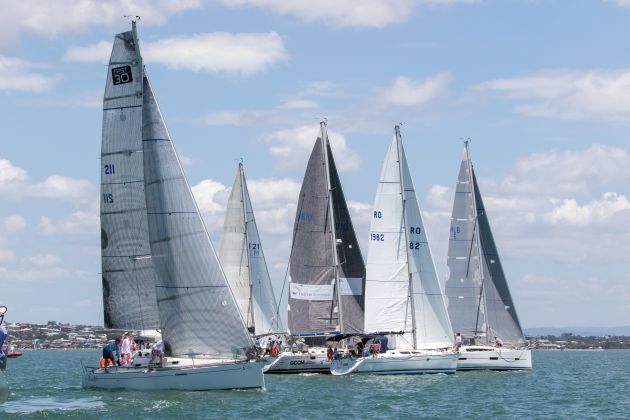 It’s now just over a month to the Queensland Beneteau Cup and French Yacht Challenge on the Oct 28/29 weekend.  The Yacht Brokerage are principal sponsors, and the event, which is organised by the Qld Beneteau Owners Group, will be hosted by the Royal Queensland Yacht Squadron.

Now in its eleventh year the event comprises two passage races over two days in Moreton Bay.  The French Yacht Challenge, on Sat 29th is open to all French production boats (Beneteau, Jeanneau, Dufour etc), while the Beneteau yachts combine their results from the Saturday race with those from a second, Sunday race for the Queensland Beneteau Cup.

Racing is conducted in two divisions – Cruising and Performance, with the emphasis on fun on the water combined with social activities ashore.  Cruising Division entrants can elect to sail avec or sans spinnaker.  Support from loyal sponsors enables the awarding of multiple trophies for both events.

Jane Virtue, Secretary of the QBOG and regatta organiser commented, “Over ten years the regatta has grown to become one of the major social regattas on the Moreton Bay racing calendar.  In past years we have welcomed entries from yachts returning south from the Airlie Beach, Hamilton Island and Magnetic Island Race Weeks, and we look forward to showing visitors the excellent facilities at the RQYS marina and new clubhouse.”

The Yacht Brokerage took over the Qld Beneteau dealership two years ago and continues to provide foundation sponsorship for the event, using it as an opportunity to catch up with owners and showcase new Beneteau models, which this year includes four new Oceanis models.

With up to thirty entrants, the two division and passage race format provides a level of competition for both experienced and novice crews, and entrants are encouraged to adopt the French flavour of the weekend by dressing both themselves and their yachts in a French style, with a special trophy being awarded for the best dressed crew.

For entries and more information visit the RQYS website or email jane.virtue@bigpond.com.