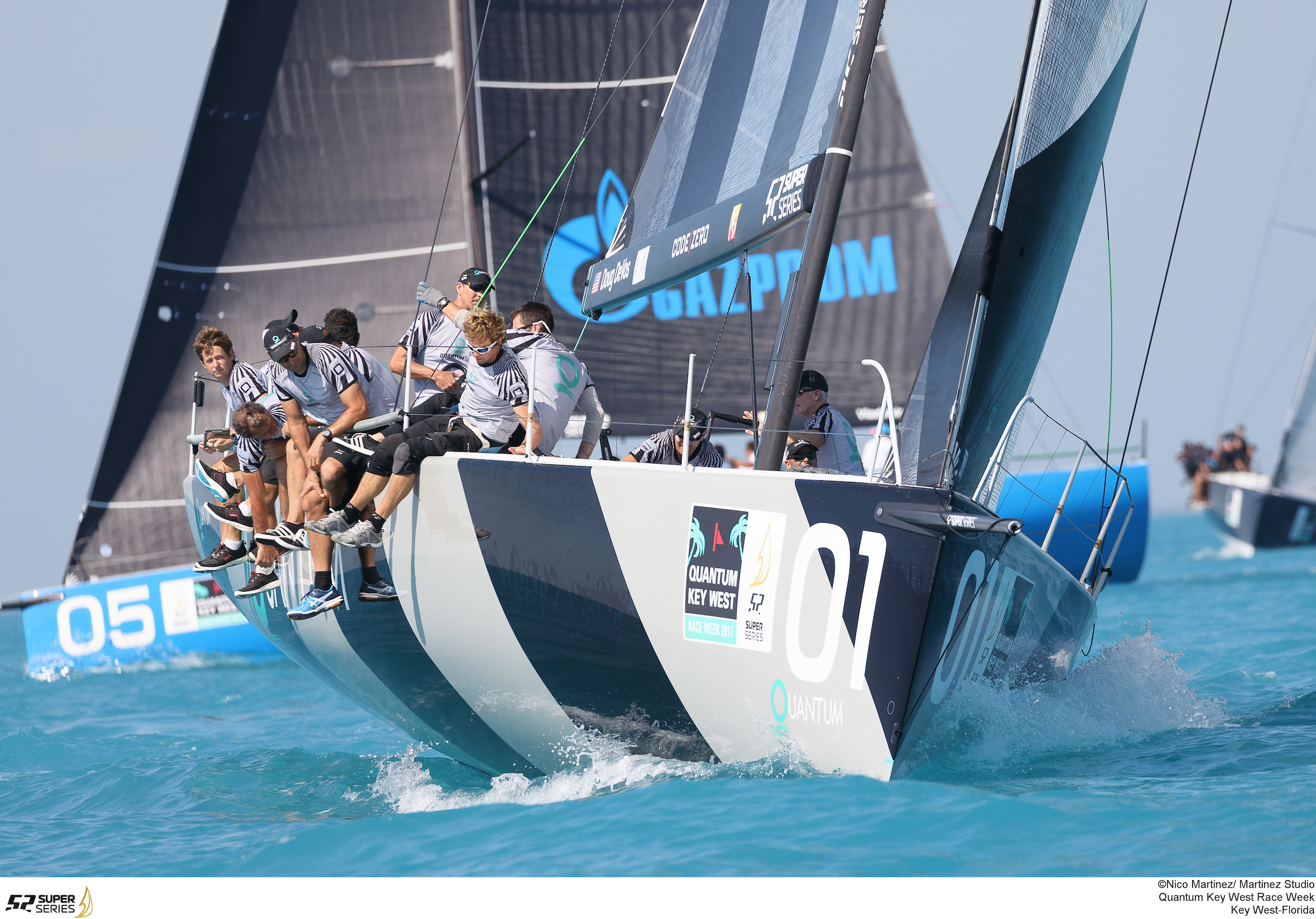 Showing the winning hallmark of a crew that are current 52 SUPER SERIES champions, and three times holders of the title, Doug DeVos’s Quantum Racing team came back from an uncharacteristic high scoring, mid-regatta, three-race slump, to close out the first regatta title of 2017, triumphing in today’s last race of Quantum Key West Race Week. Wednesday’s 8,7,9 accumulation of 24pts was immediately counterbalanced by a second and two first places. With DeVos on the helm, Terry Hutchinson calling tactics and newcomer Bora Gulari completing his first regatta as strategist, Quantum Racing today were quickest off the start line in the very light southerly breeze and led at every mark. The circuit title holders stepped well clear of what proved to be an incredible six-sided tussle for the remaining podium places.

When the final finish guns had sounded, the dust settled and heartbeats dropped closer to normal, Harm Müller-Spreer’s Platoon took second place overall but only on a three way tie-break with Niklas Zennström’s Rán Racing. They are credited with third ahead of Ergin Imre’s Provezza.

All three finished the 10-race curtain raiser regatta locked on the same tally, 49pts, but perhaps the crew feeling the most anguish will be Provezza.

They led into the final race by two points but lost out on the start line and rounded the top mark in 11th place and fought back to ninth. Ending up fourth, Provezza helmsman Peter Holmberg noted wryly:

“It’s tough to sniff the win then fall to fourth.”

Provezza may today rue their final start, but during the week most teams had at least one big let down, Interlodge had an 11th when a lifeline gave way, Azzurra unnecessarily locked horns with Paprec. Platoon started poorly in the second race on Thursday. Such episodes may be more memorable for the teams, and observers, but in truth the single points have never been more valuable, harder than ever to gain and easier to shed.

So each crew will leave Quantum Key West Race Week contemplating similar circuitous discussions, soul searching and debriefing the lost places. But at the same team at least six teams leave the Conch Republic today having empirically validated their belief that they have hardware, performance and personnel to win regattas.

“For us the good news is: I’m not expecting a season like last year where Quantum is so far ahead of everyone and only a few guys are fighting for second, third and fourth. I think this season is much more open than last year.”

All of the top three boats at this regatta, from the 11-boat fleet that represents seven different nations, are steered by owner-drivers, DeVos, Müller-Spreer, and Zennström.

The five-day regatta provided a fulsome range of wind conditions, starting out with 17-20kts of SE’ly breezes for two near identical days Monday and Tuesday. Platoon’s season opened with two wins Monday but they went 6,6 on Tuesday. Because the breezes were forecast to drop, the race officers ran three races Wednesday in 10-11kts, and by Thursday-Friday the fleet were in light wind modes, in 6-8kts for the last three races.

After missing out to Azzurra at the last regatta of 2016, this win highlights the fact that Quantum Racing are still considered the benchmark team, but many teams are getting closer and closer, not least the four crews in the Quantum Sails programme. Together, Quantum Racing, Platoon, Gladiator and Interlodge won eight out of ten races. Regatta sponsor, 52 SUPER SERIES stakeholder, but most of all passionate helmsman who loves his sport, Doug DeVos concluded:

“What a compression of the fleet throughout the week, and it was anybody’s regatta right up to the last race. Up the first beat we were able to sneak out and get in front and it all worked out for us. What a great regatta.”

Of the intense pressure on the final day, DeVos reveals Hutchison’s watchwords:

“He was saying breathe and calm down. That’s the main thing. Calm down. And sail like we know how. Don’t over think it. Just let it happen. Sail crisp but remember our fundamentals. Don’t try to do too much, sail the way we’re supposed to. That’s why the breathing helps, to calm down and don’t let the moment get too much of us and just sail the boat. And it worked out.

Winning here is just wonderful. And it’s always because you know there’s such great competition and there’s so many great competitors. And you have a chance to sail against the best sailors in the world on this boat, which is an incredible platform, and to be able to win in this environment is wonderful, but it’s short-lived, because the next regatta you start from zero again.”

It is the second time in the 52 SUPER SERIES that Platoon has finished second. In 2015 they only just missed out on the world title; in Mallorca at Puerto Portals. Owner-driver Müller-Spreer smiled:

“It’s pretty fine. If somebody would’ve asked me in advance if I would take a second place overall, I would say yes, definitely yes. I’m not disappointed. We are on a really good track and I can see big potential in this team, this boat. So looking forward.”

Race 10: Quantum Racing Perform Under Pressure
The southerly breeze was as light as six knots and rarely cracked into the double digits. And there were shifts and holes galore. Quantum Racing avoided pre-start entanglements, starting cleanly on the middle of the line. Skipper Doug DeVos and tactician Terry Hutchinson turned a bit more wind on the left side of the course into a solid lead at the top mark.

Interlodge – who started at the pin, but downspeed after a tense pre-start battle with Provezza – was second, with Bronenosec, Sled and Azzurra also in the top five. Notably absent were leaders Provezza along with contenders Platoon and Rán Racing, all of whom struggled on the first beat.

While it wasn’t the sort of day to take any lead for granted, Quantum did a solid job of playing defense the rest of the way. By the time the defending champions turned the final mark and headed for the finish, first place in the regatta was a foregone conclusion.

The real question was who would take the remaining spots on the podium. That place was decided by the slimmest of margins. Harm Müller-Spreer’s Platoon battled throughout the race for a seventh, which was good enough to guarantee them second in the regatta, winning on countback from Niklas Zennström’s Rán Racing and Ergin Imgre’s Provezza. Azzurra and Bronenosec tied for fifth, with the Italian/Argentine team winning that battle. In seventh was Interlodge, who lost a chance on the podium when Bronenosec slipped past on the first run. In all, just two points separated second from seventh.