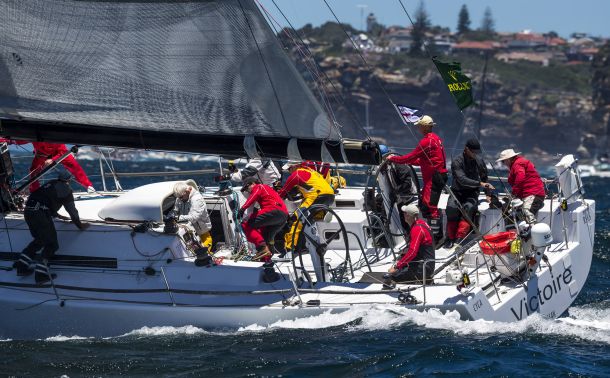 Among the recent entries received for the 2015 Land Rover Sydney Gold Coast Yacht Race are a trio of yachts representing as many states, their owners looking forward to helping celebrate the 30th edition of the Cruising Yacht Club of Australia’s Blue Water Pointscore opener.

Darryl Hodgkinson from the host club returns with his 2013 Rolex Sydney Hobart winning Cookson 50, Victoire, intent  on bettering his seventh overall of last year, while South Australia’s Geoff Boettcher has replaced his 2010 Sydney Hobart winning Secret Mens Business with a TP52 of the same name and Olympian Matt Percy is bringing Alacrity down from Queensland.

Victoire and Secret Mens Business will be among the front runners for overall honours in the Cruising Yacht Club of Australia’s 384 nautical mile race, joining the likes of last year’s winner, Sam Haynes with his newly purchased TP52, Celestial and Roger Hickman, who won the 1991 and1994 races with Wild Rose, the same boat he sailed to victory in the Sydney Hobart last year.

In January, Boettcher purchased the 2009 TP52 World’s winner, Matador, which then became Karl Kwok’s Team Beau Geste in 2013 and won the TP52 Southern Cross Series. In 2014, Kwok adapted the boat for IRC racing and dominated to win the NSW and Australian IRC Championships, then took the boat to Asia and won the Kings Cup.

‘Boettch’ has since sailed the yacht under his trademark Secret Mens Business name, finishing eighth overall in the Adelaide Port Lincoln Race and going on to win Port Lincoln Race Week Regatta, putting him well on track for a solid result in the Land Rover Sydney Gold Coast Yacht Race.

Percy, who owns the Beneteau First 44.7, Alacrity, is the fourth Queensland entry received to-date. Competing for Australia at the at the 1986/1987 America’s Cup, Percy went on to crew for Bobby Wilmot in the Soling class at the 1988 Seoul Olympic Games. This is the first time since 2007 Alacrity has competed in the race which at Southport Yacht Club where Percy is a member.

“This is what makes the Land Rover Sydney Gold Coast Yacht Race the event that it is today; yachts from all over the country coming to compete against the locals in what I consider is the pinnacle winter event,” the Commodore said.

“Having this race reach 30 years is a reflection of what can be achieved with solid race organisation, education, promotion and execution. I think that’s why it continues to attract quality entries from far and wide and will continue to grow and be recognised in many years to come.”

Other entries received in the past week include Quikpoint Azzurro, the S&S34 salvaged and completely restored by Shane Kearns; Merlin, the Kaiko 52 owned by Olympic gold medallist Dave Forbes, along with Mortgage Choice Rumba. The Northshore 370 is owned by Robert Carr, Kerry Burke and Stephanie Cook who will be pinning their hopes on PHS success.

Approximately 60 yachts are expected to take part in the Land Rover Sydney Gold Coast Yacht Race, which starts at 1300 hours on July 25 from Nielson Park on Sydney Harbour and finishes at Main Beach, Southport.