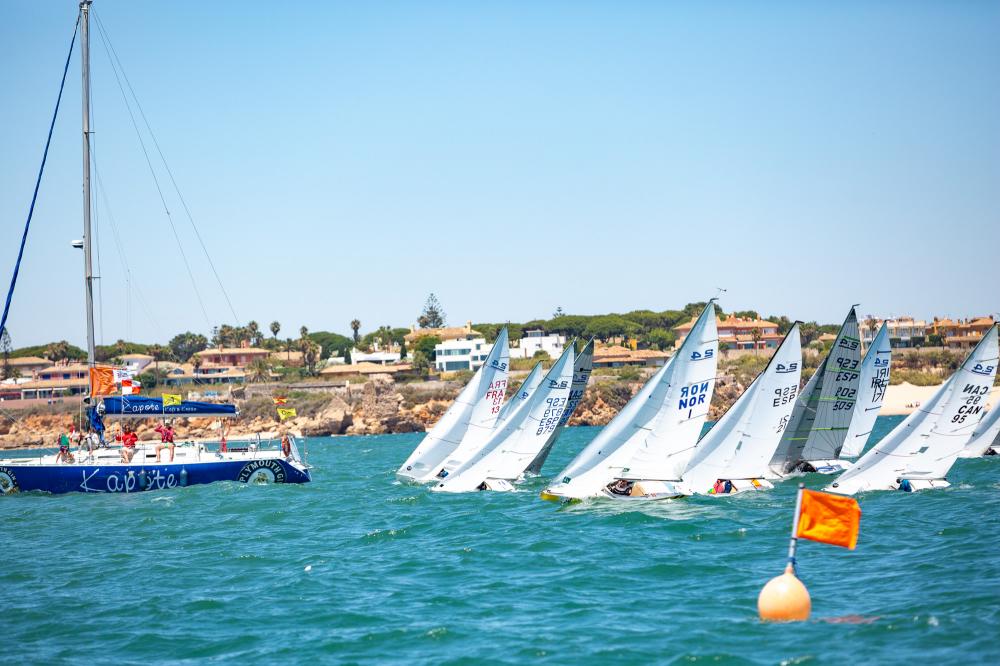 On the last day of fleet racing at the 2019 Para World Sailing Championships in El Puerto de Santa María, Cadiz, Spain, the line-ups for Sunday’s final showdown were confirmed.

Thirty-three boats will battle it out on the Bay of Cádiz tomorrow in a bid to be crowned as champions of this year’s Para Worlds.

In the smallest class, the Hansa 303 Women, six sailors out of 12 will contest the Medal Race on Sunday.

It is the fleet with the tightest points difference at the top, with just nine points separating Violeta del Reino (ESP) in first and Olga Gornaś (POL) in fifth.

Breaking into the top three today was Alison Weatherly (AUS), who scored two wins and a third to leapfrog Gornaś and Ana Paula Marques (BRA).

“It was pretty good out there. There was a bit of breeze which I like, and getting two firsts takes a bit of pressure off ahead of tomorrow,” Weatherly said.

“There have been a few ups and downs for me this week. Day 2 was a lot lighter, and I’m heavy compared to a lot of the other girls, so that didn’t really fall in my favour with the chop. The other days I think I’ve done alright – tried to keep myself in clean air and stay out of trouble.”

The 2018 Para Worlds in Sheboygan was Weatherly’s first, and she revealed that putting in the work in training has helped her feel much more confident this time around.

“Last year I was out of my comfort zone and didn’t do very well. I got into a mess in my own head and struggled to get out of it,” she admitted. “I was aiming for redemption this year, and I feel like I’ve done that.

“I’ve been working really hard going to a lot of regattas at home and Chris Symonds, the current Australian Men’s world champion fighting to defend his title, has been really helpful with advice.

“My goal before coming here was top five, so I think I should manage that fairly comfortably, and then everything else is a bonus.”

Symonds is part of the 10-strong Medal Race line-up in the Hansa 303 Men’s fleet, where he will aim to topple Piotr Cichocki (POL) who currently leads by 13 points.

Perhaps the surprise performer of this fleet is Chi-Chian Wu (TPE). He finished 10th overall in Sheboygan last year, but here in Puerto Sherry, he heads into the final day in third position.

Although Wu now has a decent shot at getting onto the podium, he insisted he will be happy regardless of how it goes tomorrow: “Winning a medal wasn’t part of my plan before the championships,” he revealed.

“I only got 10th place last year, so my plan this year was to try and reach the Medal Race again. Last year I used to get nervous and panic really easily, so I didn’t do so well, but this year I feel more stable and can deal better with bad situations.”

Wu is the only sailor from Chinese Taipei at the Para Worlds, and he wants to try and see the Hansa 303 more widely used back home.

“It’s really important because we don’t really have the Hansa there, so if I do well, maybe people will see that it could be a good choice to help disabled people sail, and hopefully we could get more Hansas there and set up a program in the future,” he added.

In the 2.4mR class, it’s hard to imagine anyone other than Damien Seguin (FRA) being crowned this year’s champion.

The Frenchman has won seven races in a row over the past three days, and he takes a six-point lead into the 10-boat Medal Race on Sunday.

Of course, it’s not over yet. Fellow Paralympian Antonio Squizzato (ITA) has been keeping Seguin on his toes, as he sits second overall.

By his own admission, the Italian has not sailed perfectly this week, but he is satisfied with his overall performance and wants to finish strongly to own a medal.

“I’m happy with how I have sailed, although I made some mistakes on the first two days and lost out in some situations where I could have won the race,” Squizzato said.

“I’ve had some good battles with Damien – but he always wins!

“This is a beautiful place for a regatta and the wind is very interesting so it makes it difficult.

“I am near two sailors, the Norwegian Bjørnar Erikstad, and the Spanish sailor Arturo Montes.

“Tomorrow there is only 10 boats and we must do our best because it is not finished yet.”

In the RS Venture Connect, the winner-takes-all system makes the stakes even higher for the sailors.

Leading by seven points at the top, John McRoberts/Scott Lutes (CAN) have automatically qualified for the final.

The next six teams, from second to seventh places, go into the semi-final race, where the top three finishers will join the Canadians in the final. In that last showdown, the gold, silver and bronze medals will go to the first three over the line.