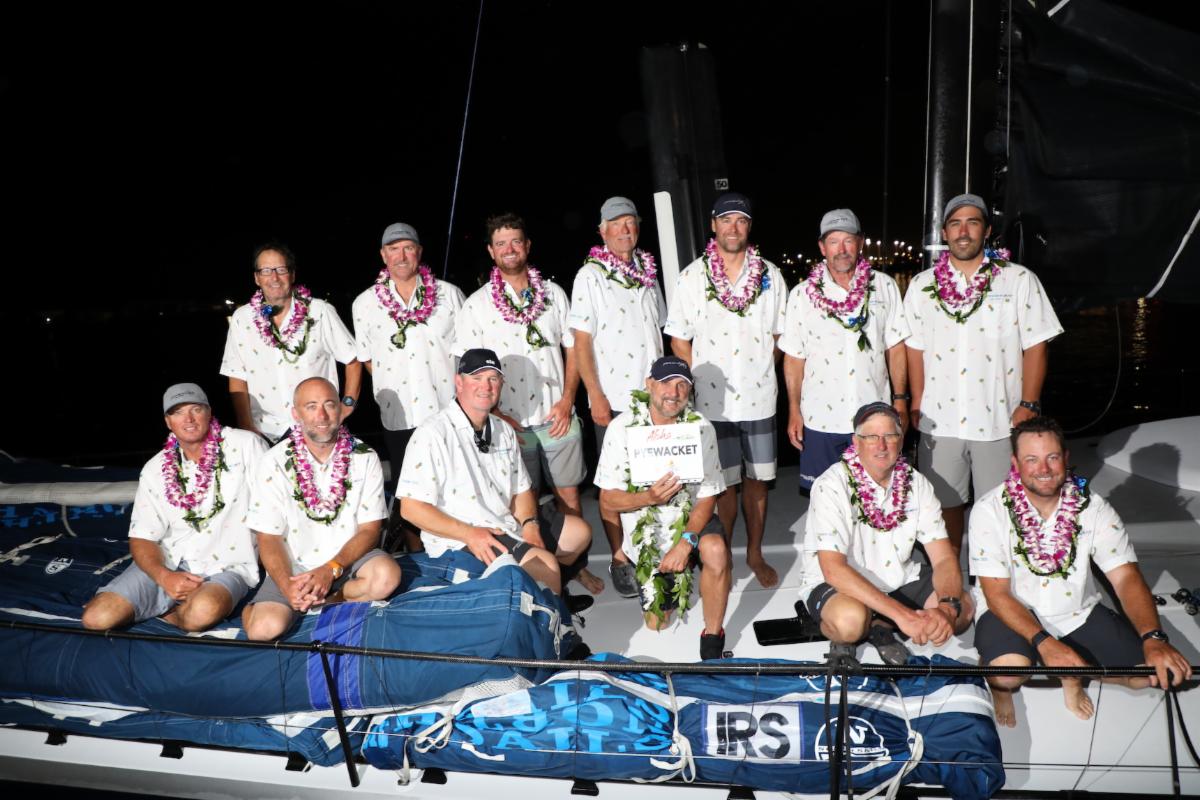 While not breaking the five-day two- hour course record set in 2017 by the VPLP 100-footer Comanche, this was still an impressive feat, as she averaged 16.3 knots over the entire 2225 nautical mile course.

Knowing they could not defeat the course record, the team decided instead to go after another record: the longest 24-hour run in the race.

Navigator, Peter Isler, laid out the scenario. Rather than gybing on wind shifts to reduce the distance to the finish, they would extend to the north corner of the course, gybe once, and head at high speed for Oahu. The tactic worked; in 24 hours yesterday, the team sailed 506.4 miles, at an average of 21.1 knots of speed.

“A dear friend of mine, Stan Honey, used to own this record,” quipped Disney, “so we thought ‘why not’? We’re not going to win overall [on corrected time], so why not go for that one. It was pretty special.”

Asked about what it’s like to go this fast, Disney said “This boat is very deceptive. If you’re doing 15 knots, it doesn’t make a noise and you don’t even realise you’re going that fast. At 21 knots, it makes more noise, for sure. This boat is a beast, but a fun beast.”

As Telefonica, this boat participated in the 2011-12 Volvo Ocean Race, but has since been turbo-charged with a spar 3 meters taller and a keel 2 metres deeper than VO 70 class trim, allowing for more horsepower and higher speeds.

“A ton more sail area and much livelier than a standard Volvo 70,” he explained.

There was another personal record set for skipper Disney: since he sailed his first race as a lad in 1975, Disney has raced to Hawaii 25 times, more than any other skipper or crew in the history of this race…except one: Disney’s own team mate Gary Weisman, who has now also raced Transpac 25 times.

“This race has an allure,” Disney said. “I’m standing here on the dock already thinking about what to do better for the next race. That’s what this race does to you!” He also gave full credit to his team for sharing in the success.

“I’m fortunate to sail with a group of very close friends who are family to me – this is my family. It’s an extra joy to sail this well and with this group of friends.”

Another crew of friends and family also finished their race today, blasting into Diamond Head in a spectacular morning finish filled with big waves, high winds and plenty of spray.

Until being overtaken by Pyewacket yesterday, Cecil and Alyson Rossi’s Farr 57, Ho’okolohe, was out in front of the entire fleet for most of this race, being the fastest boat in the first wave of Division 8 starters on Tuesday, July 13.

Their elapsed time of 9 days 22 hours 39 min 36 sec made for an average speed of 9.3 knots on the course, not bad for a fast cruising boat of this type and considering the first 24 hours for all of this first group was spent struggling in light air to get off the California coast.

Next in line on the course with only 30 miles left to sail in a very rough and breezy Molokai Channel was Bryon Ehrhardt’s Judel/Vrolijk 72 Lucky. The tracker was recording impressive boat speeds of over 20 knots, when that speed plummeted to 1.9 knots. Was this a malfunctioning tracker? The team seemed pointed in the correct direction.

No, unfortunately this was accurate: the team broke their rudder and lie drifting at the mercy of the wind and waves nearly within sight of Diamond Head. Fortunately, Lucky had cleared Ilio Point on the north-west corner of Molokai. They were in no danger of closing in on a lee shore, but what a heartbreaking end to a terrific effort that had them in the lead in corrected time in Division 1.

Lucky will proceed to safety under Coast Guard tow to Honolulu harbor, about 50 miles away, and deprived of that iconic finish at Diamond Head (inset photo of Ho’okolohe, Betsy Sinescu/Ultimate Sailing).

Next in the queue to the finish is Chris Sheehan’s Pac 52 Warrior Won, burning the miles at 17 knots of boat speed and 170 miles left at 2:45 PM HST. Their icon has also been wearing a crown for leading their competitors in Division 3, and fingers crossed they have no Molokai Channel mishaps en route to their expected finish at about 3:00 AM local time.

Meanwhile, more sea stories from the race course include this from Steve Sellinger’s Santa Cruz 50 Triumph who is in hot sun, 18-22 knots of wind, and 3-6 foot seas:

“Last night was fun-filled terror with a series of squalls. I have never liked squalls and after last night I hate them even more. We drove right in to the heart of the death star squall but came out the other end.

“Nick [Gan], Jeff [Thorpe], and David [Liebenberg] (aka Spider Monkey) were on deck sailing in 22-25 knots of breeze, and when about to be eaten David asks for relief and Jeff looks to me and says your up and I say NFW bud – that is above my pay grade. Jeff told The Spider Monkey to sit tight because we are not changing drivers during a squall.

“Moments later it was game on. We were swallowed whole and wind speeds quickly reached 30-33 knots with torrential rains. The rest of the crew was bunked below. Brad [Wheeler] and Chris [Snow], were reported to be listening as Triumph hydroplaned and we yelled to each other about the rapidly changing conditions.

Justin reportedly silently thanked David for his timing as Justin had just done a tiring four-hour shift. Zack [Hanna] slept through the entire event. The Spider Monkey kicked the death star squall’s ass! He is the boat MVP today. Only one day because we can’t let this go to his head! We survived and are stronger for it.

“We are all eager for dry land, a Mai Tai, shower and a bed that doesn’t roll all night spitting you from side to side. We are eager to see our loved ones.”

Full results and all information:https://transpacyc.com