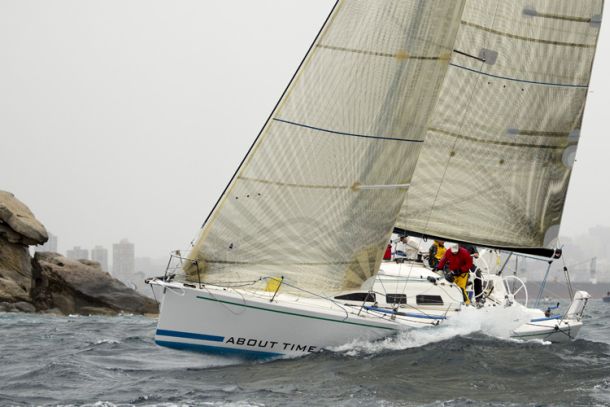 About Time cleaned up IRC and ORCi. Photo David Brogan

Psaltis and crew sailed their Ker 40 to a win over two TP52’s in Balance and Fomo, also beating fourth placed Merlin, Dave Forbes’ Kaiko 52 to the punch in what was predominantly a big boat race. “It was a real buzz to beat them,” Psaltis said.

“We sailed out of the Harbour with a big masthead Code Zero that we couldn’t hold, but we were going very fast. With the wind in the south-east and east-south-east, we sailed close to the rocks when we got around the corner. You can’t afford to go offshore in those conditions.”

Psaltis said it was lumpy once they left the Harbour, “But the crew did a great job. My son Ben did bow. He was sick, but went straight back to the job. He proved himself and made me proud – he’s a third generation sailing Psaltis. Chris Rockell did a lot of the steering and did a great job.”

Overseas on business, OPS winner Farren-Price missed the moment, having to leave the final race and his Cookson 12 in the hands of longtime crew and sometime skipper, Shane Guanaria. But he did so knowing his crew had morphed into an almost unbeatable unit since the first of their victories.

The modest eastern suburbs yachtsman collected an unprecedented fifth consecutive OPS title; his ninth win out of 11 seasons with About Time. He and the crew are so good they won both IRC and ORCi pointscores.

Speaking on behalf of Farren-Price, Shane Guanaria said: “He would have loved to be here, and the race would have suited him down to the ground.

“We battled early on and made a few mistakes,” he said of their seventh place in the race, which translated to third in the series, as four of those who finished ahead of them were casual entries. “Ed (Psaltis) had a great race. He’s such a good yachtie. It’s good to see him get a win. He’s hard to beat.”

Guanaria said the first part of the race was difficult. “The seas were sloppy and confused and we were between sails and overpowered,” Guanaria said. “Once we got to Botany Bay it freed up and settled then the fleet formed a picket line down the course – there weren’t really any passing lanes.”

Winds during the race oscillated between 150 and 110 degrees at anywhere between 14 and 24 knots, giving the 21-boat fleet a genuinely hard work-out.

Guanaria said About Time’s owner and crew deserved every accolade they’ve received. “I know Julian always praises his crew. And he is lucky with crew he has – they know the boat and their roles so well and make very few mistakes. And Julian’s smart in how he goes about his boat and sailing. He doesn’t rush into things, he considers first. He runs a good program. I’m happy I could contribute to their win,”