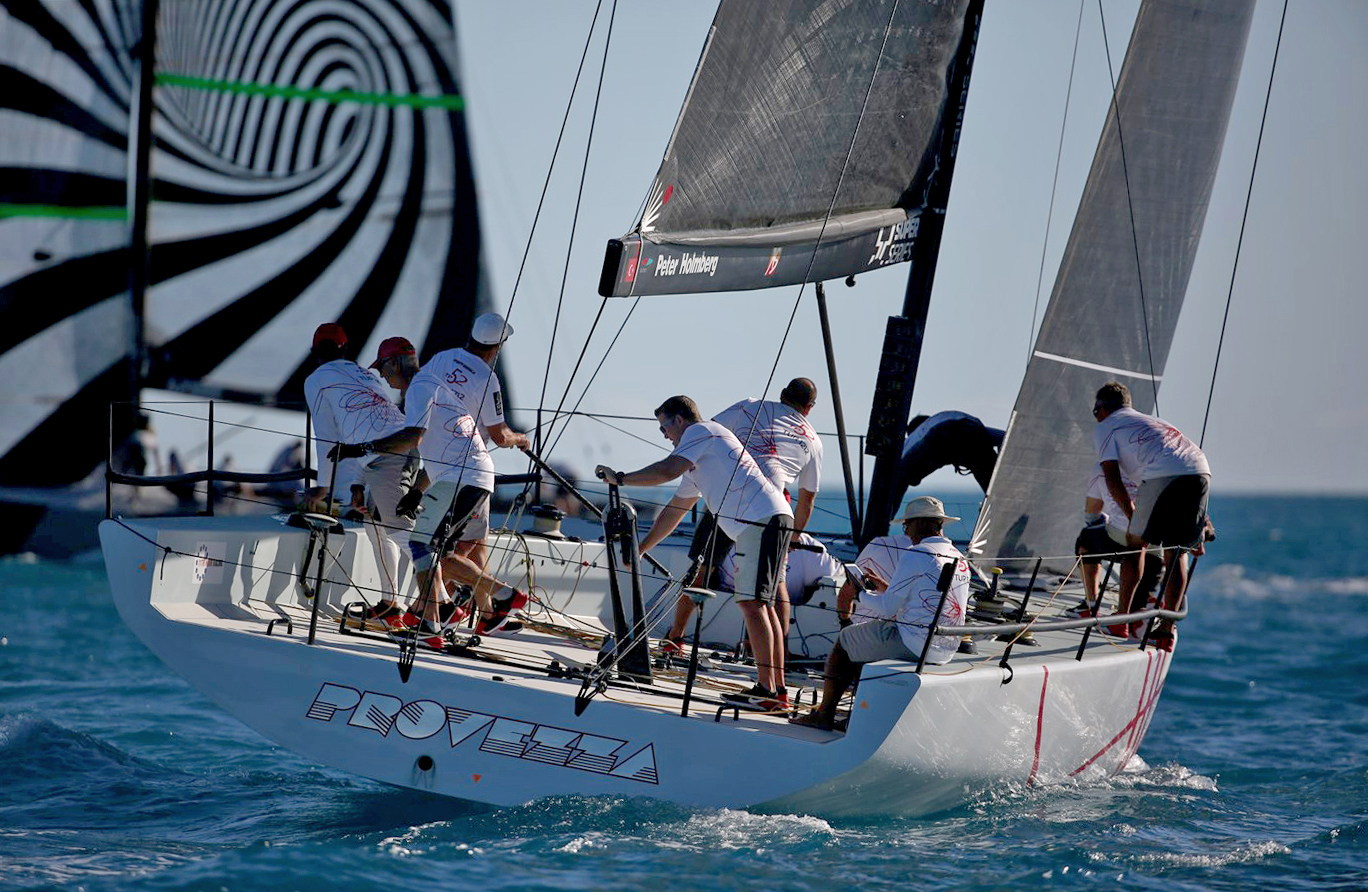 The Provezza team finished their 2016 season disappointed. As one of the key contenders for third overall on the end-of-season podium, their challenge faltered at the final hurdle when they went 9,9,9 from the last three races at the EGNOS Cup in Cascais last October.

The short off season was put to the best possible use, the post season debrief and analysis resulted in small changes to the crew line up, to their boat, set up, looking to make strengths from their weaknesses.

Biggest change is Peter Holmberg coming in to steer. Since an eighth and ninth from Monday’s opening two races Provezza have yet to win a race at this regatta but their fifth and third today is typical of an assured consistency which sees them with a fighting chance of winning the six event season’s first regatta.

“We made a few changes, a couple of crew changes a couple of mode changes to the boat, a few sail things. It’s just a lot of small refinements.” Tactician and project manager Tony Rey explains, adding with a smile, “We’re still capable of a disaster like anyone else. But we feel good, we’re sailing the boat well and we’re going better in light air, which we haven’t done in the past. We’re really pleased with it. It’s probably the way we’re sailing it. It’s a little bit of technique changes and just learning the boat as well as a little time away and now coming back. Having Peter Holmberg here as the helmsman has been a nice jolt of fresh energy. Sometimes that’s what it takes to get guys going.”

Two races were sailed in light SE’ly breezes today. After a three race 24pt ‘black Wednesday’ which ballasted their Key West title hopes heavily downwards, Quantum Racing fought back with a 2,1 today to earn a share of the three way tie with Azzurra and Platoon, all two points behind Provezza. And Niklas Zennström’s Rán Racing are only one point behind them. Five boats go into the Friday finale within three points of the lead.

Quantum Racing’s Terry Hutchinson had typically spoken about taking a hard look in the mirror, reviewing mistakes and then wiping the slate clean and coming out today ready to compete. In fact the champions Quantum Racing returned to doing the basics well, making the best two starts of the day to vault from sixth place nine points off the lead into that three way tie. Hutchinson may have sought to shoulder the blame for a lot of Wednesday’s heavy points tally but owner-driver Doug DeVos reaffirmed his team’s cornerstone belief:

“It’s all about team. We win together and we struggle together. We had a little delay in the morning so we spent a little time thinking about what we could do to improve in each and every area of the boat. As we came in this afternoon we said, ‘Hey we did all those things, we made those little improvements and it showed.”

Breezes for the one race showdown are expected to be slightly steadier, perhaps up to 10-11kts, but the team which emerges with the Key West title will take huge satisfaction from winning the most open, competitive and closely fought regatta for many years on the 52 SUPER SERIES.

Race 8: Rán Racing Jumps into the Fray With a Big Win
Looking to atone for the previous days trio of poor results, Quantum Racing took the mid-line position and started on time and at pace. The defending champions, along with Rán Racing, worked the left side and turned that into a lead at the first mark. The two teams traded blows the rest of the way with Rán Racing getting the better of the battle and winning. Quantum Racing took a satisfying second with Platoon working back into third.

Race 9: Quantum Racing Imposes Its Will On the Fleet
For the second time in two races, Quantum Racing was strong off the line and worked the left side on the first beat to round the first mark with a slim margin over Azzurra and Interlodge. With the fleet relatively close through the first leeward mark it was the third leg of the race the was decisive as the fickle breeze proved very hard to predict. The lead boats once again worked the left side—something of a theme in this event—but the breeze went hard to the right halfway up the beat. By working the center of the course, Quantum Racing was able to take advantage of the right shift and extended away. Interlodge survived for second but Azzurra, which was in a position to take advantage a difficult race for Platoon, struggled to recover and found itself fighting for the middle positions on the final run. Provezza, used the right side to move up the ladder at a crucial time in the regatta and finish fourth.

“This is a great group. They’re all very confident, even after we have a challenge. It’s like well strap it up and go back out, just get back to basics and try to find out way back. But every boat is like that, everyone in the fleet has bad days and good days.”

“Yesterday was a tough day, yet so much of it was self-imposed. We had a great chat yesterday on the way in as a team and I think as I said to the group and in our debrief, really the only person I’ve got to blame is the mirror. It was no more complicated than me getting my stuff together.

What we did well today was we started well. That. Evolves around a couple of things. We started well, better communication and we had a lot of discussion about trysting your instincts and doing the things that you feel are the right things to do. When it’s really shifty puffy and you’re not certain there’s a fair amount of instinctual things that you just have to do. Talking to our tuning partners it clearly wasn’t obvious so that gave a little bit more confidence to just roll with it.

Today was a good day. We got two good starts. It was disappointing to give the lead to Rán in Race 1, but we played a bit safe and learned a couple of things with the moding of the boat out of the top mark in that wind condition. All to play for tomorrow.

We are. I’m still made about yesterday. Everybody on the boat has done a really really good job and we just didn’t make it easy for ourselves yesterday. If we’re not successful we’re going to know way. I guess that’s the best part about it. We won’t be sitting there scratching our heads.

Provezza’s done a great job just chipping along and I think it’s us and Azzurra and Platoon tied on 42 and Rán on 43. It’s a pretty good indication of what the racing and the competition is like.

“We made a few changes, a couple of crew changes a couple of mode changes to the boat, a few sail things. It’s just a lot of refinements. We’re still capable of a disaster like anyone else. But we feel good, we’re sailing the boat well and we’re going better in light air, which we haven’t done in the past. We’re really pleased with it.
Going better because?

It’s probably the way we’re sailing it. It’s a little bit of technique changes and just learning the boat a little time away and coming back. Having Peter Holmberg here as the helmsman has been a nice jolt of fresh energy. Sometimes that’s what it takes to get guys going.

[The offseason after a disappointing end to 2016] It was a bit of evaluation and to find out how we’re going to come back and play hard in 2017. Ergin is a fantastic patron of our sport and a great sportsman himself. He said I want to keep the guys together, I want to make a few sublte changes and let’s see what we can do. So far so good, but we’ve got another day tomorrow. Let’s see what happens.”

“We didn’t do that great in the second race. We had a poor start and it was tough coming back in the lighter air. All in all it wasn’t the worst day for us. We’re happy to be in it for tomorrow and looking for a good battle.

We’re getting better each day. Maybe the results don’t show it, but for sure our attitude on the boat [is improving], we’re learning a lot, and improving each day and getting better.

It’s been quite good, the four-boat Quantum Racing program. The debrief is quite big and at first I was like “Oh my god, it’s a little overwhelming.” But at the end of the day it’s been quite good because we have information, a lot of good information, from four different boats. The results are showing that the Quantum boats are doing well in this regatta. I think it’s working.