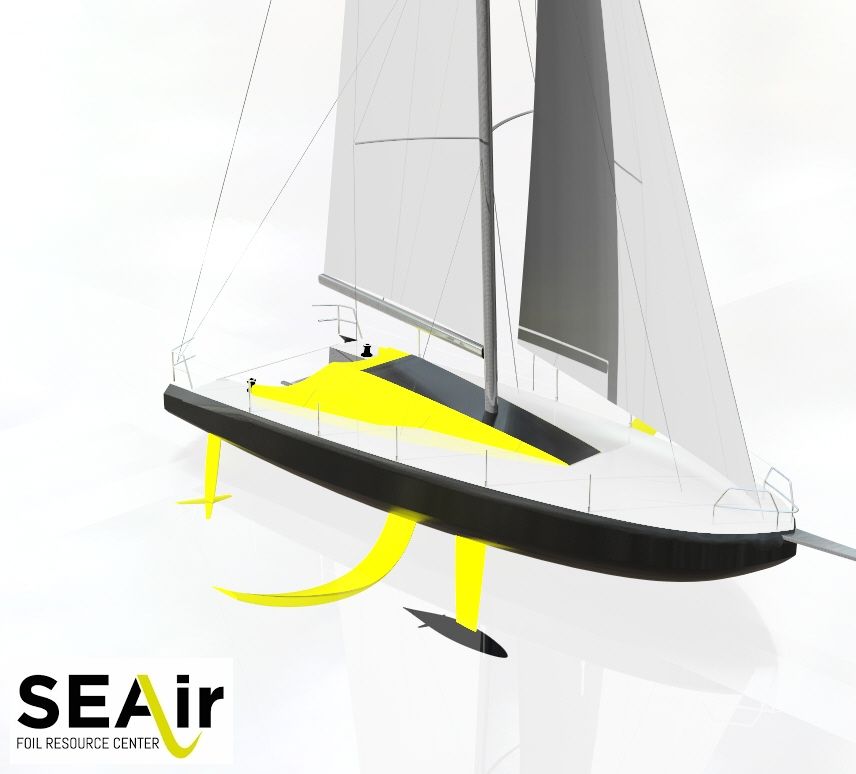 Things are taking off in the foiling world. The new custodians of the America’s Cup have created another key landmark in foiling development with their announcement of a ‘fully flying’ monohull, the new AC75 which will be the new boat for the next America’s Cup. Also playing an important part in the development in the new hydrofoil world, SEAir has announced the first flying 40 foot monohull which will begin construction in 2018.

Following the maiden flight of the Mini 747 in 2017, SEAir, led by Richard Forest and Bertrand Castelnerac, has established itself as a key player in creating foiling flight solutions. With patented systems and two years of studies that allowed the Mini 747 to fly above the sea’s surface, SEAir’s design office looked at flying larger boats and have now created a foiling 40-footer (12 metres).

“Imagining a line of big brothers starting with the 40-footers, is becoming more normal for us. Our design studies and tests have also led us to ask some essential questions. Developing this type of boat takes a long time, there are no shortcuts. But it is clear that, whatever the size of the foiling boat, it will be faster than non foilers of the same size in most conditions,” says Bertrand Castelnerac, co-founder of SEAir.

But the 40-foot foiling SEAir is more than simply a concept and already has six potential major clients around the world. This type of boat is well suited to both record attempts and offshore races as well as being an exciting looking boat. The first 40-footer is expected to be launched in late 2018/early 2019.

Sights set on the America’s Cup!

Having recently announced the design of the new boat for the next America’s Cup, the New Zealand Cup team has caused a stir, as well as paving the way for SEAir to become leaders in the field of foil design and build.

“The future AC75 ‘Full flying’ monohulls as announced by the New Zealand America’s Cup team reinforces SEAir’s efforts in foil research, particularly when it comes to canting. Because we are swinging the foil and not retracting it, we can achieve better stability with a lower centre of gravity. Given the complexity of the foils on the AC75, you then have to ask, who can build them? This is where SEAir’s experience in automated manufacturing of carbon foils comes into play. We have already discussed these issues with three different America’s Cup teams,” added Bertrand Castelnerac.