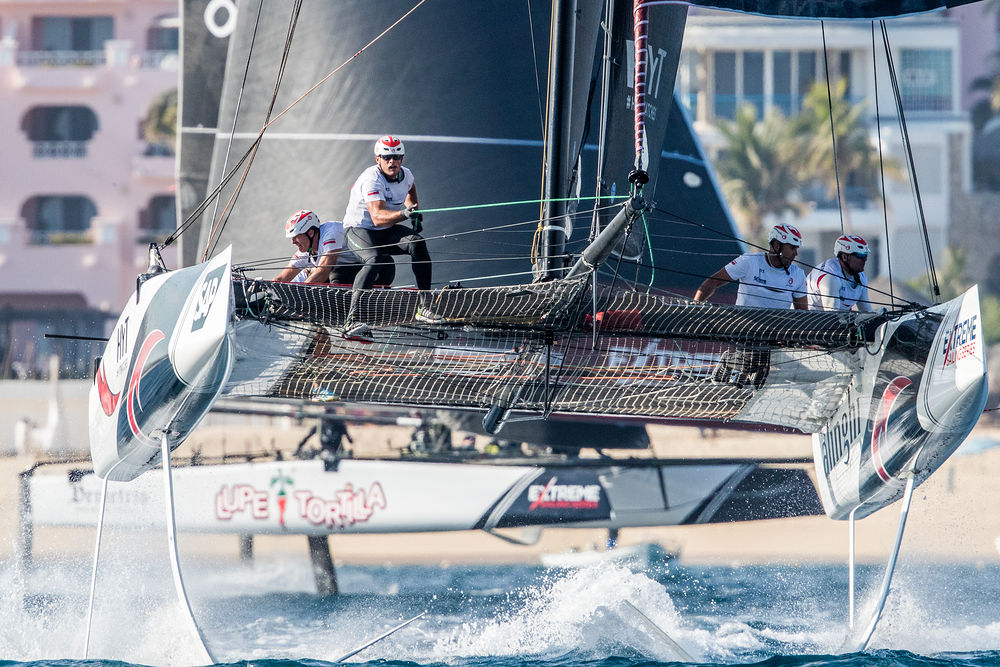 As battle commenced for the final Act of the Extreme Sailing Series™ in Los Cabos, presented by SAP, the protagonists in the fight for the 2017 title dominated the podium. Oman Air was the clear leader, finishing seven points clear in pole position.

SAP Extreme Sailing Team, the current season front-runner, was forced to settle for third behind 2016 champion Alinghi as the Series made its debut in the Mexican venue with perfect foiling conditions.

“It was a really good day,” said Phil Robertson, skipper of Oman Air. “We worked very hard and the boys were really determined, so there was a lot of focus in our eyes. It all fell into place for us with top twos in every race, and that's exactly where we want to be.

“This is just day one of a long event. We always knew this was going to be the breezy day and an important day. We wanted to make sure we cemented a good spot on the leader board and got some points in the bag and we managed to do that, so it's satisfying.

In order to claim the 2017 championship, both Oman Air and Swiss-flagged Alinghi must put at least two boats between themselves and SAP Extreme Sailing Team, as well as finishing ahead of the other. Both took advantage of the six races on the opening day to do what they could to keep the competition wide open.

“It was a great day on the water with some really good conditions. Everything went well and I think we made the right moves,” said Arnaud Psarofaghis, co-skipper of Alinghi.

“We saw Oman Air and SAP Extreme Sailing Team doing really well today. We need to keep pushing so we can sail with them. We need to be in the right spots at the right time and, with a little bit of luck, we could be in with a chance,” he added.

Although not ahead in the standings, SAP Extreme Sailing Team managed to break the speed record of the season with 33.7 knots. Helm Adam Minoprio is not deterred by the result.

“We've had bad races today but it's all good; it's a long regatta and we're still in the hunt,” said Minoprio. “That's yacht racing, it happens sometimes, and hopefully we'll have a bit more luck the rest of the week.”

NZ Extreme Sailing Team hit the ground running, winning the opening race and ending the day in fourth, while Land Rover BAR Academy finished on a high with a bullet in the closing race. The British squad, helmed by Olympic gold medallist and America's Cup sailor Giles Scott, took fifth, ahead of Red Bull Sailing Team in sixth.

Local wildcard Team Extreme México put in a respectable performance on home waters, finishing ahead of US-flagged wildcard Lupe Tortilla Demetrio, who competed for the first time at Act 7 in San Diego.

“I think overall it was a great day. It was our third day on the boat and the first day we really got to foil, so at the beginning we felt we were just setting everything up,” said Mexican skipper Erik Brockmann.

“It's obviously tough against this high standard of competition but we're happy. We just wanted to get out there, get around the course and get in amongst the fight. We're ready for tomorrow,” he added.

The double-points finale resumes at 14:00 UTC-7 tomorrow, Friday 1 December. The free-to-enter public Race Village, located on Médano Beach, is open from 10:00 local time. More information about the event, and the VIP packages that are available, can be found on the official event page.