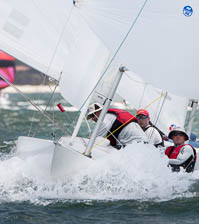 A Dragon at full power. Photo IDCA of Australia.

Champion Hobart yachtsman Nick Rogers has made a striking return to racing in the classic International Dragon class, winning the Tasmanian championship sailed on the River Derwent over the weekend. Steering Karabos IX, Rogers won six of the eight races, and placed second in the other two races against a fleet that included a Victorian and a Western Australian yacht.

The victory augers well for Rogers’ prospects of winning the prestigious Prince Philip Cup Australian championship in Hobart in January for a record 12th time, 11 as a helmsman and once as a crew.

For the past four seasons, Rogers has been racing with success the SB20 sports boat Karabos on the Derwent and in mainland regattas but decided on a return to the classic Dragon for the 2016 Prince Philip Cup.

One of Rogers’ major rivals in the Prince Philip Cup will be defending champion, 88-year-old Sydney yachtsman Gordon Ingate who recently won the New South Wales championship on Sydney Harbour.

Rogers’ Prince Philip Cup win as a crew was sailing with Ingate in Whimsical when the veteran won his first-ever Cup, on the Derwent in 2008. Ingate’s crew next January will be his long time for’ard hand David Giles and Roger Hickman, who skippered Wild Rose to victory in last year’s Rolex Sydney Hobart Yacht Race.

While Rogers, with his long-time Dragon crew of Leigh Behrens and Simon Burrows, dominated the Tasmanian championship results over the weekend, competition was close among the top boats, just seconds separating first, second and third place in all four races yesterday.

With the Prince Philip Cup regatta set for January 2-10, 2016, the International Dragon Class of Tasmania brought forward the State championship to this week and invited potential interstate competitors to ship their boats to Hobart early.

West Australian Sandy Anderson, the only woman to have won the Prince Philip Cup, was rewarded by winning yesterday’s race six with Linnea, beating Rogers by 30 seconds.

When Karabos IX took out race eight this left Rogers with a score of 8 points in the no discards regatta, second place going to defending State champion Stephen Shield, sailing Ridgeway, on 22 points. Ridgeway won race four on Saturday.

Third place went the Victorian yacht Amazing Grace, owned by Chris Stanton but steered over the weekend by Tasmanian Chris Keil, finishing with 26 points after an impressive second day of racing which included two close seconds to Karabos IX.

Rogers last won the Prince Philip Cup on the Derwent in 2012, his 10th win as a helmsman of this own boat. Ingate won the Cup on Melbourne’s Port Phillip last Janaury.