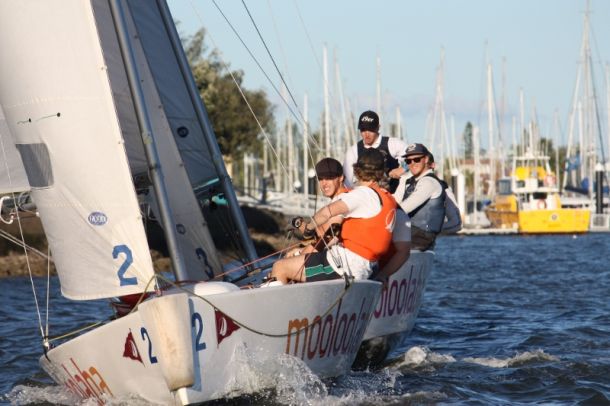 Cruising Yacht Club of Australia’s Harry Price quickly took control of the first day of racing in the Australian Youth Match Racing Championship being held by Mooloolaba Yacht Club on river in front of The Wharf Mooloolaba.

Price and his crew, Murray Jones and Ben Robinson, won five from five matches in Round Robin 1 as they quickly came to grips with the short course area inside Mooloolaba Harbour, right in front of large tourist The Wharf Mooloolaba precinct. The spectators and local sailors held their breath on several occasions as Price led his challengers through aggressive pre-start manoeuvres using the pontoon in front of Mooloolaba Yacht Club and the nearby large commercial boats as diversions for his opponents.

The youngest skipper on the course, Mooloolaba Yacht Club’s James Hodgson finished Round Robin 1 with four wins from five matches. Under the watchful eye of team coach Klade Hauschildt, Hodgson and crew Ben Vercoe and Hayden Johnson used local knowledge and confident moves to keep the pressure on their opponents.

By Round Robin 2 Price was looking to slam dunk the fleet again, but in his last match of the day before racing was stopped due to the fading light, Melbourne’s James Sly, skippering the Sandringham Yacht Club entry with Tom Dwyer and Ed James, changed the day for Price. The match in the cold and gusty south-westerly was fast, loud and tight as Sly twisted and turned his way around the umpire calls using the penalties against Price to only just beat him across the line.

Racing at Mooloolaba in front of The Wharf is scheduled to continue tomorrow from about 10am.  The forecast is for strong south-easterly which could force a change in the race schedule.