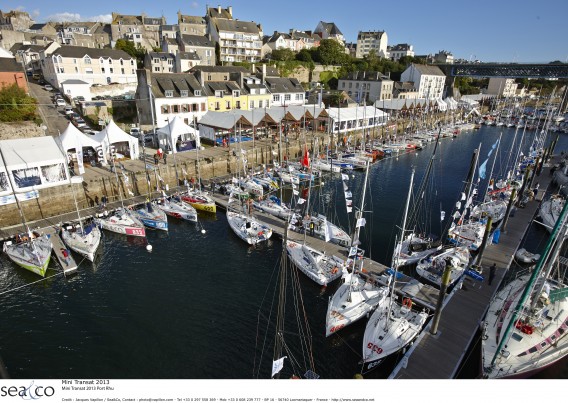 By September 9, all the sailors will have arrived in Douarnenez (France), to spend their last ten days on land before crossing the Atlantic. These days will be time for mental preparation for the solo sailors: During this long week they will feel many different emotions, and they will gradually enter into their own world and make the most of their last days on land.

It would be hard to find a more beautiful place for an off-shore race than the Port Rhu (France). In front of the docks, the 72 skippers will enjoy a perfect display of a well –preserved scene. The village of the Mini Transat îles de Guadeloupe surrounds the Port-Musée docks and the Place de l’Enfer. Port Rhu could even have been built to welcome the Minis, given that the site, with its wonderful atmosphere, is so well adapted to the spirit of the race.

An intensive sporting programme
During the ten days in Douarnenez, the skippers will not have much time to relax. Security controls, important briefings, the prologue “Everything begins in Finistère” and the boat preparation to get things ready for September 16 – the skippers programme will be full on.

– 9th September: 5pm, final time to arrive in Douarnenez (lock closing time)
– From 9th to 14th September: Security Checks. Verification of technical requirements and ensuring that boats meet race regulations.The boats need to be ready from the 16th of September, if the weather alerts are adequate for the race directors to announce the start of the race.
– 10th September: security briefing with the 24F pilots, who are responsible for security in the Gulf of Gascony , amongst other places.
– 13 September: Prologue “ Everything begins in Finistère” where each skipper will sail with a young sailor from the region.
– 16 September: Race briefing
– 18 September: Weather briefing
– 19 September: Departure at 3:30pm in front of Rosmeur port pontoon.

Plenty of meetings
The Mini Transat îles de Guadeloupe departure is also a great time for communication and building up relationships that will be helpful to the skippers throughout their race.

– From 9th to 18th September, from 5:30pm to 7pm: “Ti Mini” programme in the race village. A 30 minute programme where three skippers will be interviewed by Jimmy Pahun, Café de la Marine presenter, and PF Bonneau, official race editor and a guest.
– 9 September, 7pm: meeting with the sailors and the organising team as well as the local commercial sponsors
– 11 September, 6pm: Official opening of the Mini Transat îles de Guadeloupe Village
– 13 September, until 8:30am, leaving the lock for the prologue “Everything Begins in Finistère” to the rhythm of the Douarnenez brass bands
– 16 September, 7pm: Presentation of the skippers
– 18 September, 7pm: Official reception “îles de Guadeloupe”
– 19 September, 8pm: Mini Class soiree – the 20th edition of the Mini Transat with some of the old participants as guests

Views to be enjoyed
The Mini Transat îles de Guadeloupe village is also there to remind all who visit how stunning the race is and how beautiful its roots. In association with the magazine La Chasse Maree, the village will host an exhibition of the 20th edition of the race, going back to the first edition of 1977 up to today. A perfect way to understand the progress and the changes of the boats, the materials, the safety equipment, but also to realise how little the spirit of the race has changed.

Another exhibition will be Elisa Chohadzhieva audiovisual work on the 2013 Mini Transat. A good way to get into the depth world of the most unusual sailors.

The pleasure of the taste
It is well known that the French love their food and gastronomy. That is why the Cornouaille Chamber of Commerce and Industry have planned to spice up the Mini Transat îles de Guadeloupe with race village with many culinary events including famous Brittany appetizers and “apéros” both for the public and the skippers.

Finally, there will be so many things that we can’t plan for, and can’t foresee. Whether it is running into someone on the pontoon, the small gestures of solidarity amongst skippers to help someone running late on his/her preparation, the tough early mornings starts after a night of discussions on off-shore racing, the last minute visits that family and friends do before the big start, the exchanges between rookies and the experts… In short, every small detail that makes the spirit of the Mini Transat îles de Guadeloupe a race that everybody knows will be life-changing event.

Today the race village hosted the presentation of the event sponsors. This is what they said:

Bertrand Nardin, President of Douarnenez Courses: “We are very proud to set off again on a new race. We have worked very close with the Mini Class and the sponsors to get the most out of experience gained from the last race and make this 2015 edition a complete success. I think we are all dreaming about the finish in Guadeloupe… I know that without all the volunteers from Douarnenez the event will not be possible. 200 volunteers will come and help to build a succesfull race.”

Philippe Paul, Douarnenez Mayor: “For us this event is like a sound box, an event that aims to settle in Douarnenez. We are going to show that we are able to make it better this year and we will defend our project to get the support of the Mini Class for two more years”.

Jean-Marc Tanguy, Vice-president of Conseil Départemental du Finistère: “This is an event that gathers three of our benchmark pionts we develop, the coastline promotion, an event that is of high sporting calibre actioned unde rthe Label Bleu, an event that brings people together and one we fully support.

Jean-François Garrec, President of Cornouaille Chamber of Commerce: “This race is going to be the best time to show the savoir-faire of the Finistère boat yards such as Structures and Marée Haute who have produced some of the boats competing in the race. This is also the opportunity to build up relationships with Guadaloupe as some of the local companies are working with us on the finish in Pointe-à-Pitre”.

Maxime Sallé, Vice-President of Mini Class: “We are very happy to be part of the race. The Douarnenez Courses team has been working very hard since the last race. This 2015 year of the Mini Transat îles de Guadeloupe is under the best auspices”.

Henri Bacchini, Vice-president of the French Sailing Federation: “Since 1983, when the Mini Transat came back to France, the French Sailing Federation has actively supported the event. Despite some occasional stumbling blocks, the race has contributed to the international reputation of the solo sail races. I would like to remember as well that this is the 10th edition that the race starts in Finistère; that shows the link between the race and the region”.

Marc Hémon, Océan Bio-Actif President: “Explore new fields, taste the adventure and the passion for the sea and the ocean, these are the three cornerstones of our existence. We found these values in the Mini Transat îles de Guadeloupe”.

éric Cintas, France Televisions: “This year we will produce a special programme, the live at the start with France O and Guadeloupe Première and finallly after the race a 52 minutes programme presented by Nicolas Raynaud dedicated to the Mini Transat. We are working already on the arrival and we will announce the programme shortly”.