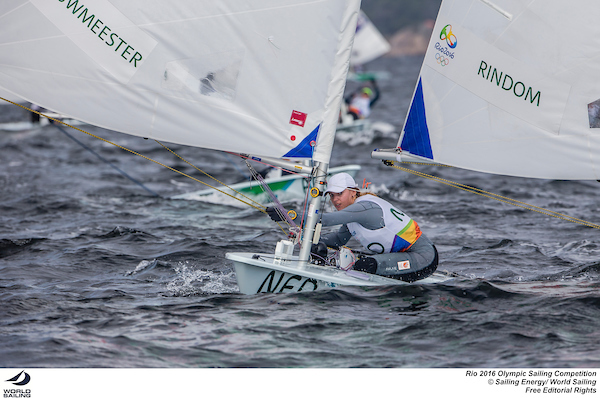 There was major drama in the Laser Radial camp last night when defending Olympic champion Xu Lia (CHN) was disqualified for taking a penalty turn too late. On port tack, Xu had crossed American Paige Railey, who was forced to duck. The Chinese champion took her penalty about 10 seconds later but Railey protested that she could have done it sooner. The jury agreed but some very experienced sailors said it was a tough call.

As all champions do, Xu put the problem behind her and after dropping the 38th place the DSQ caused, she sits on top of the log after a third and a first today.

As is the case in the men's class, every sailor now carries a double-figure score, meaning that another bad race could radically change the placings.

Rindom is the only one of the top five who was not involved in the classic medal race at London which resulted in a win to Xu, Silver to Bouwmeester and Bronze to van Acker. Murphy was the unlucky one who missed a medal and she is obviously determined to make amends here in Rio.

Unfortunately, it was a bad day for Australia's Ashley Stoddart after such a strong and consistent performance yesterday. Today she scored 17 and 28 to sit in 14th place but only four points from the top 10.

Stoddart said the more consistent conditions today meant the shifts were more subtle and there were fewer gains to be made if you found yourself in a bad position.

Asked whether her tactics would change now that she had ground to make up, she replied that she would still concentrate on each race and not think about the overall score.