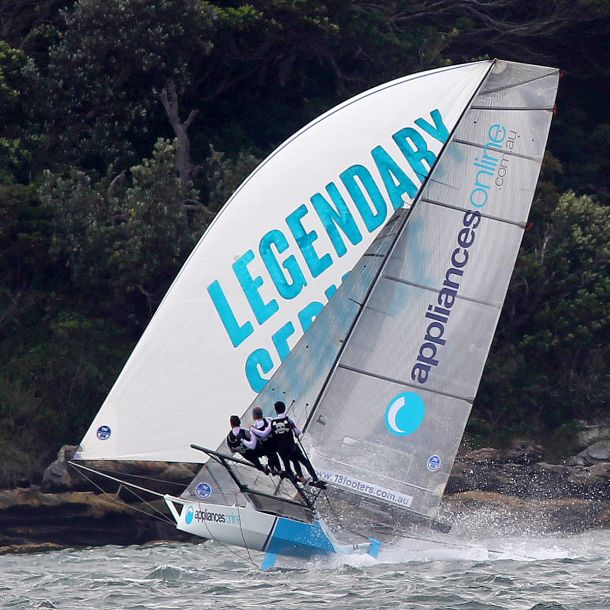 The Thurlow Fisher Lawyers crew of Michael Coxon, Dave O’Connor and Trent Barnabas capitalised on a brilliant start to lead all the way for a convincing victory in Race 10 of the Australian 18 Footers League Club Championship on Sydney Harbour today. After crossing the fleet on port tack at the pin end of the line, Coxon and his team sailed faultlessly to hold off strong challenges from Gotta Love It 7 and Coopers 62-Rag & Famish Hotel.

With just one more race to be sailed in the championship, Coopers 62-Rag & Famish Hotel holds a 14 points lead over Gotta Love It 7 and only a non-finish could possibly cost the team a well deserved title.

Thurlow’s great start enabled the team to take a 15s. lead at the windward mark from The Rag and Compassmarkets, which were locked together ahead of Gotta Love It 7 and Asko Appliances (James Dorron).

The fleet elected to sail 2-sail reach for most of the long run from Clarke Island to Obelisk Bay and the lead didn’t change, although Gotta Love It 7 had moved into third place ahead of Compassmarkets.

On the following windward leg back to Rose Bay there was a vast difference of opinion by the leaders. Michael Coxon elected to sail west of Shark Island while Adam Beashel and Jack Macartney sailed the more traditional course east of the island. When the two groups met at the southern end of Shark Island Coxon’s move had proved a winner as Thurlow Fisher Lawyers led by 10s. from Gotta Love It 7.

Even though placings didn’t change much over the course, the racing was extremely close and the spectator fleet was entertained by some exciting racing duels.

Race 11 of the Club Championship will be sailed next Sunday. It will be the final race of the Sydney season. The club’s regular ferry will follow the race, leaving Double Bay Wharf at 2.15pm.