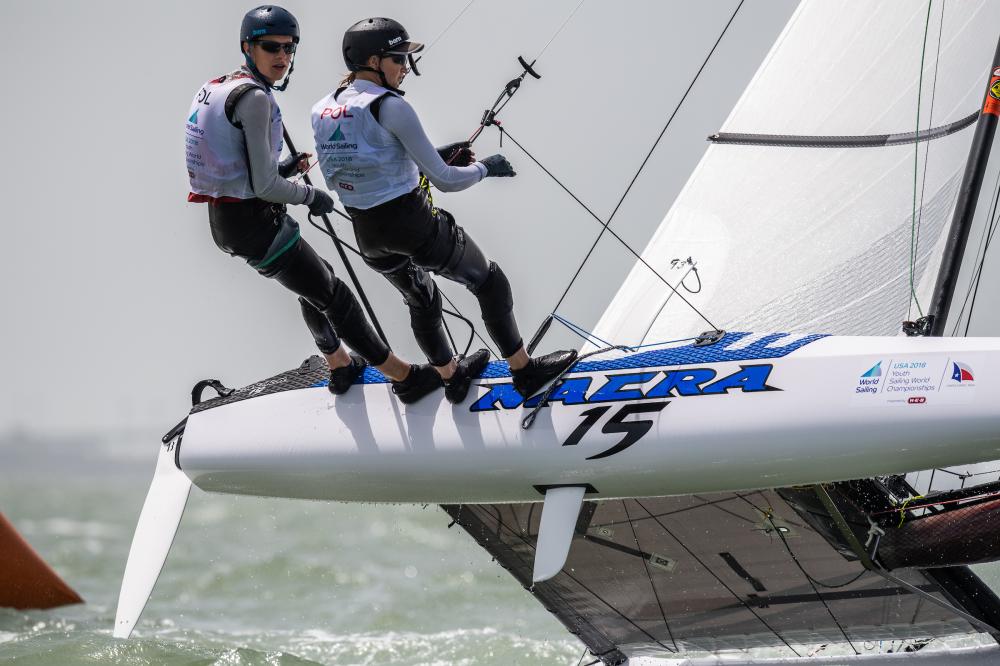 Poland’s sailing capital, Gdynia, will come alive with the sights and sounds of the world’s best young sailors when the 2019 Hempel Youth Sailing World Championships commences on 13 July.

409 sailors from 66 nations will race across nine youth events including the Boy’s and Girl’s divisions of the 29er, 420, RS:X and Laser Radial as well as the Mixed Multihull, the Nacra 15.

A young Polish team will race in every class at the Hempel Youth Worlds and of the 14-person team, only Oskar Niemira has previous experience of racing at the pinnacle event for young sailors.

Niemira sailed the Nacra 15 at the 2016 and 2017 editions in Auckland, New Zealand and Sanya, China, placing 11th and ninth respectively. For 2019, he is racing on home waters with younger sister, Maja.

Oskar, 17, and Maja, 15, reside in Gdansk, just 34km down the coast from Gdynia so will feel at home and at ease with their environment. They will no doubt be targeting a podium finish.

However, there is a clear favourite in the 21-boat Mixed Nacra 15 fleet before the first warning signal has been made.

Dante Cittadini of Argentina controlled the Nacra 15 fleet in 2018, winning gold at the Youth Worlds in Corpus Christi, USA and at the 2018 Youth Olympic Games in his home city of Buenos Aires. Cittadini raced with Teresa Romairone in 2018 as they clinched double gold, but he’ll be joined by Maylen Muscia in Gdynia. Muscia is making her Youth Worlds debut but with Cittadini’s previous experience, gold will be the target.

Italy’s Andrea Spagnolli and Giulia Fava finished 36 points off the Argentineans at the 2018 Youth Worlds to seal silver. Spagnolli returns to the 2019 edition with Alice Cialfi.

The Polish team will have high hopes for a medal in the Boy’s 420 after recent success. Patrik Kosmalski and Tomasz Lewandowski (POL) won gold at Kieler-Woche in a 62-boat Open 420 fleet. On their way to victory, the pair won four of eight races and confidence will be high as a result.

The 420 World Championships are currently ongoing in Vilamoura, Portugal and New Zealand’s Seb Menzies and Blake McGlashan have sailed superbly, leading from day one. They will be focused on maintaining that consistency through to the close of the Championship before turning attention to the Hempel Youth Worlds.

Thirty boats will line up in the Boy’s 420 fleet and there will be new medallists with no returning 2018 podium finishers.

The Girl’s 420 fleet will be comprised of 24 eager teams. Carmen and Emma Cowles (USA) won back-to-back Youth Worlds in 2017 and 2018 but having aged out are no longer eligible to sail. A new name will be engraved on the famous RYA Trophy.

Returnees from the top ten from the 2018 edition include Brazil’s Marina da Fonte and Marina Arndt, Germany’s Theresa Stenlein and Lina Plettner and Croatia’s Antonia Kustera and Maris Basic.

After winning silver at the 2017 Youth Worlds, Norway’s Mathias Berthet and Alexander Franks-Penty went one better last year. A dramatic finale saw them finish level on points with the New Zealand team, but their four race wins over the course of the week meant they won the tiebreaker and clinched gold. The Norwegian duo will be eyeing another podium finish in 2019.

Seb Lardies and Scott McKenzie (NZL) missed out by the narrowest of margins to the Norwegians and it will be up to their compatriots Elijah Liefting and Nicholas Frewin to avenge their defeat.

Notable returnees in the Boy’s 29er fleet include Ewan Wilson and Finley Armstrong (GBR) and Finland’s Ville Korhonen and Edvard Bremer, who finished eighth and ninth.

In the Girls 29er, seven top-five race finishes last year was enough to earn Berta Puig & Isabella Casaretto the silver medal on home waters. They will be one of the stronger teams in the fleet in 2019.

The official arrival day for the sailors will be Saturday 13 July, where they will collect their equipment from Ovington Boats (29er), Nautivela (420), Laser Performance / Maclaren (Laser Radial) and Nacra Sailing (Nacra 15). The RS:X racers are all bringing their own equipment for 2019.

The Opening Ceremony on Sunday 14 July will officially welcome the sailors to the city before racing commences on Monday 15 July. A single race on Friday 19 July will bring the 2019 edition of the Hempel Youth Sailing World Championships to a close.