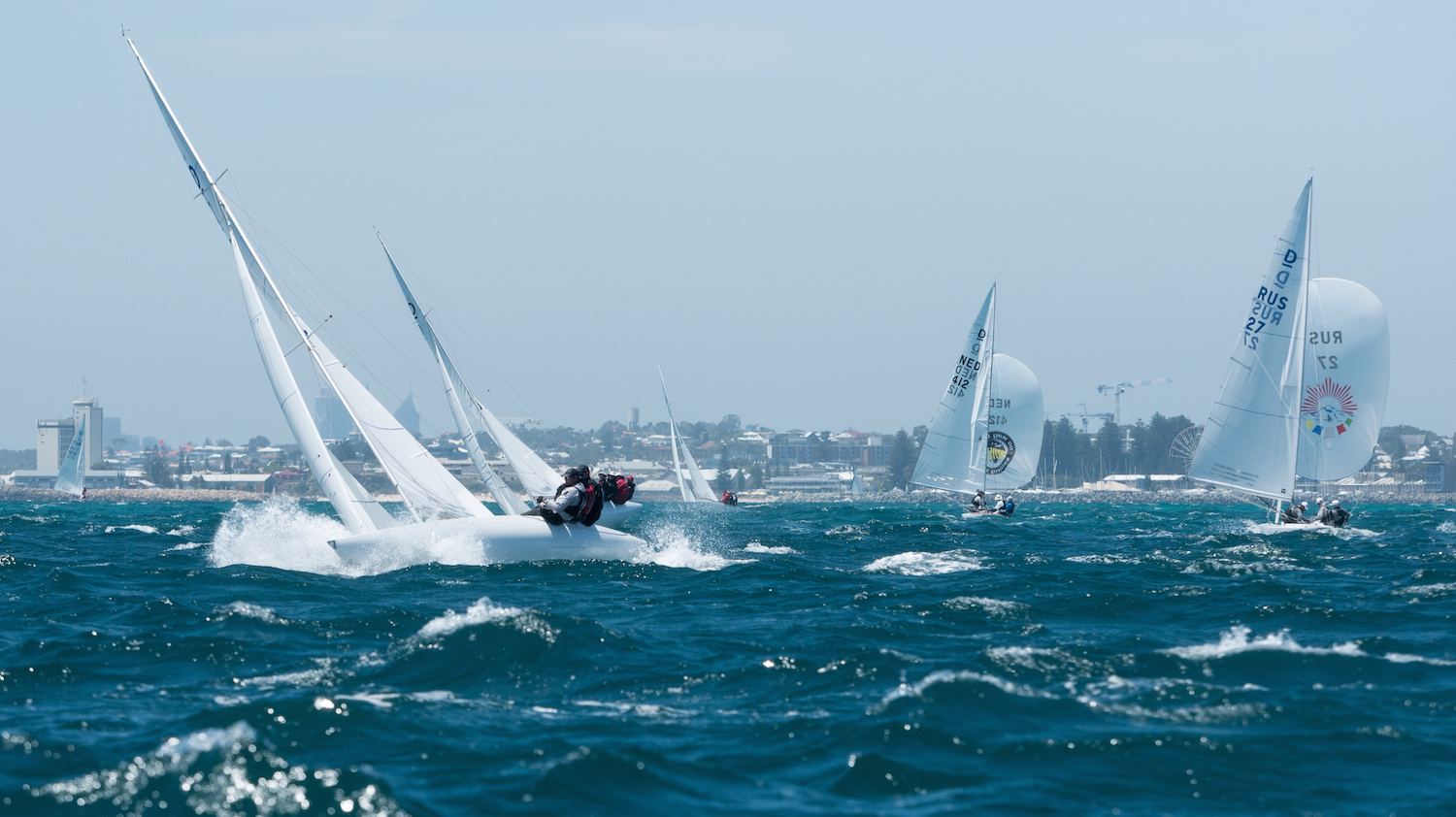 By the end of the fourth day of the 2019 Dragon World Championship at Fremantle, Western Australia, the top of the leaderboard is log jammed with only three races to go.

Despite an early strong wind warning, today’s two races were held in more glamorous sailing conditions. The sun was out all day and the afternoon breeze stuck around 210 – 220 degrees at a moderate 10 – 15 knots.

Race 6 started on schedule just after noon with three boats caught out by the U flag. Ironically these included the two lead Dragons overall, the current world champions Team Provezza and Louise Racing skippered by Grand Gordon.

This created an opportunity for the chasing pack to close the points right up. After just over 29 minutes of upwind racing, Pieter Heerema and his team of Lars

Hendriksen and George Leonchuck led the fleet on the first lap from Klaus Diederichs racing Fever and Dmitry Samokhin and crew on Rocknrolla. The entire fleet of 30 Dragons rounded in just under 3 minutes.

The fleet split evenly on both sides of the track preferring to opt for the inshore gate at the bottom of the course. The shorter upwind leg again caused the fleet to split but at the top end it was still NED412, AAA steered by Pieter Heerema with a clear advantage over Klaus Diederichs in GBR819 and Anatoly Loginov in Annapurna who moved up to third. These places remained the same to the finish. Willy Packer and his Scoundrel crew had finally recovered his mojo to cross fourth and the happy Dutch team onboard Olinghi closing out fifth.

Another quick reset to a course axis of 205 degrees and race 7 got started at 1400 hrs using the longer course 1 option. Again under U flag this one was close but clear. Both TUR1212 Andy Beadsworth and GBR820 Louise Racing seemed to get away well at the committee boat end. However first around lap one was JPN56, Yanmar Racing skippered by Peter Gilmour and crew Sam Gilmour and Yasuhiro Yaji, closely tracked by the ‘Flying Scotsman’ Grand Gordon and the first of the Russian boats RUS27 Annapurna in third.

At the bottom gate the two leaders rounded separate gate marks simultaneously. Pieter Heerema, Klaus Diederichs, Andy Beadsworth and the Olinghi girls were all in a close pack behind. On the second upwind leg Grant Gordon’s Louise Racing Team managed to snatch the lead and open out a 47 second gap on the second run. The Japanese Yanmar Racing Team held onto second leaving Anatoly’s crew Vadim Statsenko and Alexander Shalagin in third. With the wind pressure varying up and down from 10 – 15 knots, all Grand Gordon needed to do was cover his opponents to the finish line to claim his second win of the championship but more importantly close the overall lead to 1 point. Peter Gilmour’s second kept his

Yanmar Team right in the mix in 4th, just three points off the leader. With a set of very consistent top five results and a discard of 7, Klaus Diederichs and his crew of Jamie Lea and Diego Negri moved into third overall.

Jamie Lea sums up the day for the British Fever team: “We had a good battle with Pieter Heerema and were second in the first race of the day. For the second we started a bit further down the line than most people and got caught out in a bit of light pressure on the left so we were about 8th at the top mark but managed to pull back to 5th. We just dropped a point to Pieter Heerema on the line but at the end of the day a 2 and a five is good for us. We have done a lot of training for this event this summer with our team mates Louise Racing in Lake Garda and it seems to have paid off really nicely”

So with the only discard coming into play the top six boats are separated by only 6 points with three races to sail. Tuesday is the penultimate day of racing with two more races planned and an earliest start time of 1200 noon.

Special performances highlighted today include a superb result for local Perth sailor  Sandy Anderson and her crew, John Moncrieff, Harry Coulson and Caroline Gibson who recored a 16th in race 7. Also singled out was Ray Chatfield’s Wizzardry team, including his wife Karen and 76 year old Peter Massee. To their surprise the local RFBYC crew rounded the top mark in 4th and ground out an 11th by the finish.

After racing the daily presentations are a social occasion when the gongs and the ‘Spirit of Dragon Awards’ (SODA Awards) are dished out. This is when the bottles of Glenfiddich Scotch are awarded. This was followed by a Q&A with four of the top international skippers with the WA sailing guru Peter Gilmour acting as MC. The session was warmly received especially as so many of the fleet racing at this championship fall into the Corinthian category.