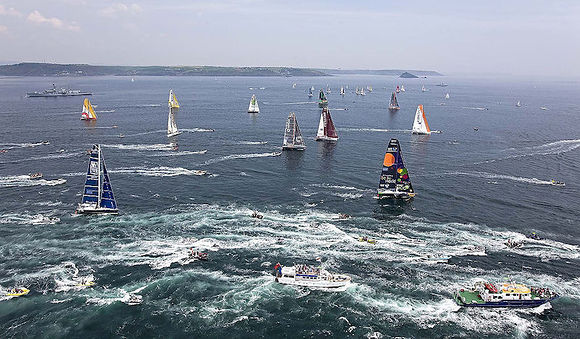 The historic sea-faring City of Plymouth (UK), known as Britain’s Ocean City, has won the bid to host the start of the next edition of The Transat in 2016, ensuring that The Transat, the successor for professional sailors to the original solo race across the North Atlantic that was born as the OSTAR in 1960, will start from its historic ‘home’ of Plymouth on Sunday, 8th May 2016.

OC Sport, as rights-holders of The Transat, organised the races in 2004 and 2008. Hervé Favre, Offshore Sailing Events Director of OC Sport said: “We were delighted to receive several good bids to host the start of the Transat in 2016. The Plymouth City Council bid was extremely strong and we’re very much looking forward to working with Plymouth again. We are especially pleased that not only will Plymouth ensure the infrastructure and support required to host a race of this stature will be in place, but that they are also committed to ensuring this race is an event for the people of Plymouth and its visitors.”

The 14th edition of this historic quadrennial solo transatlantic race began its life in 1960 and has transformed into one of the most important events on the professional racing calendar. The race not only attracts many of the world’s leading solo sailors but will also showcase the latest and most innovative ocean racing machines on the planet.

The 2008 winner and monohull record holder, French sailing legend Loick Peyron commented: “Aptly named ‘The Transat’, I have had the chance to line up five times for this legendary adventure, and won three times. So you can understand why this is my favourite race! I love its course, its history and now its future.”

Councillor Peter Smith, Deputy Leader of Plymouth City Council, said: “We’re over the moon that OC Sport has selected Plymouth as the host venue for The Transat in 2016. Businesses in the city have rallied to support our bid and we’re looking forward to staging a spectacular and memorable event in the race’s historic home.”

“We’ll be working to create a real regatta feel for the event and enlivening the Hoe, Barbican and Sutton Harbour with music, entertainment and much more for sailing enthusiasts, families and visitors to enjoy.”

The 2,800-mile race across the North Atlantic is renowned for wild storms and tough upwind conditions, icebergs and freezing fog in the final part, and can take between 8-19 days for all the boats to finish. Sir Robin Knox-Johnston, the first person to sail solo, non-stop around the world between 1968-1969 commented: “It is very good news to see this race continuing its long tradition as the most challenging of the solo transatlantic races.”

Racing classes invited to take part in The Transat 2016 edition include the Class 40 monohulls (40ft) and Multi 50 multihulls (50ft), that will line up on the start line alongside the ocean’s monohull greats – the IMOCA 60 Class (60ft), the world’s leading solo class that go on to contest the solo Vendée Globe non-stop around world race, and the breathtaking Ultimes multihulls measuring anything from 51ft-105ft. [NB: the official Notice of Race for competitors will be published in the near future].

The North American city hosting the finish will be confirmed in the coming months.