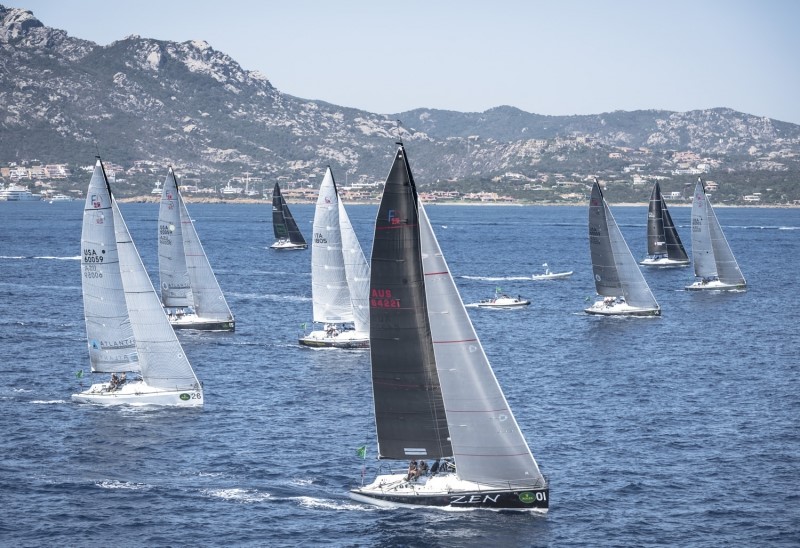 Porto Cervo, Italy: At the 20th edition of the Rolex Farr 40 World Championship, organized by the Yacht Club Costa Smeralda with Title sponsor Rolex and the Farr 40 Class Association, four races were run today in north-westerly breezes that built gradually from 6 to 12 knots from 11:00am when racing started, to the late afternoon of a long day.

Quantum Sails Race Day produced hard fought racing in a tightly packed fleet as so often happens in the Farr 40 One Design fleet. There were several changes in the top positions in the four races run today with almost all of the top placed teams having a day of mixed results.

Zen (Ketelbey/Chapman), Flash Gordon (Jahn/Reeser) and Plenty (Roepers/Hutchinson) all placed first at least once today, but at the end of the day it was Plenty, with two first and two second place finishes, that moved to the front of the provisional results with a comfortable distance over the second and third placed teams.

The defending champions may well hang on to their title, but only tomorrow's results will tell. Things look more uncertain in the Corinthian fleet, where the Australian team aboard Zen, in fifth place overall, is currently in first place amongst the Corinthians by just one point.

Close behind her are MP30+10 (Pierdomenico/Regolo) and Pazza Idea (Bresciani/Ivaldi) currently tied for points in second place. This later team sees twenty-four-year-old Claudia Rossi, daughter of Alberto, owner/helmsman of Enfant Terrible, at the helm.

Tonight all the teams will reunite on the Yacht Club Costa Smeralda's terrace for the traditional barbecue dinner.

Alex Roepers, owner/helmsman aboard Plenty: “It was a phenomenal day considering the consistent performance by the team Plenty. We chipped away four races in a row placing 2, 1, 2, 1 so I'm very happy with our consistency.

“The conditions were pretty good, not too light. We saw wind speeds as low as 6 knots and up to 12/13 but usually it was around 8 to 11 knots. Great job done by Terry Hutchinson and the whole crew. Tomorrow is another day, we'll go out expecting a normal day and see how it goes”.

Helmut Jahn, owner/helmsman aboard Flash Gordon: “We got better and better today, placing first and second in the last two races. Unfortunately, we slipped back two boats in the second race and placed fifth when we could have been third, but then we improved.

“All we can do is be a little better tomorrow and keep our current standing or better. Every win is a great result and that's the great thing about One Design racing in this sport: if you cross the line first you're the best and there's no discussion. Porto Cervo is the best place you could be for these races, even better than Chicago.”

Gordon Ketelbey owner/helmsman aboard Zen: “It was superb to win a race today and we're really excited about that. Unfortunately, we got a penalty and had to some turns in the race after that, so ended up at the back but in the end it's OK. It was a good day of racing, wonderful, wonderful conditions, nice flat water and consistent 12 knots wind.

“’ve been to Porto Cervo twice before cruising and I'm really enjoying racing here for the first time. It's a wonderful place to race for the conditions, wind offshore, flat seas…Unless you get the Mistral and you just have to live with that. As the top placed Corinthian team we have to make sure we keep our lead. So everyone to bed early tonight and no drinking.”

Tomorrow, Sunday July 16th is the final day of racing at the Rolex Farr 40 World Championship. Racing should get underway at 11:00 AM in breezes from the north, north west that could be at up to 20 knots. Principal Race Officer Peter Reggio could run up to four races.