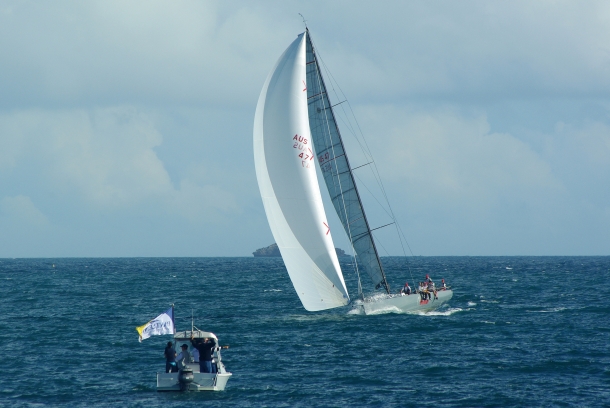 Indian on their way to the finish in race one of the 2015 WA IRC State Championship. Photo Perth Sailing Photography.

Saturday morning, sailors woke to ideal conditions for racing offshore in race one of the Pantaenius Australia 2015 WA IRC State Championship, the Arlene Race. A steady 15-20 knot WNW breeze with a moderate swell and gustier conditions out to sea, treated the fleet with some challenges over the 28nm passage course in Fremantle waters.

First off the line were the Double Handers, followed by Division Three. Conditions in the starting area were lumpy which created an interesting sight as boats partially vanished for a moment in the troughs. Next in line were the 12 Division Two yachts, with half of those in the IRC competition. Event photographer, Rick Steuart was on the Pantaenius support boat and labelled the start a riot. The boat end was crowded and Race Officer Trevor Milton was ready to defend his team with boat hook in hand. Thankfully they all squeezed through and got off to a clean start with This Way Up having to make a quick tack away to clear her air.

On-board Joss, the strategy was not to be too aggressive at the start, the team planned to come in fast near the boat end of the line, find a nice gap, and get going in clear air. With the Division Two yachts sailing close together all the way out to Fairway buoy, keeping the boat low and fast and moving in the lumpy conditions was a key factor in getting out in front. Patrick Clyne from Joss told their story after the race, “Our team managed to do this well and finished the windward leg in a very good position. After an excellent hoist, our excitement was short lived when the tack line of our big green asymmetric kite snapped, sending the crew scrambling to quickly drop the kite and attach it directly to the bow sprit. After the fix it was hoisted again quicker than Usain Bolt ran the 100 meter sprint at the last Olympics. We made good gains downwind, ensuring that we were at the front of the fleet following close behind Giddy Up & Just Cruising.”

The team set their sights on the boat ahead, passed Just Cruising, then focused on Giddy Up, not quite catching them on the final leg but they got close and finished just three minutes behind. Giddy Up secured the win in race one on IRC corrected time by 23 seconds and collected some brilliant silverware at the prize giving.

After much pre-event anticipation about the Division One battle between Indian and Calm, the teams will be glad to have race one out of the way. The TP52, stretched out from the Carkeek 47, Calm finishing 10 minutes ahead of Indian. Skipper of Calm, Andrew Harry commented, “We are pleased to have a similar boat out on the water to race against and keep us honest. My guys sailed a good first beat and we were about 5 minutes ahead when we got to Fairway buoy. The wind was good and the rain squalls brought more breeze, up to around 25 knots and that made for some fun on the downwind legs.”

These two impressive yachts will be keeping an eye on defending champions, The Next Factor, she came in third over the line and placed second on corrected time, only 21 seconds behind Calm.

At the race one prize giving, the division winners came forward to collect their impressive trophy from Pantaenius WA BDM, Manfred Speicher. In the Double Handed class, Matt Dickmann from Fifty Four had a convincing win ahead of Peter Henley’s Cutty Wren. It was a much closer contest in Division Three with Laurie Flynn from Dynamic finishing only marginally ahead of Alison Stock’s Selkie to claim the prize.

Yachts will now wait until the 4th of July when they will contest race two, the Ensign Race which is another passage race followed by a windward-leeward series on the 5th of July. The Pantaenius boat will be out on the water again in support of the fleet, looking forward to the next contest.