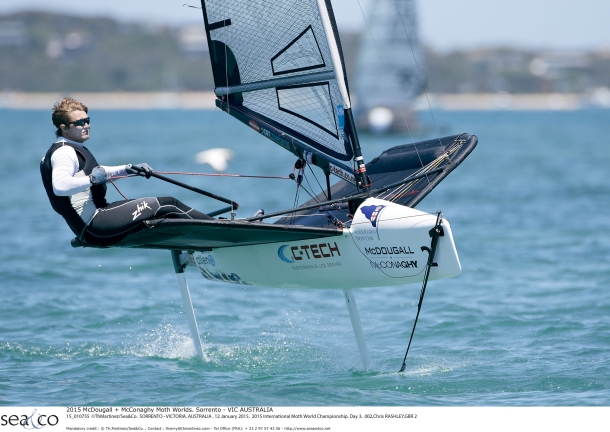 Tomorrow sees the UK foiling Moth community descend on Stokes Bay Sailing Club for the International Moth National Championship. To date, 57 helms have entered and more are expected to enter on arrival.

Defending champion Mike Lennon said, “It will be a tough four days defending the title. Many more boats are fast this year and the general standard in the fleet continues to improve. Chris (Rashley) will be the man to watch if it's 'Mork and Mindy' (windy to those not conversant in cockney rhyming slang). Dylan (Fletcher) has a new boat and has looked very fast in training, plus many others are strong this year. A good contingent of foreign boats may also throw up some unexpected results. It's shaping up to be another classic Moth event.”

As Mike mentioned, home club sailor Chris Rashley must be favourite going into the event having finished as top Brit in the last two World Championships (4th in Sorrento 2015 and 2nd at Hayling Island in 2014). Chris said, “I have been delivering the results in the UK and Europe so far this year, with the Nationals at my home club It would mean a lot to me and the club if I can take the win.”

Other names to watch include Jason Belben, who won the nationals at Stokes Bay in 2011 and Ben Paton, otherwise known as 'The Patonator', who finished 5th in the 2014 worlds and 4th in the 2013 worlds in Hawaii.

Stokes Bay was described by Rob Greenhalgh as “a fantastic place to sail a Moth, and in recent seasons it has been breeding world class Moth sailors”. Forecasts are currently predicting 10-12 knot winds on the opening two days, increasing over the weekend – perfect foiling conditions.

– by Mark Jardine for IMCAUK