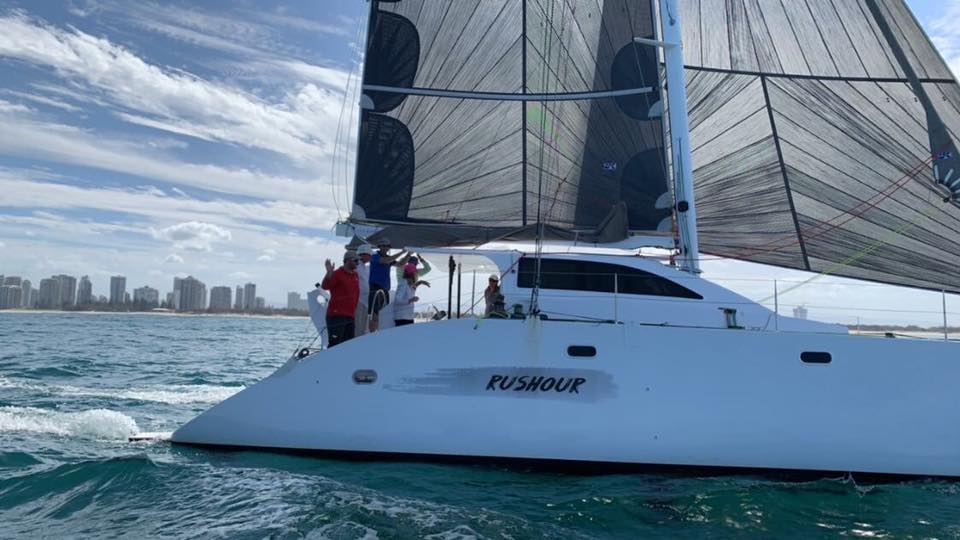 An elated Carruthers commented: “Whilst there can be up to 15 people crammed into a small monohull, on our multihull it’s very comfortable and goes a relatively similar speed to the monohulls.

“We were very lucky. When Morticia unfortunately had to pull out, we backed off a little, with our only goal being to make sure that we were the first boat home, which we obviously achieved. Once we got past the first night. We had beautiful sailing; it wasn’t too rough just a little light on the wind at times.

“It was disappointing to lose our fellow multihulls, but that’s one of the risks in the sport. The next race for the boat will be Brisbane to Gladstone.”

Hudson had this to say post-race: “I thoroughly enjoyed the race. The toughest bit was getting around Cape Byron; that was physiologically challenging. Our crew morale was excellent; we had a lot of fun, a good mixture of youth and experience.

“This was Pretty Woman’s first line honours win outside a club race, so we are very pleased with that.

“Highly Sprung was always close behind. It felt like they were attached on a piece of shock cord. What we did appreciate was that we led from the starting gun, we got out of the start nicely, and never let anyone in front of us.”

Michael Lockley – RPAYC Club Commodore said, “All of the Youth Development members on the boat were fantastic.

“A positive side of the Pittwater to Paradise Race is that it gives the opportunity for everyone to go racing whether it is north or south, with a different set of time restraints.

“It’s also ideal for those who are not yet up to a Hobart Race, or would like to use this as a stepping stone to the Hobart. It gives them an entrée into how a long ocean race might work and how you prepare and deal with it, how to put a crew together and who you need.

“The Race has been a success. Unfortunately we have had a few retirements. The good news is that people were able to make decisions and get some safe outcomes if things didn’t quite go right.”

Second over the line in the monohulls and provisional winner of IRC, ORCi and PHS, is Mark Spring’s Beneteau 45, Highly Sprung. She followed Pretty Woman over the line only 14 minutes later at 17:11 AEDT, enjoying a very close battle.

“The first night was pretty rough for the new guys on the boat. It was definitely an initiation for them, then pretty much champagne sailing after that.

“Four of us are very new to the sport of racing, having sailed for a long time but never raced offshore, but we have some amazing professionals on board too, with at least six very seasoned sailors,” Spring said.

“We had a ball – having Pretty Woman just ahead of us was a great motivation – we’d look up and they’d be there. They got away from us on the second day, so overnight the team worked really hard just pushing every second of it, and we caught her. It was a great race and we look forward to having a drink and chat with them.”

At the time of writing, four boats were still racing with the next boat due this morning (Sunday).

Four days of racing will be staged on the beautiful ocean waters off the Gold Coast’s golden beaches from Sunday 6 to Wednesday 9 January 2019. Both events have been combined to create an offshore series for competitors and the ultimate winner of the ‘Pittwater to Paradise Regatta’.