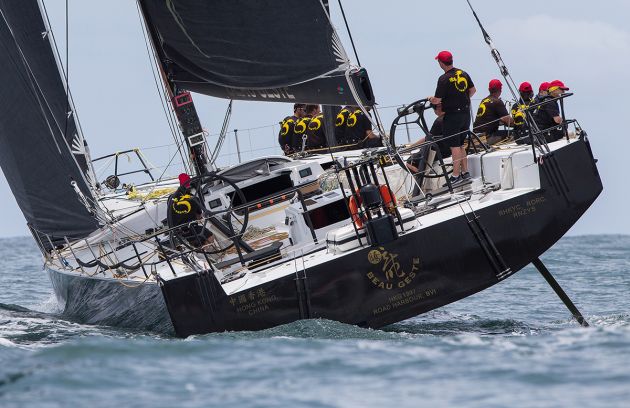 A straightforward final night at sea for the Club Marine Pittwater to Coffs Yacht Race fleet brought the last boat, Out of Sight, from 42 starters to the finish line at 0632hours this morning, Monday January 4, 2016.

All boats are safely tied up at Coffs Harbour marina on the NSW Mid North Coast or heading for home ports and the final placegetters have been declared. What was touted a promising smaller boat race for handicap turned out to be a big boat run north, at least for the major IRC trophy.

“Getting the record is something on our minds, but with the line honours and IRC overall win we achieved full marks,” Kwok said today. “Taking IRC overall is definitely an unexpected bonus! For all those who participated in this great race, they must be diehards like me! It was so nice to have big fleet for this event.”

Second IRC overall, first in IRC division 2 and first on ORCi handicap went to Adrian Van Bellen’s J/122 Jackpot from the Cruising Yacht Club of Australia. “It’s unbelievable; the conditions were perfect for us,” said the first time Coffs race owner/skipper. “I cannot speak highly enough of the crew; the credit should go to them. They are an inspiration to me.”

It’s been a steep learning curve for Van Bellen given he bought his first boat, a Compass 28, less than eight years ago.

Jackpot’s navigator Carl Crafoord said they competed without all the usual Rolex Sydney Hobart aids like MetEye and weather routing, instead “looking at the sky and sailing by seat of our pants… like back in the 80s. It was fun!”

Dockside Sykes recounted a very random mid-race attack. “We went through a school of squid… we had 4 or 5 jump on the boat flicking around. I was standing up and one hit me in the back; I thought it was one of the guys winding me up. It was pretty funny…a first that’s for sure!”

“We had a great ride with big smiles all around and we are thrilled with the result,” said Grimes. “I am very happy for the crew and would like to thank the organising committee at RPAYC and the Coffs Harbour Yacht Club.”

Video of the start on Saturday January 2 at 1pm from Broken Bay https://youtu.be/0z54yHqa930

Full handicap results in all divisions at http://www.pittwatertocoffs.com.au/live/race-results

This evening two members from each crew will attend a Mayoral reception at Coffs Harbour Yacht Club prior to the end of race trophy presentation at approximately 1700hrs. All crews are welcome to attend the prizegiving.

Tomorrow is the pursuit style Club Marine Solitary Island race kicking off with the race briefing at 1030hrs at CHYC where starting handicaps will be issued. The fleet of 17 will start and finish in the harbour from midday onwards and the BOM has issued a strong wind warning, which should make for a fast, fun race. The fleet can be tracked here http://www.pittwatertocoffs.com.au/live/solitary-island-tracker