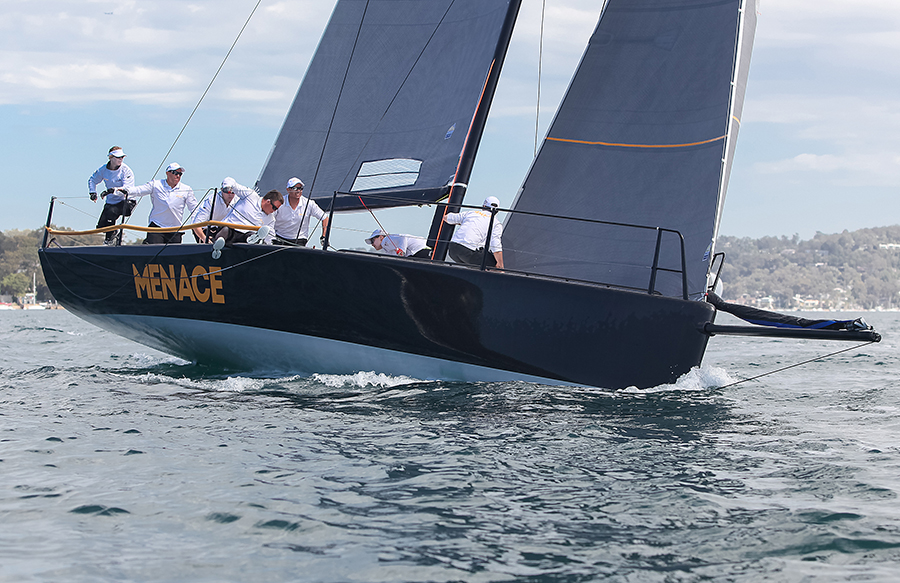 Pittwater served up its usual antipasto plate of varying wind strength and direction on day one of the MC38 Spring Regatta, the penultimate event of the 2015 Australian season championship.

In light and shifty nor’easters the combination of tactician David Chapman, Colin Beashel on mainsheet and North Sail’s Richie Allanson on jib and kite trim, combined with the usual high standard of crew work befitting the current Australian champions, drove Leslie Green’s Ginger to the series lead by one point after four races.

“The new combination is a nice starting platform, but we have a lot of work to do before the nationals in February on Lake Macquarie,” said Chapman. “We are trialling different crew configurations as we prepare to defend our title and attempt a trifecta.”

Conditions-wise a weary Chapman added, “Today wasn’t great. It was a long day in the sun with nowhere to hide.” He flew in this morning from Los Angles and an extended overseas circuit of mostly Farr 40 racing and leaves Monday for New York and another sailing gig.

Lighter winds slowed everything down and there was less argy bargy than usual on the start line just off the north side of Scotland Island, and at the mark roundings. The two on-water umpires spent an easy day trailing the fleet around the track with whistle and flag at the ready. Only one whistle sounded, for an incident between Hooligan and Assassin at the finish in the last race of the day.

John Bacon’s Dark Star in third overall had first pick of the best-tasting olives on the platter in race three, scoring the bullet easily then sucked on the bitter pips in race four when the long-time and talented Royal Prince Alfred Yacht Club team sailed into a hole on the upwind leg and finished last.

Fourth overall this evening, Saturday October 10, 2015, and delighted after one of their best days since joining the MC38 fleet, was Robin Crawford’s Assassin crew sailing for the Cruising Yacht Club of Australia. Daughter Clare, who is helming her second only one design regatta said, “Dad will be so pleased; we are continuing to improve.”

Tactician Evan Walker and mainsheet Sean O’Rourke have been pushing the Assassin team to mix up the crew roles and study every component of every manoeuvre. “It’s really nerdy stuff; we are writing everything down and getting more analytical,” said the class’ only female skipper back at the host RPAYC after racing.

Walker chimed in, “It’s taken us time to sail the boat well enough that we can settle in and work on the rig and some other settings, and develop a guide. Today we weren’t going blindingly fast but we weren’t slow either. We kept up.” He says the job of tactician on an MC38 is hard going, “There were times today that with another metre’s distance we could have made the cross, instead we ended up sandwiched and well back. That’s how tight the fleet is.”

On Crawford’s move to the helming role Walker reckons she’s shown a lot of promise. “Clare’s challenge is the stress level when we get near other boats; she just needs more race practice.”

Racing is due to start at midday tomorrow, Sunday October 11, and the forecast is for north to north-easterly winds 10 knots increasing to 10-15 knots in the morning then becoming variable in the early afternoon. PRO Steve Merrington is aiming for three more races to complete the schedule on the Northern Beaches waterway.