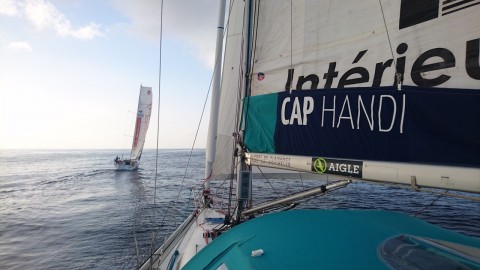 To you, to me… It’s hard to know who’s got the ball in their court in the extremely variable conditions currently dominating play in the Atlantic. The wind seems to have picked up again to the south-east pretty generally. The group positioned furthest over to the east that has been heavily penalised over the past twenty-four hours is looking a tad healthier this Tuesday evening. However, for much of the fleet, there is still a way to go before they can finally make landfall.

This first leg of the Mini-Transat La Boulangère will certainly be etched on the sailors’ minds. Now embroiled in a snail-pace race to the promised land, the solo sailors are finding it hard to know what strategy to adopt given how much the rankings are fluctuating from one position report to the next.

This is particularly true amongst the production boat category, where the leaders are bunched together within a handful of miles. This morning, the trio furthest west made up of Rémi Aubrun (Alternative Sailing – Constructions du Belon), Erwan le Draoulec (Emile Henry) and Benoît Sineau (Cachaça 2) was leading the slog to the finish. However, since midway through the afternoon, the group favouring the east appear to be benefiting from a better angle in relation to the wind to make Las Palmas. Valentin Gautier (Shaman – Banque du Léman) has snatched pole position, with others also likely to reap the dividends, including Clarisse Crémer (TBS), back in sixth position and credited with the top speed of the production boat fleet.

In such shifty conditions, it would seem that the best strategy is to stick to your guns in the hope that your initial options will ultimately pay off. Traversing the race zone is the best way to be completely out of step with the capricious breeze… and yet temptation is a powerful force.

In the prototype category, the battle is also set to rage between Arthur Léopold-Léger (Antal XPO) and Ian Lipinski (Griffon.fr), the latter a tad faster than his adversary. Is this slight difference in speed enough to make up the deficit of nearly 18 miles between the two competitors?

As a general rule, Arthur’s lead should be enough to be confident of taking the crown. However, in light of the conditions offshore of the African coast, it’s still all to play for. Indeed, it’s nigh on impossible to predict for whom or when victory will be sealed, though it would seem reasonable to gamble on a mid-morning showdown.

Not so sweet Madeira

For those skippers still sailing offshore of Madeira, the big question is more about whether they’ll make the finish before their nearest and dearest have had to jump on a plane back home. There are still 300 miles to go for Martin Callebaut (Extasea), Andreas Deubel (www.andreasdeubel.com), Marc Miro Rubio (Alfin) and friends. In normal trade wind conditions, it could be a done deal in 48 hours. For now though, they’ll just have to sit pretty until the wind kicks back in. Once again, the Mini-Transat is certainly earning its nickname of the ‘longest of transatlantics’.