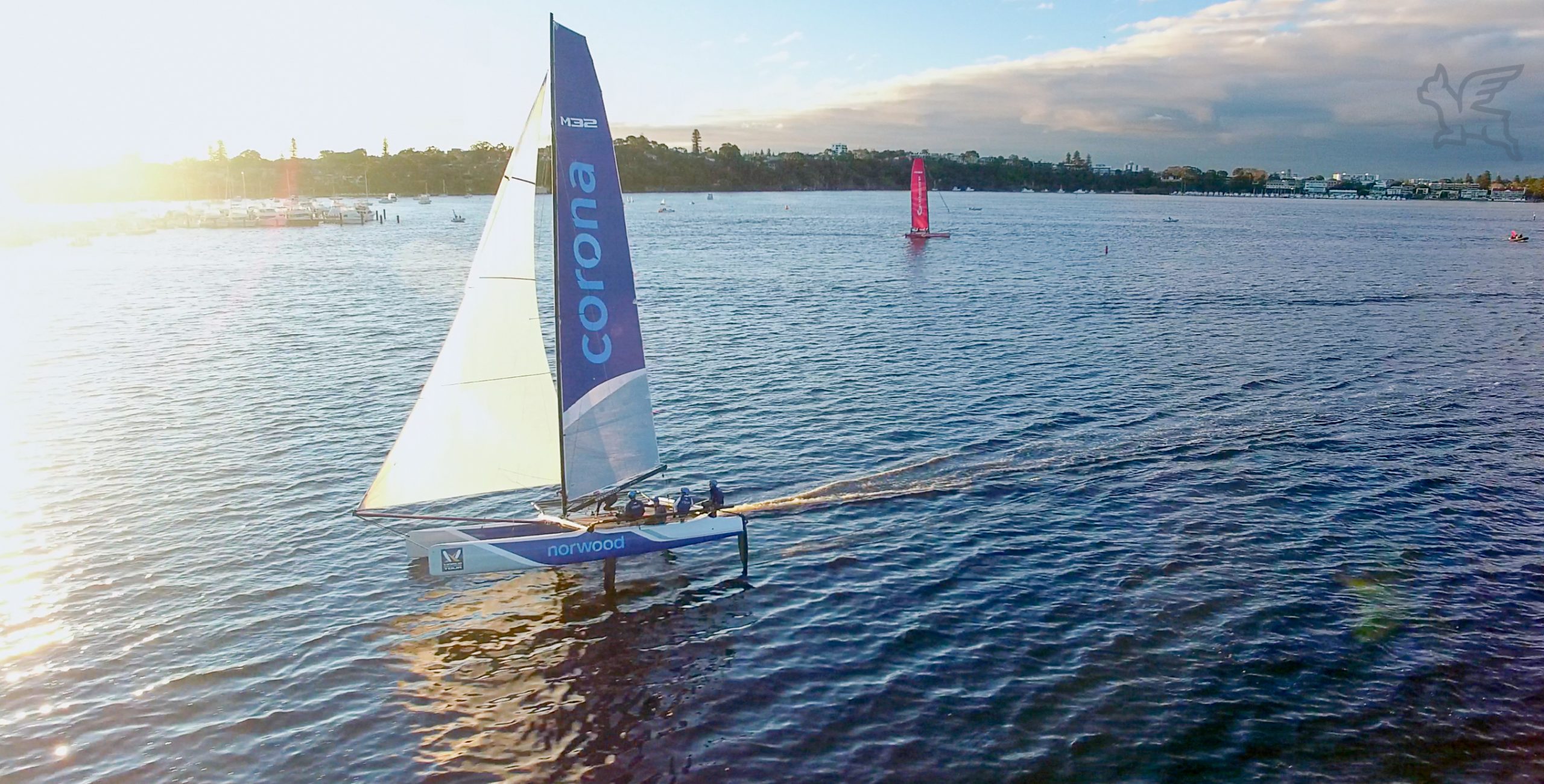 A group initiative between M32 Australia and four sailing clubs in Perth, each of the boats represented a local Club, Royal Freshwater Bay Yacht Club (RFBYC), Royal Perth Yacht Club (RPYC), South of Perth Yacht Club (SoPYC) and Fremantle Sailing Club (FSC). Sailors from a variety of backgrounds both young and old raced alongside each other. It was great to see well known match racing sailors working together with Etchells, dinghy, keelboat and even a few multihull crews. It showed that the M32 is easy for any sailor to make the transition on to the boats and sail them well. David Mills from M32 Australia mentioned, “The M32 is built with simplicity and having only a few control lines is easily powered up making it quite easy to transition from one to two hulls.”

Racing started off slowly with sunshine but a very light south westerly wind. It doesn’t take much to get the M32’s moving and teams worked hard to keep their momentum up. SoPYC, helmed by keelboat sailor Gerard Wilson, got off to a great start which was critical in the light winds. RPYC lost their speed and skipper Alistair Murchison took a while to get going again. It was FSC, helmed by Laser sailor Ben Walkemeyer who managed to gain the lead and sail the best course to win race one. A very close finish for second and third with RFBYC, Lachy Gilmour, just sneaking in front with a little more boat speed to pass SoPYC at the line.

A change in wind direction saved the day with a swing to the east and an ideal moderate breeze which stayed for the rest of the day. Race Officer John Taylor and his volunteers quickly reset the course while the M32 teams had a good blast around, grateful of the new wind.

Race commentator Ed Fethers from Sport FM 91.3, got excited about the boats zipping around the bay as he viewed the excellent live video coverage on the screens by Qmodo and broadcast partner Front Row Screens. Race Two began with around 7 knots of wind, plenty for the M32’s to get up and flying.

The RFBYC team rotated crews then they were off and racing again. Close and exciting racing with all crews working hard, furling and unfurling the gennakers to get the most speed out of their boats. In patches it was still light enough to use them on the windward leg of the course, each team closely watching the others moves and techniques. To race fast, the M32 can be quite a physical boat and all sailors did an amazing job to work together with others that they may have only just met. RFBYC with coach Sam Gilmour on-board, his brother Lachy at the helm, won race two. The SoPYC team were lucky to have skilled M32 skipper Matt Jerwood providing on-board advice, Matt placed 3rd in the 2016 World Match Racing Tour.

On the big screen, spectators were treated to some fantastic aerial footage of the RFBYC Optimist fleet. Drone pilot Reimi Newman flew passed the smiling juniors. The young boys and girls were quite excited to be out on the water training alongside these magnificent M32 catamarans.

Very tight racing between all teams in race three. All crews had to make tough decisions at the turning gates at each end of the course. After a great tousle on the last reach with only metres between the top three boats, Gerard steered his SoPYC team to win. Only a meter behind at the line, RFBYC was second and FSC third. Robbie Gibbs’ RPYC team again coming in fourth with Etchells sailor Alistair Murchison at the helm, learning fast how to steer these exciting multihulls. There was now only one point between the top three positions going in to race four and with the time nearing 5pm, teams knew this may be the final race of the series.

Amazing close racing and a great exhibition of sailing. Young RFBYC sailor and up and coming match racer, Ethan Preito-Low made his way up to the race commentary team to be interviewed by his coach and share his experience with the crowd. Ben Durham is the Head Coach of the new RFBYC Sailing Institute Match Racing Squad.

Another rotation for the RFBYC team who were giving two multihull sailors a run in their team. Rival Hobie 16 sailors Gavin Colby and Cam Owen stepped on-board the M32 for the first time to join Lachy and Sam Gilmour and Patrick Clyne.  Lachy handed the helm over to Gavin who is twice world champion. At the 2014 Hobie 16 Open Worlds, Gavin was first and Cam was second. A few tweaks to the way they had been sailing the boat and the blue, Norwood Systems RFBYC boat absolutely flew in race four.

Second across the line was the green, WMRT boat helmed by Ben Walkemeyer and third to SoPYC.

As the M32’s finished the race, the committee signalled the end of the day and RFBYC team decided to go for a spectacular fly by. They took flight with windward hull flying, past the clubhouse and crowd watching above. A great end to a sensational afternoon of exhilarating M32 racing, all shown on the large screens with broadcast partner Front Row Screens.

Overall on 16 points (4,4,4,4,), Royal Peth Yacht Club’s team placed fourth. A close contest for second and third overall with both teams finishing on 9 points, South of Perth Yacht Club was third with race scores of 3,2,1,3 and Fremantle Sailing Club second by placing ahead in the last race of the day to break the tie, 1,3,3,2. The home team, Royal Freshwater Yacht Club won the day overall with race scores 2,1,2,1, finishing on 6 points overall.

Gavin Colby commented after the racing, “It was great to get on-board an M32, especially in front of so many members and guests watching at RFBYC. Really good to see stadium sailing has started in Perth on fast exciting boats. We had a great time with the younger sailors on-board and we learnt a few tricks from each other. I’m looking forward to the next M32 event!”

At the presentation, David Mills from M32 Australia commented about the day. “Perfect location, excellent sailing and a wonderful atmosphere would sum up the first M32 Exhibition Series. The hosts Royal Freshwater Bay Yacht Club certainly showcased the event wonderfully. Sitting on the lawn and being entertained by the teams really highlighted this great sport of ours in such a beautiful part of the world. The owners of M32 Australia are hoping to develop the class and encourage new and existing members to take up this exciting and fast form of sailing.”

He thanked the volunteers for an excellent day on the water and looks forward to the next round of the series at Royal Perth Yacht Club on 19 August.