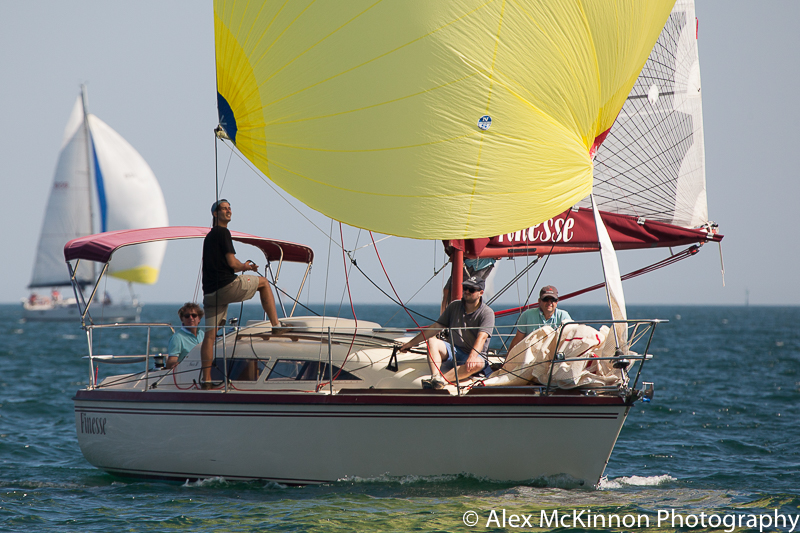 Racing began in a light 5 knots and gradually built over the afternoon with the developing seabreeze. The welcoming conditions saw the majority of the 121 registered boats across the blue and white divisions get out and sail.

The light 5 to 7 knot building seabreeze brought about a cautious start for Division 2 with most boats being a solid couple boat lengths back from the start line. Nonetheless, racing slowly continued and the Division 2 boats drag raced each other to the shoreline to maximise the developing persistent shift.

After a solid upwind ‘Smooth Criminal’ and ‘PP1’ were the first two boats to the top mark, following close behind was Rod Warren’s, ‘Joust’ who made gains on the downwind. Rod said,

“We didn’t have the best start yesterday so there was the added emphasis to make gains when we could. We sail well on the downwinds so we use this time to make most of our advancements. We’re learning that these boats do well sailing deeper angles until planing conditions arise. This year we’ve joined the Division 2 boats and it has been great competing with the larger fleet numbers not to mention the races are always run really well by race management.”

‘Joust’ now sits at the top of the ladder for the Super 11 fleet overall and also second (on countback) to Robert Date’s ‘Scarlet Runner’ and current leader Grant Botica’s ‘Executive Decision' in IRC. Gary Mackinven’s ‘Way2Go!’ still maintains the lead overall in AMS and YV Handicapping.

Division 3 boats pushed hard at the start and even had a couple individual recalls. This fleet sailed a strong upwind and even made gains on the Division 2 boats. B Feore/ G Jackon’s ‘Skipjack’ maintains their firm lead overall in IRC while P Neilson/ R Langham’s ‘Moonraker’ also continues their lead in AMS and YV Handicapping.

Nick Bartels ‘Terra Firma’ lead the Division 1 fleet around the course with John Newbold’s ‘Primitive Cool’ finishing not too far behind over the line. Bruce McCraken’s ‘IKON’ continues to lead IRC and AMS by a couple points to Mike and Mark Welsh’s ‘Wicked’. Robert Green’s ‘Dream’ leads YV Handicapping by 0.3 points to Phil Bedlington’s ‘BKT Jamhu.’ For all divisions it seems it will come down to the final race day to lock in the overall winners.

The glamour conditions did not help separate the Blue Division competitors with the top four boats all still being within one point of each other. Yesterday’s win went to Nick Knezic’s ‘Finesse’ but sits second on countback to Koos Theron’s ‘Xenia’. The Blue Division attracts many boats who wish to enjoy racing without the competitive streak that the White Division can bring about. Owner and skipper of ‘Jayhawk’, David Mileshkin, understands this and enjoys this aspect of the Blue Division racing. David said,

“I enjoy sailing in Blue Division as we get to compete in bigger fleets and sail longer races than we normally would in our standard Club racing. We also enjoy the friendly rivalry between other Club members that we get with this racing. The level of this fleet allows us to enjoy just being out on the water while still being able to compete in a race. It would be great to have even more Club Marine Series races!”

The last day of racing for the Club Marine Series kicks off on April 8 with host Royal Melbourne Yacht Squadron.