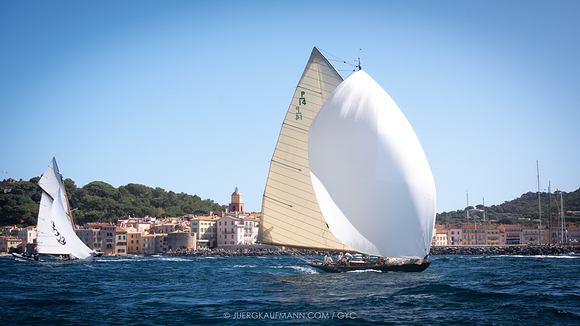 Olympian, the William Gardner's gaff cutter from 1913, and skippered by Guillaume Fetas, has won the 9th edition of the Gstaad Yacht Club Centenary Trophy in a nail-biting photo-finish with Viola.

On Thursday, the day traditionally dedicated to the Défis (the challenges), over 20 of the most handsome boats from the classic yachting circuit gathered on the waters of Saint Tropez to fight for the 9th edition of the Gstaad Yacht Club Centenary Trophy, the only sailing trophy reserved to 100 year or older boats.

The event is raced in a pursuit format with staggered starts and features an especially created handicap system, allowing very different boats in size and rig to compete on equal terms, with the first boat to cross the line off the breakwater to be declared the winner.

Sunny, blue skies, light wind conditions that never exceeded 10 knots, just perfect for the centenarian beauties, welcomed the 23 yachts – the highest number of entrants so far in the history of the regatta – on a 9 mile course in the bay of Saint Tropez.

After a real sailing duel, Olympian this year skippered by Guillaume Fetas, managed to take over Viola just five hundred metres from the finish, by hoisting the big spinnaker, getting the necessary extra speed to cross the line in first.

At the end of an exciting three hour race, the two boats were separated by only a half boat-length. Despite having won almost all the races she participated to this year, 1908 gaff cutter Viola could not write her name in the books of the Centenary Trophy for just a handful of seconds, while third on the finish line was the 10 m I.R. Marga from 1910.

“We knew from the start it was going to be tricky for the light wind conditions, very changeable. We just chose not to stick to tactical choices, but to adapt to find the best lane to catch up with the boats that started before us,” declared an elated Guillaume Fetas.

“Our competitors sailed very well, so it was hard for us to beat them. It was a great day on the water and winning with a finish like that is very cool.”

Olympian thus becomes the second boat to have won the Centenary Trophy twice after her success in 2014, together with Tilly XV, which could not defend her title this year.

Olympian is a P-Class gaff sloop designed by American William Gardner in 1913. She spent almost her entire life in the USA and scored several wins on Lake Michigan, before being rediscovered and restored in 2013 by French America's Cup veteran, Bruno Troublé, who had her delivered to the Mediterranean.

Since then, Olympian successfully took part to the top regattas and yesterday became double winner of the Gstaad Gstaad Yacht Club Centenary Trophy.

“It was a super exciting race, one of the closest finishes in the history of the Centenary Trophy. Watching such an incredible display of racing skills and boat handling on these old yachts was just fantastic,” Gstaad Yacht Club's Commodore, Manrico Iachia said.

“We are looking forward to next year; it will be an important milestone with the regatta celebrating its 10th anniversary. We will be working hard to make it a memorable event, from both a technical and a social standpoint, hoping to gather a record number of centenarians.”

The prize-giving night, with more than140 guests, was held right off the Saint-Tropez waterfront.