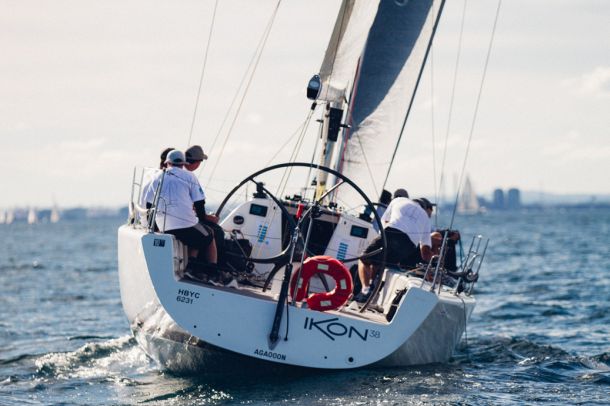 Short and sharp. Not the usual chop on Port Phillip but the Quantum Sails Sydney 38 Victoria titles that were reduced from a weekend to a single day series after 25-35 knot wind squalls, driving rain and hail pushed up from Bass Strait.

The fleet encountered light and fickle 5-8 knot west to nor’west winds on the Saturday, April 18, 2015. Looking out from the warmth of the Sandringham Yacht Club glass front on Sunday was like Armageddon in contrast.

“It’s amazing to finish off the season with a state win not long after our nationals victory,” Carnell said. “The crew were fantastic, turning the corners we had the edge on the others, and our tactician Chris Jones was amazing; we were on the line every time and on the right side of the course.”

Being the final event of the 2014-15 one design season Carnell thanked “the Sydney 38 Association for their hard work over the season and my wife Jen for putting up with me.” The Carnells are looking forward to a break…”It’s been a huge year,” Brenton admitted.

Audacious (Greg Clinnick and Paul Holden) came in one point behind Ikon38 in third, tied on points with Playground (Andrew and Gayl Robinson).

In Corinthian results Audacious placed first, then Playground and Sierra Chainsaw (Andrew, Pat and Mel Mollison). Half way into Saturday’s four races Sierra was tied with Phoenix for first but chose to go hard right in race three and four which didn't pay and put them out of the top placings.

Playground is a husband steering/wife tactician model – testing at times, especially when a penalty was taken by Playground over a port/starboard situation – but all were smiling at the regatta end.

Sponsors Quantum Sails and Ronstan supported the event, as they have done over a number of years. Dave Eickmeyer from Quantum played a very hands-on role as tactician on Stephane Howarth’s Mille Sabords and presented the prizes at Sunday afternoon’s trophy presentation.

All nine boats were represented at an excellent social function held at Royal Brighton Yacht Club on Saturday night where crews enjoyed videos from the recent nationals and stills of the day’s sailing, courtesy of Sailing Shack, plus the highlight, 100 cupcakes decorated with the Sydney 38 logo.

“No protests were lodged but the on-water jury did arbitrate on several incidents, keeping the tacticians on their best behaviour. Overall it was a very well run regatta thanks to SYC and their band of 12 plus volunteers,” commented class President Greg Clinnick.

The next event for the 38s is the Morris Finance pre-season two day series Royal Geelong Yacht Club will host over the last weekend of September, 2015. Over the Australia Day long weekend in January 2016 the class’ nationals are set to coincide with RGYC’s annual Festival of Sails.