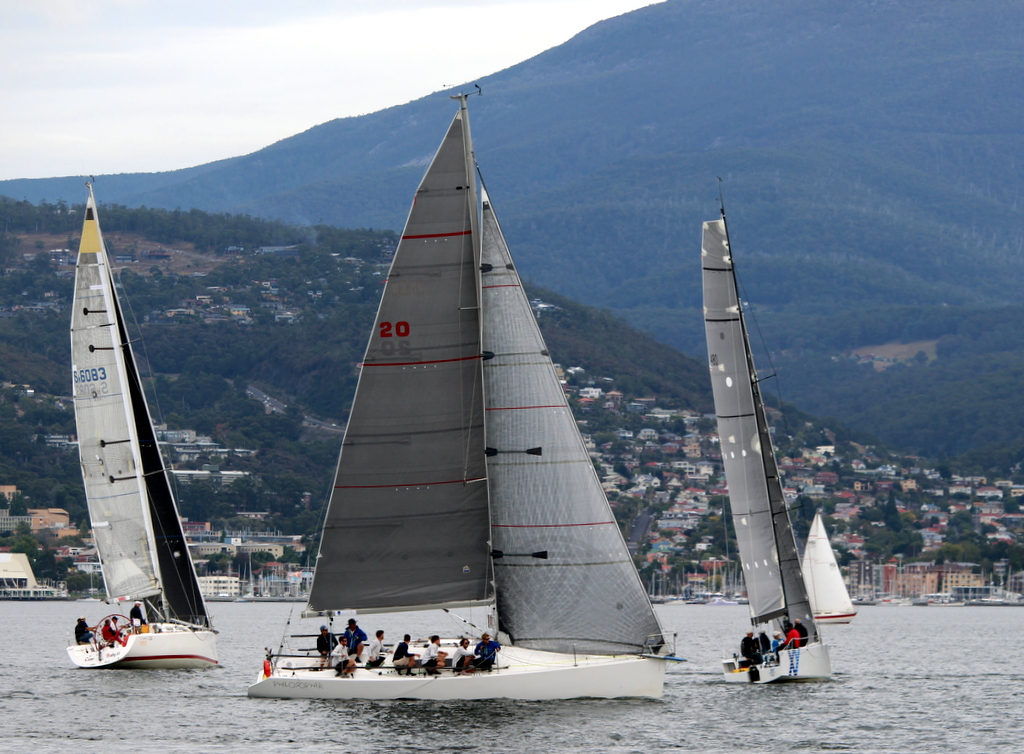 The Sydney 36cr Philosopher dominated results in Group 1 on day one of the Combined Clubs new short-course championship on the River Derwent. Photo Peter Watson.

Hobart’s newest yacht racing format, the Combined Clubs Short-Course championship, got off to a cracking start on the River Derwent yesterday.

Philosopher placed first in two out of four races under PHS scoring, and had three wins in both the AMS and IRC categories.

However, only seconds separated the top placed boats in each of the four races for Group 1, Philosopher beating X&Y (Toby Richardson) by just one second on PHS scoring in race three.

Mark Millhouse’s Masrm 25 Trouble was the stand-out boat in Group 2, winning two of three races for this fleet, under PHS scoring.

A fleet of 14 boats have entered the championship, with helmsmen and crew obviously enjoying the cut-and-thrust of windward/leeward river racing.

“We would have liked to have had a bigger fleet but the entry list is more than we were getting for the mid-river windward/leeward races last season,” Derwent Sailing Squadron sailing manager Mike Denney said.

Philosopher, sailed by a young crew of ex-dinghy sailors with Shaun Tiedemann’s son Sam on the helm, set the pace in race one for Group 1 outsailing bigger boats to take line honours and win all three handicap categories on corrected time.

With race officer Ian Ross setting the short courses down the eastern shore of the Derwent, Philosopher got caught in a wind shift in race two, finishing second last in fleet.

War Games, Wayne Banks-Smith’s Farr 40, crossed the line first in race two for Group 1, but a protest has been lodged, claiming she rounded a wrong mark.

War Games is provisionally placed first on PHS and IRC scoring, with AMS going to the Mumm 36 TasPaints (Ian Stewart)

Philosopher bounced back for the last two races for Group 1, winning all three handicap categories in race three and AMS and IRC in race four.

After four races for Group 1, Philosopher has a score of 12 points under PHS, with X&Y (Toby Richardson) and Tas Paints (Ian Stewart) both on 13 points.

In Group 2, Trouble and Alibi II (Rod Williams) are both on 6 points with T24 Another Toy on 8 points.