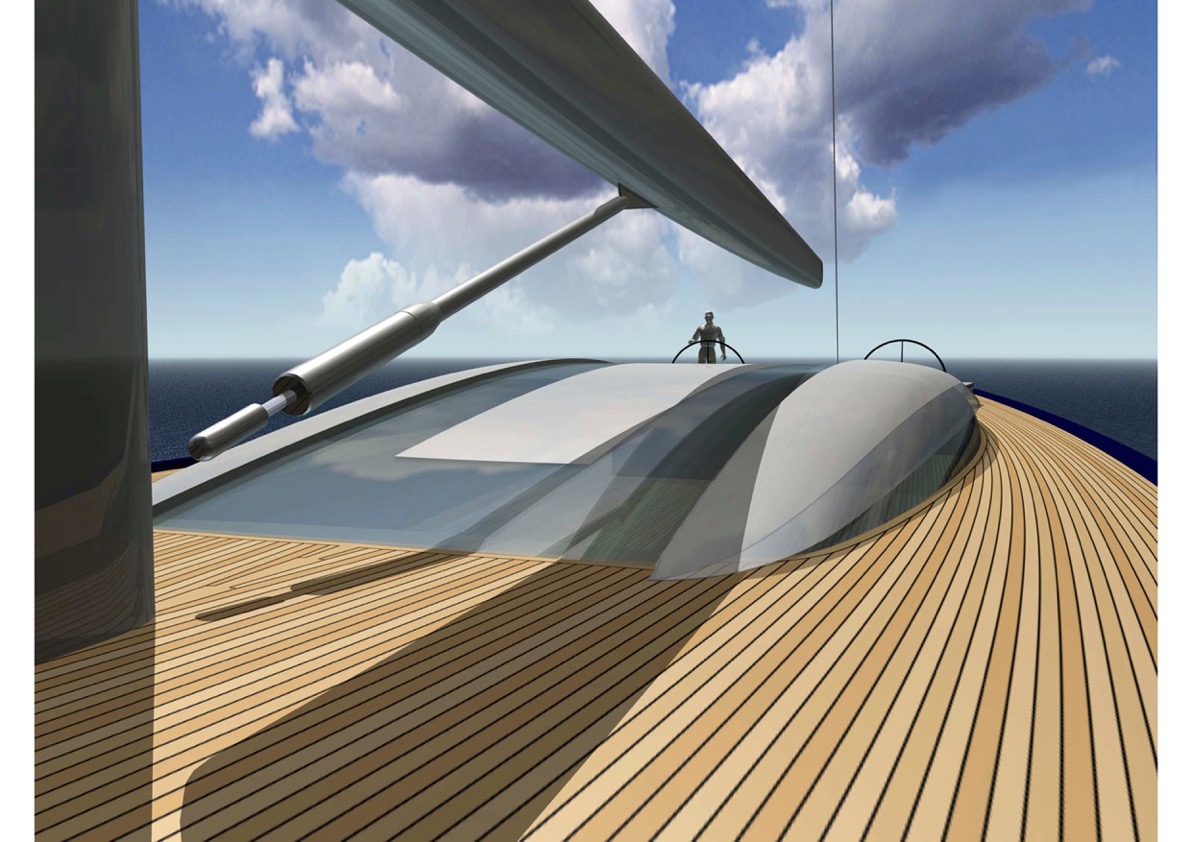 For decades Philippe Briand’s studio has been a focal point for innovative, technical yacht design. It is a place where trends – strongly based on research – are made and innovations are conceived and refined; the use of glass in sailing yacht design is no exception.

Since first introducing curved superstructure windows to his designs over 15 years ago, the possibilities offered through the advancement of glass manufacturing technology have immensely increased the potential applications available for this versatile material.

Briand ensures he keeps firmly abreast of these developments: “I spend a lot of time with glass suppliers, helping them to understand the specific requirements of using glass on board any yacht, let alone a performance sailing superyacht like Vertigo or Mari Cha IV (actual Samurai). This continual dialogue ensures that my concepts are always on the cutting edge of what is possible.”

The fashion for glass superstructures is gaining traction in yacht design circles. In coming years, the majority of new launches will have a glass coach roof at the very least, and Philippe Briand is at the forefront of this design trend with his sleek, modern concepts including the 130’ Philippe Briand design pictured. He credits the material’s continuing growth in popularity to its flexibility, as well as the aesthetic appeal of the futuristic shapes that glass can create.

The application of glass in a sailing environment in particular is interesting; the ability to bring the drama and beauty of the exterior inside adds a new dimension to the atmosphere within. Glass can offer near-360-degree panoramic views of the waterline, as well as the uniquely dramatic perspective of a superyacht mast from its base.

As Briand hears from clients very regularly, owners want their yachts to let in more natural light and provide them with a greater connection with the environment outside. Clever use of glass gives the ‘wow’ factor to any yacht design, creating beautiful, elegant shapes, while also offering an opportunity to embrace new technologies at the same time.

Though the aesthetic of his designs and concepts are key, Briand is a true yachtsman, with high- performance design in his heart. The practicality of using glass is therefore always at the front of his mind, and the ability to walk on top of these structures, unhindered, is of paramount importance. A compound security glass is often used, which is created by using two or more plies of chemically toughened glass. This glass is approved by both Lloyd’s Register and ABS, and accepted by all major classification societies.

As larger and larger areas of the superstructure can be built entirely from glass, the team at Philippe Briand has been exploring the use of compound security glass with built-in multifunctional sensor technology, which allows early detection of any glass damage. Here, integrated sensors permanently measure the state of the panes and the information is passed over to the management and alarm systems.

Another technology that has been developed is particularly crucial when using glass in the interior of vessels. You can now, with the switch of a button, create a private space on board by turning  clear glass opaque. For use in the guest and owner areas, and as clever dividers throughout, this technology stylishly and practically creates virtual space on board.

All these factors ensure that the design applications of glass in luxury yachts are constantly evolving, cementing its increasing use as a trend that we will be seeing grace the world’s favourite cruising grounds for years or decades to come.

London-based Philippe Briand has been conceiving high-performance yachts since his La Rochelle childhood, and his technical excellence and precision – accompanied by a strong artistic flair – have continued to evolve over what is arguably the most prolific career of any yacht designer today.

Early insights into naval architecture, advanced hydrodynamics and production engineering during an internship with Swedish designer Pelle Petterson armed Briand with the skills to create dozens of successful production yacht models, of which over 12,000 vessels have been built.

His portfolio spans four decades, starting with his first IOR Quarter Ton design at the age of 16. His designs for competition have included eight yachts for six America’s Cup campaigns; two of the vessels for the French team that won the Admiral’s Cup in 1991; and countless high-performance offshore racing yachts. An accomplished sailor himself, Briand has won the Half-Ton Cup in 1993 and the One-Ton Cup in 1994, in yachts of his own designs.

Briand’s first foray into superyachts came in 1995, with a winning submission for the design of the groundbreaking, award-winning 44.7m S/Y Mari Cha III, and then Mari Cha IV. The success of these lightweight, high-performance cruising racers propelled him into the world of superyachts, where he has enjoyed considerable success.

Briand and his team of designers have won over 30 international yacht design awards (to date year 2015) for their work, and have collaborated with some of the most highly respected sailing yacht builders in the world, including Alloy Yachts (New Zealand), CNB (France), Groupe Beneteau (France), Perini Navi (Italy), Royal Huisman (Netherlands) and Vitters (Netherlands). They currently produce yacht designs and naval architecture always oriented on use of new technologies – ranging from 6 to over 100 metres, both for sailing yachts and motor yacht. The team puts a strong emphasis on performance and is continually employing new technologies to enhance designs, in a quest for perfection.