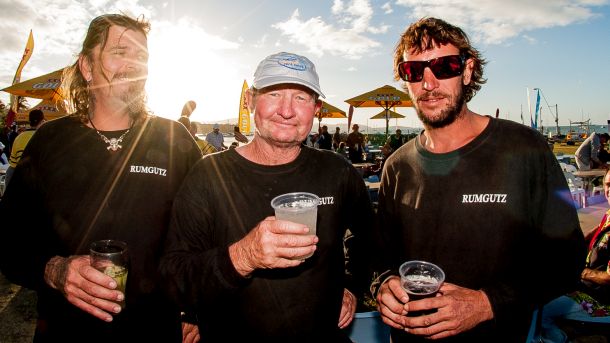 For Peter Harrison, last year’s Airlie Beach Race Week was memorable for all the wrong reasons, because his yacht, Rumgutz, capsized on the first race day – but as the old saying goes, ‘You can’t keep a good man down’.

It was not the way Harrison wanted to celebrate Race Week’s 25th anniversary, but wild weather led to the Beale 780’s capsize after it lost its keel near Double Cone Island. The result was a long tow home to Airlie Beach, but at least the crew were fine.

Now the local yachtsman, affectionately known on the water as ‘Coruba’, is set to return to the Cruising Non-Spinnaker division with his latest yacht, the well-named ‘Awesome’, a quick yacht he keeps at Abell Point Marina.

Over the years, Harrison, a member of the Whitsunday Sailing Club, Race Week’s organiser has owned various boats. He has sailed halfway around the world and raced in masses of events, including Sydney Hobarts, Lizard and Port Douglas races and several Airlie Beach Race Weeks.

A true character, Harrison lived aboard a self-built boat for 30 years. Now he and wife Angie, along with children Saylor and Miranda, reside within cooee of Awesome at in Airlie Beach.

Awesome was built in 1994 in Durban, South Africa. A quick yacht, she won the Cape Town to Rio Race in 2000 by four minutes before her owner sailed to Australia where she lived quietly until Harrison purchased her in late 2014.

“I’m very excited to come back to Airlie Beach Race Week. Me and the full crew went out for training yesterday and the boat performed very well. I’m very competitive, so it’s all good,” Harrison said.

“I love the camaraderie of Race Week and catching up with old friends. You can’t beat it, said Harrison, who has done around 10 Race Weeks. “Some on my own boats, others with Don Algie (who sponsored the event for some years) on Storm,” he added.

Enthusiastic crew member, Bill Fea says, “Keep an eye out for Awesome. You may not recognise us with new boat, new crew uniforms and styled haircuts to match!”

Fea said many thanks must go to Peter’s family, sponsors and supporters. “And the crew:  Stuart, Gooba, Rosco, Murray, Peter, Steven Seagull, Wild Bill, Carl, James Adams and Robbo the Yobbo,” he said.

Entries for the ‘Tropical Festival of Sailing’ closed last Saturday with a total of     108 boats entered, going beyond organisers’ expectations of up to 100. Huahine, the Hanse 430 owned by Nick Smail from Whitsunday Sailing Club, was the 100th entry.

Huahine is one of nearly half the entire fleet that will represent Queensland when racing gets underway on 8 August and one of 40 yachts in the Cruising (spinnaker) division.

All information, including Sailing Instructions: www.abrw.com.au/