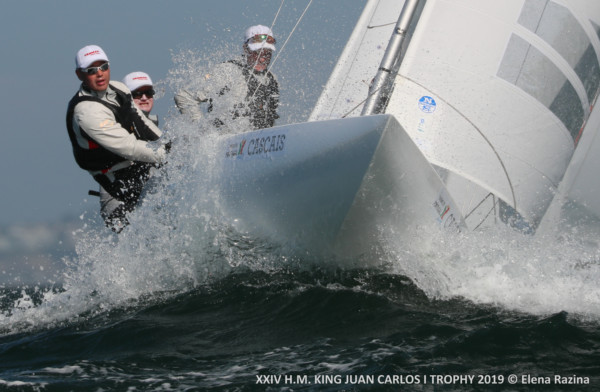 1 May 2019 – Cascais, Portugal – The opening day of the 24th HM King Juan Carlos Trophy in Cascais produced the strong winds and big seas for which this open ocean venue is famous. After the success of the inaugural Dragon European Cup regatta in Cannes in early April, the top Dragon teams from across Europe and as far afield as Japan, Hong Kong and Russia have made the pilgrimage to Portugal for this second leg of the four regatta plus Grand Final series.

The Clube Naval de Cascais provided two excellent windward leeward courses as the wind built from mid teens at the start of racing to approaching 30 knots by the end of the day. The racing was superbly competitive and first blood went to the Japanese Yanmar Team, helmed by America's Cup and World Match Racing Tour legend Peter Gilmour, crewed by Yasuhiro Yaji and Sam Gilmour. They followed this up with a fifth in the second race to end the day with a three point overall lead on their nearest rivals.

Lying in second place after two races is the Dutch team of Vendee Glove veteran Pieter Heerema, crewed by the multiple Dragon championship winning Lars Hendricksen and George Leonchuck. They opened their series with a seventh and then added a second to put them three points behind Gilmour and three ahead of the Spanish team of Javier Scherk, crewed by Paulo Manso and Diogo Barros, who put an eighth and fourth on their score card.

The second race was won by Scotland's Grant Gordon, crewed by Ruairidh Scott, James Williamson and Alex Warren, and this combined with a twelfth in race one, in which they had ended up on the wrong side of one of the big shifts, to put them into fourth overall on thirteen points, one point behind Scherk. Also finishing the day with thirteen points and now lying fifth overall is top Portugal's Pedro Rebelo de Andrade who came into the regatta leading the European Cup after his victory in Cannes and as a home waters favourite.

It was a tough day both physically and mentally for the crews. The wind was very shifty and frequently varying in strength from the low teens to high twenty knots. After racing Grant Gordon's team noted that they had done the final race with their medium jib and settings as although it was topping out at around 28 knots, much of the time it was significantly lighter so having the flexibility to change gears rapidly was vital.

Whilst the majority of the fleet racing this week are extremely experienced there is one young team taking part in their very first Dragon European Cup event. The British Scaramouche Sailing Project takes pupils from The Grieg City Accademy in London's Haringey District, one of the city's most deprived areas, and uses sailing to encourage them to reach their full potential. During the Cannes event the project's Kacey Marfo raced aboard the winning boat with Pedro Andrade, and this week Andrade has lent one of his fleet of Petticrow V6 Dragons to a team entirely made up of Project Scaramouch sailors.

The boat is helmed by Jahvarn Knight with Martin Evans, Jessey Opoku-Ware and Jaydon Owusu crewing. They did themselves proud with a 21st and 25th today, no mean achievement against such a strong international fleet in such challenging conditions. The grins on their faces as they came ashore said it all and Jahvarn Knight summed up the day for everyone when he described it simply as “epic.”

The strong conditions led to a few retirements with gear failure, including one broken mast which will be replaced overnight, but the more serious incident of the day actually happened after racing. A sudden very strong shifting squall hit the fleet on their final approach to the marina. Unfortunately Peter Gilmour caught the squall at the same time as an awkward wave and he was knocked into the boat resulting in an involuntary tack. With the jib pinned to weather and the main on the runner the boat was simply blown down by the wind and large waves.

Fortunately his is one of the latest designs with raised floor boards and increased buoyancy so the crew had time to clear themselves safely from the boat before she went down. It also gave them time to take their GPS position so they could subsequently mark the location and a dive team has been organised for early morning and hopes are high that they will be able to recover the boat and continue to race tomorrow.

With the wind forecast to be lighter in the morning the Race Committee have published an amendment to the sailing instructions to delay the start of racing from the originally published 11.00 to 13.00. Although published prior to the sinking of Team Yanmar, this delay might just buy Gilmour the extra time he needs to get his boat back and ready to race.

Two further races are schedule for tomorrow and the regatta continues until Saturday 4 May with a total of eight races programmed. Three races are required to constitute a series and a single discard will be allowed once five races have been completed.