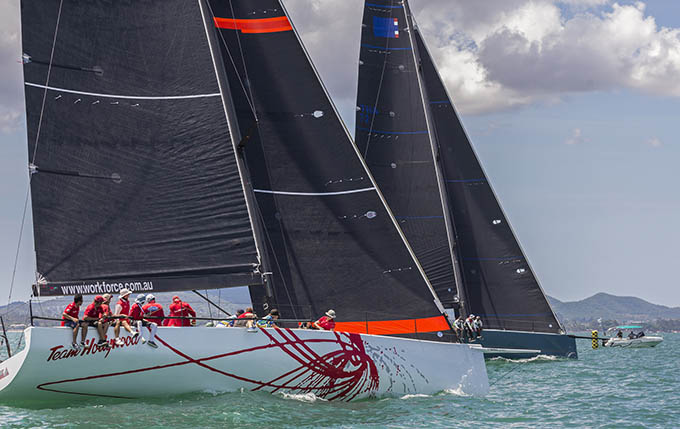 PATTAYA, Thailand – Following a marathon day on-the-water yesterday for the keelboats and multihulls, today's 10 knots of breeze at start time dropped off early on. Race Officer Jerry Rollin had to settle with a single race, though managed to squeeze in two races for the Platus which takes their series tally to five after two days. Meanwhile the dinghy classes, Optimists and Thailand SV14 Para Sailing Championship joined in, kicking off their four-day series today, turning the waters off Ocean Marina Yacht Club into a festival of sail.

Ray Roberts and his crew on Team Hollywood continued where they left off in IRC Racing 1 yesterday with good boat speed and slick crew work, leading defending champions THA72 around the course and adding a third bullet to their series tally in the process.

In IRC Racing 2 Fujin scored the daily double and at the same time put their first win on the board. Hugh Halliburton's Tenacious weren't far behind and placed second overall to retain a slim one point margin in the overall standings. Thai entry Lawana finished third on the day.

The Japanese team on Team Spray, lead by Hiroshi Kurokawa, found their groove today and beat all-comers in IRC Racing 3, claiming their first win in the series so far. SailQuest Hi Jinks and MoonShadow2 had to settle for second and third respectively.

Easy Tiger V are building up a healthy lead at the top of the Platu class with two more wins today. Meanwhile defending champion Team ViewPoint have recovered from a slower-than-wanted start on Day 1 and added two second places to their scoreline today. With that they improve their position in the overall standings. Pine-Pacific placed third in the first race while YRAT claimed third in the second race.

In the Multihulls class, BladeRunner IX added their first bullet and in the process they jump to the top of the standings. Sonic (DNF) and Edenko (DSQ) had a tough day in the office and look to re-group tomorrow.

The introduction of Para Sailing to the regatta this year is a Thailand first and fleet racing of the new two-handed SV14 dinghy is a world first. Seven teams hit the water today and in the 10 knots of breeze at start time the fleet performed well. As the wind softened towards the end of the second race, the Race Officer had to call it a day and send the fleet back to shore.

Split into Gold and Silver fleets, defending his 2018 regatta crown is Thai youngster Panwa Boonak who got his series off to the best of starts winning the only race of the day in the Gold fleet. Fellow Thai National Team Sailor, Patihan Vorrasart, was hot his heels placing second while Malaysian youngster Wong Xiang scored third.

Two races were completed before the wind dropped and in Class 8 it was Albert Nazarov who finished top of the standings with a 2,1, tied on points with Ralf Donner while Sakchai Petchdee is placed in third.

In Class 9, Malaysian sailors performed best over today's two races with Israr Hazim B.Ismail topping the series by a single point ahead of Nur Shazrin Mohamnd Latip and Ahmad Latif Khan B.Ali Sabri Khan who are both tied on five points.

In Class 10, seconds separated the leaders today and after a slow start with a fourth in Race 1, Supparak Niamruksa bounced back to win the second race and is now tied on points with Malaysian sailor Mohammad Shahieran Rin Raiman. Patcharee Sringam sits one point further back in third.