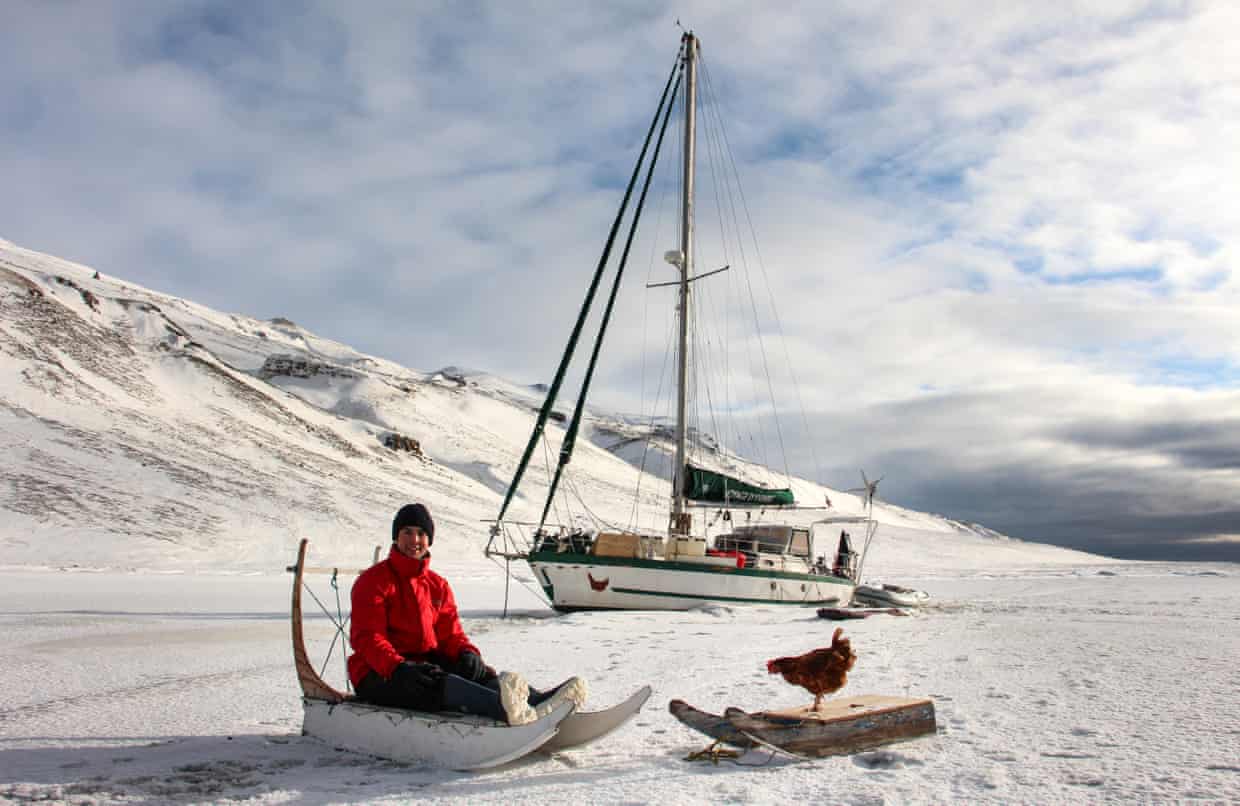 ‘I made her a little sledge and we went exploring. She loved it’: Guirec and Monique in Greenland. Photograph: Guirec Soudée.

The Guardian. By Emma Beddington.

At the tip of Brittany’s wild, wet Côtes-d’Armor peninsula is the village of Plougrescant. Beyond that, butting right out into the sea, lies Yvinec island, a tiny outcrop intermittently accessible depending on tides via a rock-studded expanse of dunes and seaweed. To get there I have taken two planes, a train and a puzzling automobile. It has been an epic journey, but I can’t possibly say that to Guirec Soudée when he picks me up for the last leg in his 4×4. I may have got lost in a Brest industrial estate at midnight, unable to make the hire car headlights work, but the 26-year-old Breton sailed around the world solo for five years. During that time he was trapped in Arctic ice for 130 days, survived 15m waves, nearly capsized repeatedly, was imprisoned briefly by Canadian coastguards and became the youngest sailor to navigate the formidable Northwest Passage between the Pacific and the Atlantic solo. Well, I say solo. Sole human. He was accompanied by a chicken, a Rhode Island Red named Monique.

From January 2014 to their return to Brittany in December 2018, the pair covered 45,000 miles. They crossed the Atlantic, travelled to the North and South Poles, across to Cape Horn, back to the Caribbean and home, punctuated by stops to repair the boat, wait out the weather, or earn money. Every adventure, encounter and disaster (there were plenty of all three) was recorded in jaw-dropping pictures and funny videos on their increasingly popular social media accounts (they now have 125k Facebook and 42.8k Instagram followers).

That was where I discovered – and fell hard for – the pair. A handsome, fresh-faced young adventurer and his stoic brown hen on their plucky little boat felt like a gift: an uncomplicated shot of sunshine in a dark time. Their story is an internet-age Boy’s Own adventure: Guirec paddleboarded through icebergs, met polar bears, caught huge fish and even saved a drowning poodle.

Meanwhile Monique shared his breakfast (and, indeed, his paddleboard), bewitched Inuit kids who had never seen a hen, and perched on deck, contemplating the vastness of various oceans. No surprise then, to learn that their children’s book, The Hen Who Sailed Around the World, has already been published.

Guirec (sans Monique) meets me in Plougrescant’s car park – a slight, garrulous and smiley figure in a big jumper – and we head off at a slow trundle across the bay to Yvinec. It is a private island (acquired cheaply after the war by the Soudée family), current population four. In addition to Guirec and Monique, there’s Bosco the dog, a rangy part-husky giant who waits on the headland to greet us. (“I got him in Alaska: I swapped him for a chainsaw.”) Girlfriend Lauren, who met Guirec through his Facebook page, is the fourth, part-time resident, helping out with his increasingly time-consuming social media commitments and public engagements. Guirec: “You’re sort of Breton now though, aren’t you?” Lauren (firmly): “No, I’m Parisienne.”

They share the handsome stone farmhouse in which Guirec grew up, a dreamy place with cornflower-blue doors and shutters and huge open fires. The sea is everywhere: we take a tour, clambering up the rocks so Guirec can point out the inlets, coves and best crabbing spots of his stretch of windswept coast. If ever a place were perfectly designed to raise an ocean-going adventurer, it’s here. His was a wild childhood: the youngest of eight siblings raised by an indulgent father, he was largely left to amuse himself. “I spent more time on water than on land. I got my first boat at seven and even before that, I would go out to sea to drop off my lobster pots and catch fish. This island made me.”

Read the full story and see more photos of Guirec and Monique at The Guardian.