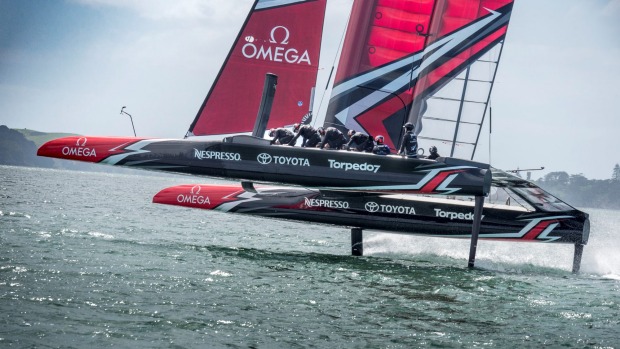 The Kiwi syndicate are in the final phase of testing in Auckland before transferring to Bermuda ahead of the opening races on May 27 (NZ time).

It's been a hectic six weeks since launching their new AC50 and bedding in radical new systems. Once comfortable with them, the team has really put the heat on squeezing every bit of performance out of the foiling monster.

Thankfully it was the back of the boat and not the front, given the dangers of being exposed to knife-edge foils and rudders.

“I've seen the Oracle guys go over the front beam a few times in manoeuvres, and that's something we definitely don't want to be doing,” Burling said, speaking of the dangers to his five other crew rather than himself.

“Chances are they're going to be hit by something and have a pretty serious injury. We're definitely trying to negate those risks as much as we can. It's definitely in the back of your mind that you're responsible for that.”

Importantly there was no panic on board without their key man at the wheel. The boat was slowed, Burling collected and returned, and training resumed – with a fair bit of ribbing, of course.

Continue reading at stuff.co.nz, including Glenn Ashby's comments on the incident.