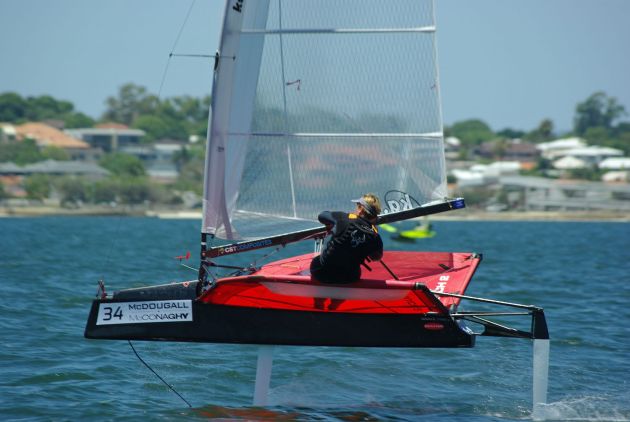 Five days of frenetic foiling will begin on Monday 4th January as the McDougall McConaghy 2016 International Moth Australian Championship gets underway under the burgee of the South of Perth Yacht Club on the Swan River in Perth, WA.

Up to 15 races are scheduled on two race courses in Melville Waters on the azure waters of the Swan River with the Perth sky line as a backdrop.

55 competitors are entered in total. Sailors from Western Australia, NSW, Victoria, Queensland and Tasmania are joined by Internationals who have travelled from as far away as Italy, Japan, Hong Kong, Great Britain and USA.

Some of the favourites to take the Australian title include Josh McKnight from Sydney who was third in the 2015 Worlds in Sorrento, Kurtis Warner also from NSW, who won both practice races in Perth today, Mach 2 builder Andrew ‘Amac’ McDougall from Victoria and Rob Gough from Tasmania. Other strong contenders from NSW are Warren Sare and Joel Castle.

Strong local Western Australian sailors include Steven Thomas and Fang Warren and internationals to keep an eye on are the Italian brothers, Stefano and Gian Maria Ferrighi.

It was a busy course area with a lot of traffic and being a practice day it is hard to read into the results but Kurtis Warner took two bullets chased by Josh Mcknight scoring (2,6) and Warren Sare (9,2).

The championship gets underway on Monday with 3-4 races scheduled with a first start time of 1255 hrs local time. Racing takes place every day finishing on Friday 8 January.

For full results and more info go to: www.sopyc.com.au