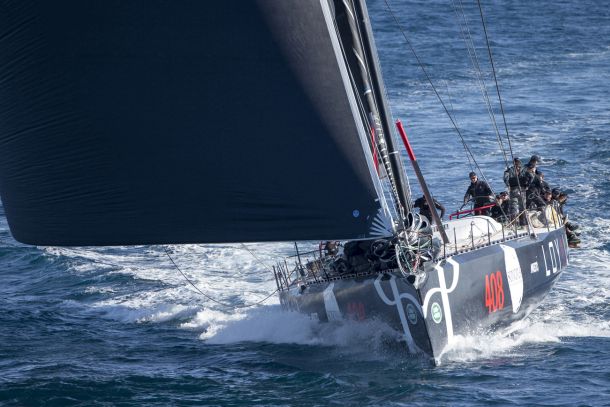 Perpetual Loyal finished well outside the record of 22 hours 03 minutes 43 seconds set by Wild Oats XI in 2012, due to light weather.

Bell, who had further alterations made to his yacht, was very happy with Perpetual Loyal’s performance given the light weather encountered on and off throughout the race, in particular at the start yesterday and most of today.

Apart from the light fickle start, Perpetual Loyal was never seriously challenged for the line honours title, as Peter Harburg’s Black Jack (Qld) could not peg Bell’s boat back. However, the V70, which has also been under the knife to improve her light weather performance, did close the gap to 20 nautical miles as her larger counterpart closed in on the finish line. Black Jack is expected to finish within two hours of Bell’s boat.

Now the battle is on for the overall win. Currently, Chinese Whisper is the leader. Rupert Henry recently purchased the JV62 out of Europe and many felt she would be the dark horse. Black Jack currently sits in second place and Ichi Ban, the former Shogun V purchased a short time ago by Matt Allen, is third.