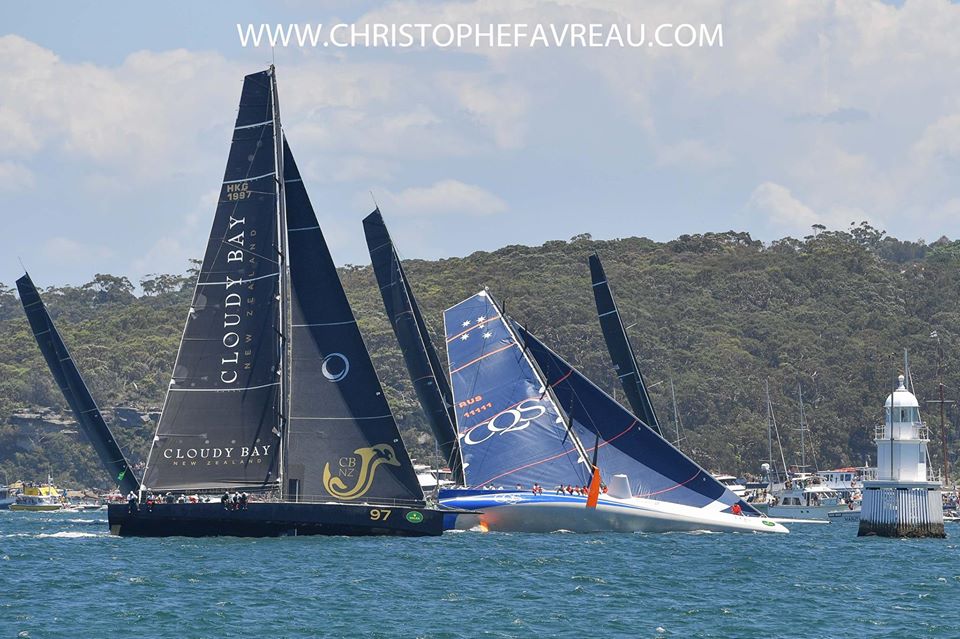 CQS on her side - Christophe Favreau pic.

Boxing Day 2016 at the CYCA in Rushcutters Bay. Situation normal. The four fingers of the marina were alive with humanity as the 88 remaining entrants in the 2016 Rolex Sydney Hobart finalised their preparations. (Jason Bond's Beneteau 47.7 Enigma was a late withdrawal owing to engine problems.)

Some boats were a picture of calm with owners and crew loading sails and food quietly and methodically. On others there was a hint of panic as last minute problems were sorted out.

But one by one they left the dock and headed out into the harbour where they were required to pass the start boat with storm sails flying, to assure organisers they were fully prepared.

Then the games began. There were three start lines and this year skippers were asked to stay in their designated areas. But that didn't stop a little bit of intimidation among the highly competitive crews.

Finally the warning signal was fired and the serious jostling for position began.

Wild Oats XI skipper, Mark Richards, did as he always does and lined the big silver beast up on the northern side of the harbour at the pin end. With a moderate north-easter blowing, that gave him a good angle of sail towards the turning buoy off Manly but meant he had a very short run to the spectator fleet on starboard before needing to tack.

Scallywag and Perpetual Loyal pinned Oats, causing her to duck the bulk of the fleet. “I can't (expletive deleted) see,” was a loud call from Mark Richards, followed by “That was a terrible start!”

Scallywag and Loyal were racing only metres apart and CQS got into trouble and was laid right over after a close port/starboard. John Roberson, media manager for CQS later explained what happened. “They had to make a crash tack to avoid another boat, at that moment the engine that drives the hydraulics stalled. They were unable to swing the keel across as the boat tacked. This left them heeled to an extreme angle, and going very slowly.”

On Loyal Tom Slingsby was calling tactics and he worked over David Witt on Scallywag. As they both tacked back on to starboard, Loyal was in a dominating position with Scallywag in her bad air. The black boat moved further ahead and Witt was forced to tack away looking for cleaner wind.

Wild Oats eventually recovered and moved up closer to Scallywag's transom as the leaders approached the first turning mark. Beau Geste had surprised many by slipping up the eastern side of the harbour and pipping the other three 100 footers to the first turn.

Loyal was well short of Camanche's record run to the outside mark, which was set under reaching conditions, but she held a comfortable lead over Oats, which called the overlap on Scallywag.

However, last year's dramas came back to haunt the Loyal crew, with a slow deployent of the asymetrical spinnaker. The problem was repeated on Scallywag, which had to refurl and redeploy.

Finally the big boats were all out of the harbour and heading south at speed, with the north-easterly picking up to more than 20 knots. Loyal maintained her lead and was heading further offshore than Oats, which was uncharacteristically “rock hopping”, giving the crowds at Bondi Baech a quick glimpse as she flew past.

Back on the other startlines there was similar mass confusion, with cries of “starboard”. Defending champion Balance was looking good as she turned south and it was great to see the beautiful 64 footer Fidelis, which took line honours in the race 50 years ago, making her way down the coast. Near the rear was the smallest boat in the fleet, Maluka of Kermande. Richard Lees’ 71 year-old Freyja was looking likely to be last outside the Heads, but at 1.50pm, Murray Owens’ Simplesail Mahligai with a Russian crew aboard, was still exiting the Harbour. It is presumed she was late to the start.

After two-and-a-half hours, Wild Oats had taken the lead and was 0.6nm ahead of Perpetual Loyal. Both yachts were doing in excess of 20 knots down the NSW coast. Check the tracker here.