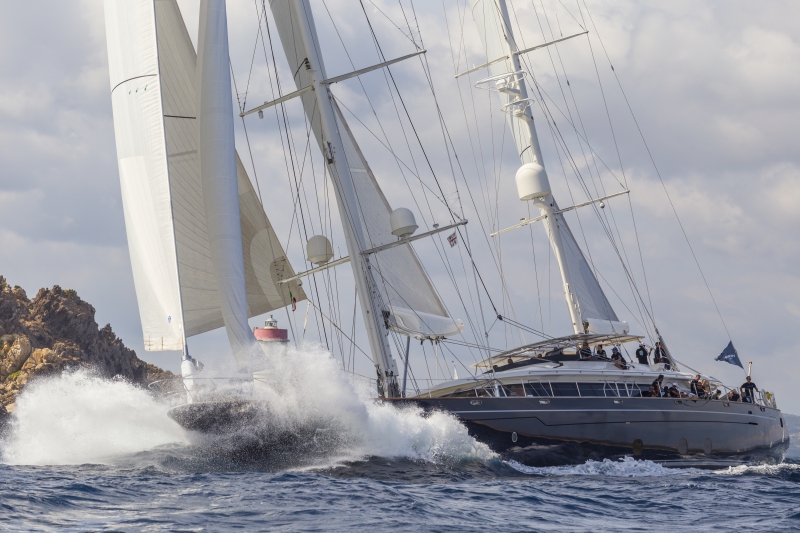 Porto Cervo, Italy. 20 September. The Perini Navi yachts unfurled their sails this morning for the first of three days of racing in the seventh edition of the Perini Navi Cup, an event organised by the Yacht Club Costa Smeralda and running through Saturday 22 September.

Racing for the two divisions, Cruiser Racer and Corinthians Spirit, got underway on time this morning at 11.30 a.m. using a staggered start formula (a start every three minutes). The boats completed coastal courses of 25 and 21 nautical miles accompanied by a north-easterly wind of 18 to 20 knots and lumpy seas. From the start off Capo Ferro the Perini ships headed towards the Monaci island and from there to the Secca Tre Monti and the Bisce strait before turning south. While the Corinthians rounded Mortoriotto and headed for the finish line, the Cruiser Racer group carried on to round the island of Soffi before crossing the same finish line off the islet of Nibani.

The Cruiser Racer fleet remained compact from the off, and only at the finish did the 60-metre Seahawk gain some distance over the 50-metre Silencio – which finished second in real time but took the win of the day in corrected time ahead of Seahawk in second and Victoria A in third place in the provisional classification.

In the Corinthians Spirit class, the 64-metre Spirit of C's took an early lead but was overtaken by the impressive 88-metre Maltese Falcon which took the lead after rounding the island of Monaci and stayed at the front of the fleet for the rest of the race to claim the top spot in the provisional classification. Spirit of C's placed third in corrected time behind the 52-metre Tamsen in second place.

On their return to the docks the participants enjoyed a wine-tasting organised by Marchesi Antinori, and the evening will continue in Porto Cervo's central piazzetta where guests will take part in an exclusive cocktail by Vhernier. A dinner for owners and an event for the media will follow.