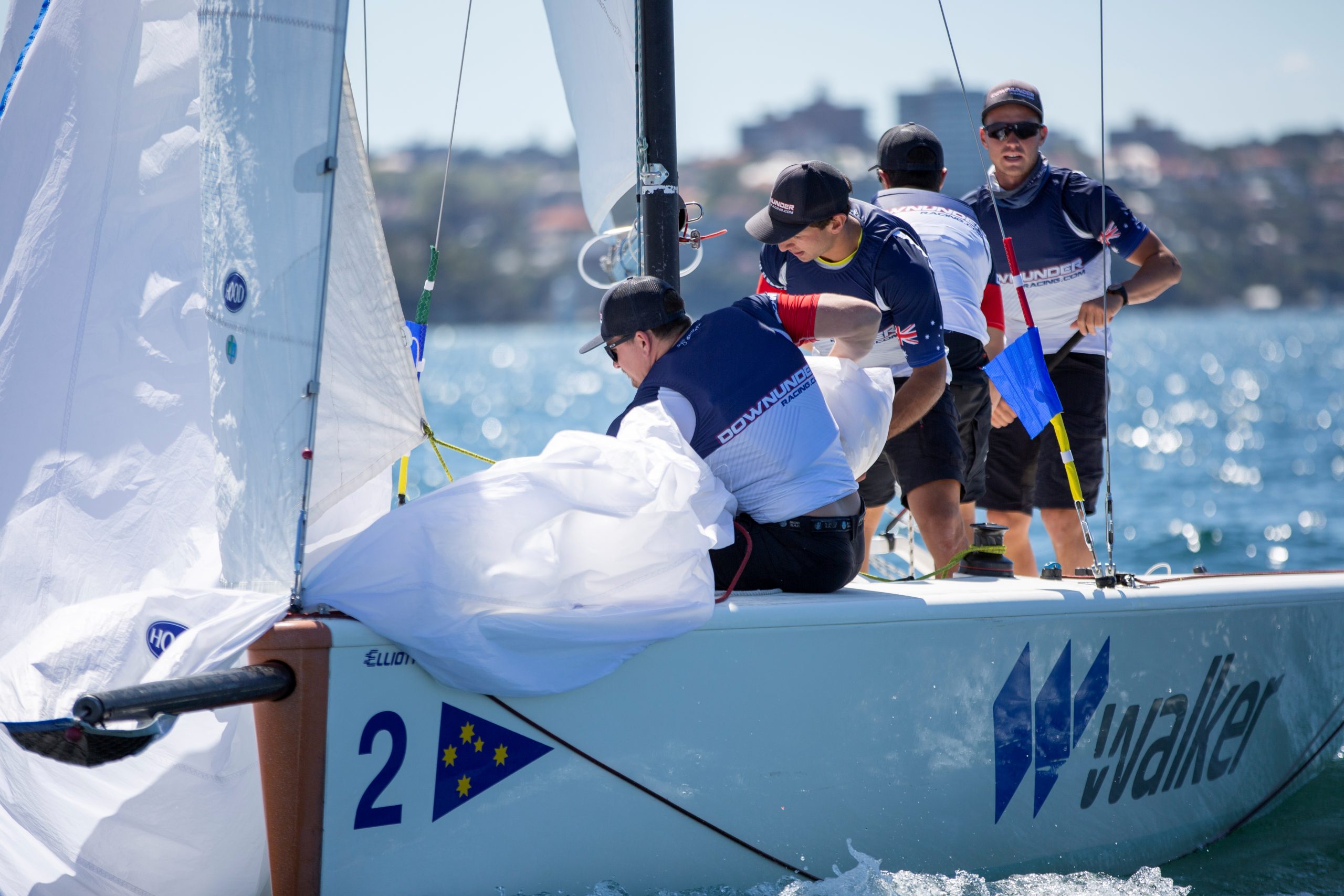 DownUnder Racing, which regularly competes on the World Match Racing Tour, made light work of most of their competitors, which included a close win over Price’s elder sister Olivia, who sits in second place overall after Round Robin 1.

After an hour and a half delay in the morning, due to lack of wind, CYCA Race Management got racing underway at 1130 hours in the vicinity of Rushcutters Bay, the Championship making a return to the waters of Port Jackson.

Olivia’s only other loss came against James Hodgson from Queensland in the opening match of the day. Both teams traded the lead several times after Hodgson led off the line. Price managed to roll on the first downwind, but a close upwind saw Hodgson regain his lead.

On the final run, both boats threw in numerous gybes, with the Queenslanders holding on to an important win.

DownUnder Racing also had a close match with Hodgson, trailing for the first three legs of the race. Unfortunately for Hodgson, a pre-start penalty cost him the lead and the win, with his opponent going on to take all seven wins in their matches today.

“It’s always great to come back and compete in events at the Cruising Yacht Club of Australia,” Price commented after racing.

“We haven’t done a lot of monohull match racing in a while, so it was good to get back into it with the boys and we have made a solid start to our campaign this weekend,” Price said.

With the host yacht club’s teams out in front, the chasing pack includes New Zealand’s Jordan Stevenson in third place on 4 points, then a cluster of teams on 3 points, as they head towards the semi-finals on Sunday.

Representing Mooloolaba Yacht Club, James Hodgson, who is part of the CYCA Youth Sailing Academy’s training program, sits in the semi-final position of fourth place after today’s round robin.

Last week’s Australian Women’s Match Racing National Championship winning crew, Clare Costanzo, takes the helm this week and trails in fifth, also tied on 3-4 with Noosa’s Klade Hauschildt, who is taking the helm for the first time in over four years of match race competitions.

Royal New Zealand Yacht Squadron’s Celia Willison, runner up at last week’s Women’s Nationals, had a tough start to the competition. She won two matches before being docked half a point after a collision in the pre-start against Klade Hauschildt in Flight 6, resulting in damage to Hauschildt’s Elliott 7m bow.

Racing will continue tomorrow in the vicinity of Rushcutters Bay for Round Robin 2 at 1000 hrs. Follow the racing live via cyca.com.au/live-results