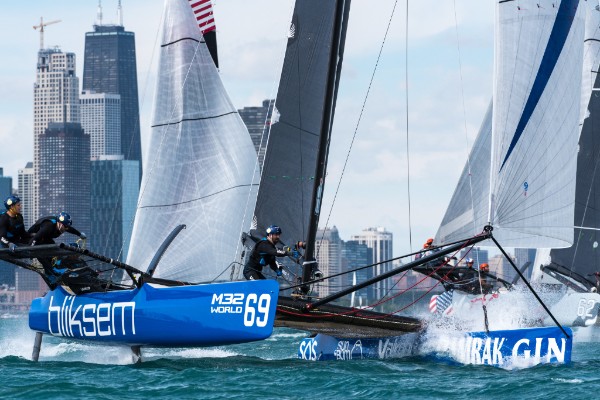 Chicago, USA: Day two of the M32 World Championship was a drastic change of pace from yesterday’s light-air affair, as westerly winds in excess of 25 knots upset the leaderboard and tacticians worked hard to stay in phase all day with drastic wind shifts defining the heavy air race course.

Most notable of the day was Pieter Taselaar’s Bliksem Racing which climbed into second overall after posting consistent top four finishes all day.

The team’s strategy of milking the left hand side of the course and keeping a calm, quiet boat on a day where a single manouvre could have lost the lead paid massive dividends. The team’s excellent boat handling especially shone on a day when several other teams lost leads due to incomplete tacks and muffed gybes.

“We really like when the breeze is on since our team is good at managing the puffs,” said Taselaar.

“We tacked and gybed twice as much as anyone out there. While at times we were watching REV and ChinaOne.Ningbo coming up on us because of this, we decided to not focus too much on them and get dragged into a dogfight.”

Conditions also proved to be more favorable for Grave Digger who dug themselves out of obscurity with a few solid starts and top of the fleet finishes. However, other parts of the fleet weren’t so lucky.

While Bliksem Racing was banking on their maneuverability and Grave Digger dialed into the breeze, Don Wilson’s hometown favorite Convexity lost her footing in the third and fourth races. She dropped down the leaderboard in what was expected to be a breakout day.

However, despite two finishes in the bottom half of the fleet, Convexity’s crew re-collected themselves for the last race putting them at one point behind Bliksem Racing on the overall leaderboard.

Rounding out the day was regatta leader, ChinaOne.Ningbo, who clawed their way back through the fleet after a series of unfortunate starts to retain their lead.

“We’re not really pushing the starts too hard when we know we have a lot of speed to burn through the rest of the course”, skipper Phil Robertson said.

“It’s a fleet where it’s just as easy to get a twelfth as it is to win; it’s just the last place stings a bit more.”

At the end of the day, ChinaOne.Ningbo maintained their lead by 20 points offering the team a comfortable vantage point to approach the weekend’s racing.