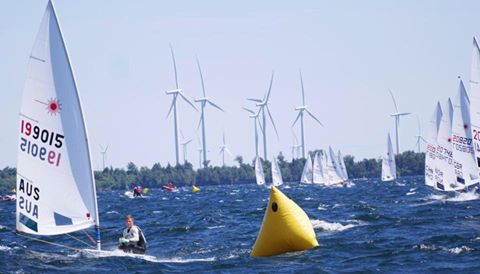 Western Australian Laser sailor Matt Wearn made the perfect start to the 2015 Laser World Championships at Kingston, Canada, when he won both of his races on the opening day. Wearn sits on top of the leaderboard ahead of Juan Ignacio Maegli and Philipp Buhl, with 2012 Olympic silver medalist Pavlos Contides in fourth and perrenial podium sitter Nick Thompson in fifth.

World Number One Tom Burton had a bad start to the event, recording a 19th in the first race. He followed up with a 4th place in the second to sit in 29th place, behind three other Australians who are all tied on 22 points – Luke Elliott, Mitch Kennedy and Jeremy O'Connor. Ryan Palk is the secon best Australian, in 19th place with scores of 8 and 11.

With only one place available to each country at the Rio test event next month and at the Rio Olypics in 2016, the battle for the Laser position will be an absorbing one. It was generally assumed that when 2012 Olympic champion Tom Slingsby retired from the class to concentrate on America's Cup sailing that Tom Burton would automatically assume the mantle of top Australian. He sat comfortably at the top of the ISAF World Rankings and seemed the logical choice for Rio.

However, this year Matt Wearn has beaten Burton on two major occasions and is now ranked second in the world rankings, which are very slow to change. Burton is a fighter and won't give up his spot easily. But the best news for Australia is that the battle will make whoever does get the Olympic berth a better sailor.