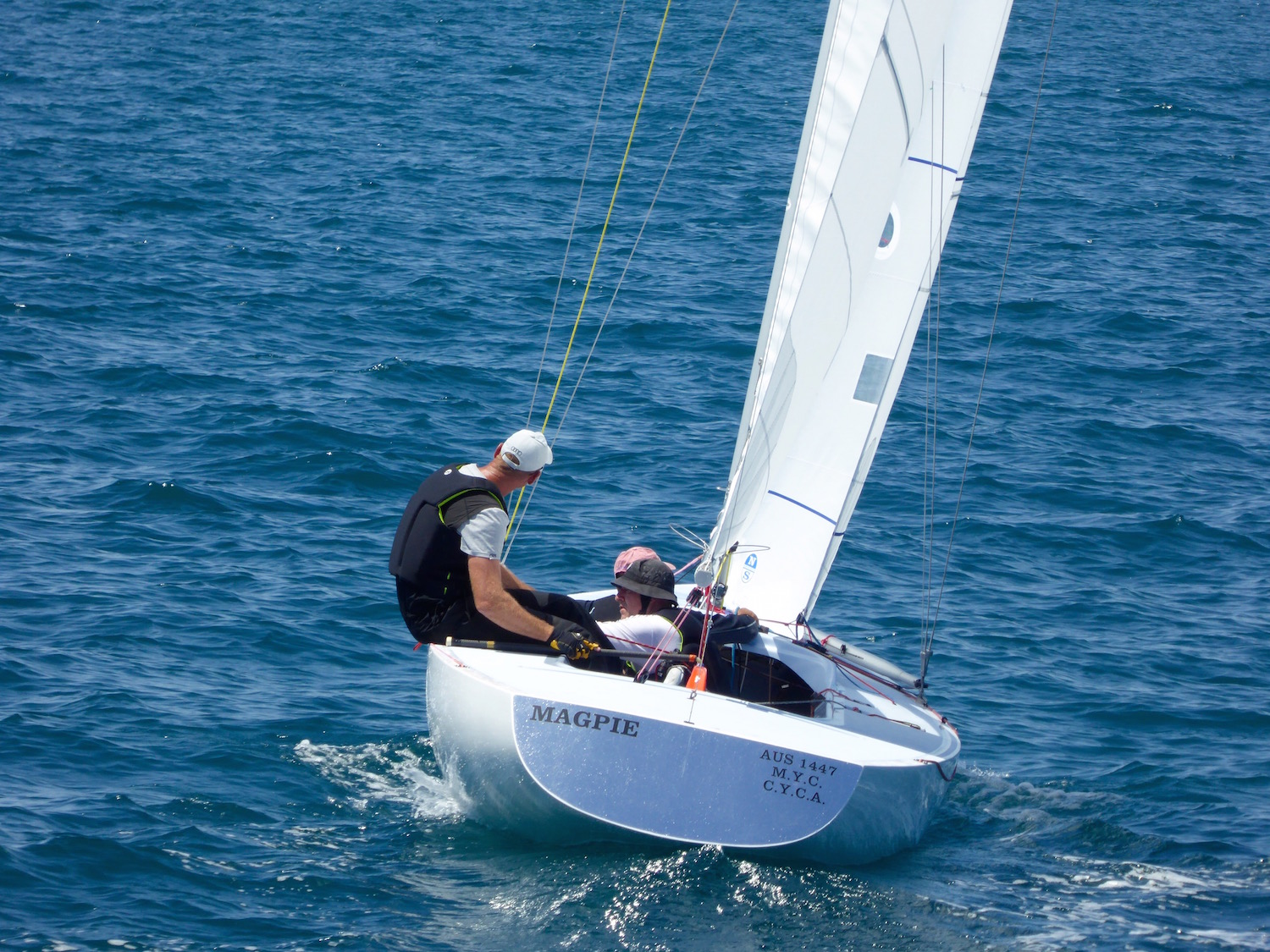 Day 1 of the 2018 Etchells Australian Championships was a blast, a typical warm summer cloudless day on the waters off Fremantle with three back to back, 2 lap windward/leeward races. The breeze begun in the East at 6 – 8 knots for the first race, then shifted to the South increasing to 15 – 17 knots and finally the sea-breeze threatened with 18 – 19 knots and short sharp waves to provide some great downwind surfing.

Race 1 was a slow start with the whole fleet of 32 boats staying well back from the line. The light breeze did shift gradually right forcing a split in opinion as to the right way to go upwind. Graeme Taylor and his crew on ‘Magpie’ from Mornington YC in Victoria was late to cross the start line but immediately headed out on port tack to sniff out the breeze. It seemed to pay as they rounded the first top mark in the lead from Martin Hill’s ‘Lisa Rose’ from Royal Sydney Yacht Squadron in second and local WA sailor Martin Webster sailing ‘Highlander’ in third.

With the wind clocking right the run became a bit more of a reach to the bottom gate. The two leaders joined by Chris Hampton’s ‘Tango’ from Royal Brighton YC in Victoria and Ray Smith’s ‘St Johns Dance’ from Royal Perth YC, gained ground. The course was changed to accommodate the shifts and whilst the two lead boats covered each other tacking on to starboard tack, the majority of the fleet headed offshore. Martin Hill ‘Lisa Rose’ broke the cover to snatch the lead and glide down to take the first gun of the regatta followed by Graeme Taylor’s ‘Magpie’ with Jeanne-Claude Strong and another talented Sydney crew from RSYS taking places to cross third.

Just before the start of race 2 the wind steadied around 220 degrees and increased to 15 – 17 knots. Most of the fleet changed jibs and adjusted settings for the new conditions. Another clear start with the majority of the fleet heading to the favoured left hand (inshore) side of the race track. Michael Manford sailing ‘The Croc’ and his team from Royal Freshwater Bay YC in Perth were first to round from Graeme Taylor’s ‘Magpie’. The whole fleet surfed downwind as the white caps started making an appearance on the course. The lead places remained the same at the gate although the fleet were very congested at the turn. On the second lap the majority of the fleet again worked the inshore side of the course up to the windward mark off Carnac Island.

The whole fleet were well spread across the course downwind but nobody could catch ‘The Croc’ and Michael Manford and his team chalked their first win of the regatta. Graeme Taylor second again and Queenslander David Turton ‘This Thing is Ours’ on the podium in third.

With the threat of heavy winds on Wednesday, PRO Kim Laurence decided to run a third race as the breeze freshened to 19 – 20 knots and the waves got a bit steeper.

This time the whole fleet were called back twice under U flag until the PRO lost his patience and brought out black. It very nearly caught out a couple of boats but the final attempt was clear.

As per the usual pattern the majority worked the left (inshore) and after a punishing 20 minute upwind leg, Michael Manford and his local team from RFBYC led at the top from Graeme Taylor’s ‘Magpie’. This time the chasing pack included a number of other contenders including Bruce Ferguson’s ‘Whisper ll’ from Royal Prince Alfred YC in Sydney and Chris Hampton’s ‘Tango’ from Royal Brighton YC. Once again David Turton ‘This Thing is Ours’ seemed to enjoy the fresh conditions working into the lead for the last run.

The last run was a real blast with the whole fleet surfing down waves with places changing all the time mid fleet. David Turton scored his first bullet, Michael Manford settling for second and Jeanne-Claude Strong from RSYS again having a great downwind leg to take third.

After 5 hours of racing there were no retirements but a weary bunch of sailors returned to the Royal Perth YC Annexe for refreshments care of Gage Roads and the daily presentations with special guest, Tony Manford, a multiple Etchells and Dragon champion handing out the Paul Nelson wines to the winners.

The forecast for day 2 (Wednesday) is for heavier winds from early in the morning with a S/SW typical ‘Fremantle Doctor’ building from 20 knots to 30 knots later in the afternoon so it will be on for young and old.

Graeme Taylor skipper of Magpie is pleased with the forecast saying, “We are looking forward to the forecast of more wind tomorrow, this is what we have come here for, the more breeze the more fun. Bring it on.”

“In the second race a couple of false starts and we managed to get a clear leeward end start and had good boat speed and managed to cross the fleet. Once you are in front in an Etchells fleet it’s hard to stay in front but it’s a lot easier than when you are behind.

“We got another good start at the leeward end in the last race of the day and were second round the top mark and managed to run away downwind to be first round the bottom mark the first time. We got passed by Dave Turton when he got a shift out on the right and we couldn’t catch him but managed to get second.

“The surfing was excellent, once you got on a wave you could sail by the lee and often stay on it for 20 seconds and make up a whole boat length on a boat that didn’t catch it. It is a very even race track and tomorrow we just have to smash into it and try and get the job done.”

David Turton (This Thing of Ours): “The first race we were found wanting, we didn’t get off the line at all and the way the breeze changed, it was a one way track downwind. We got ourselves back to the middle which is good.

“The second race the breeze was in a bit more, we had good solid starts, nice upwinds, nice downwinds and the third race was pretty tight, we went around the top mark with Mike Manford and around the bottom separate marks together and they went left and we went right, but the shift went enough for us to get across his bow and we managed to hold him out downwind.

“The short steep swell is just plenty of fun, plenty of pressure on the boat, on the chute and lots of bouncing upwind it was a really good test,”

Looking forward to tomorrow; “Two races in 25 knots thats going to be a blast! Seriously good fun, I hope we get at least one race tomorrow even it is fresh to frightening it makes unreal sailing.”