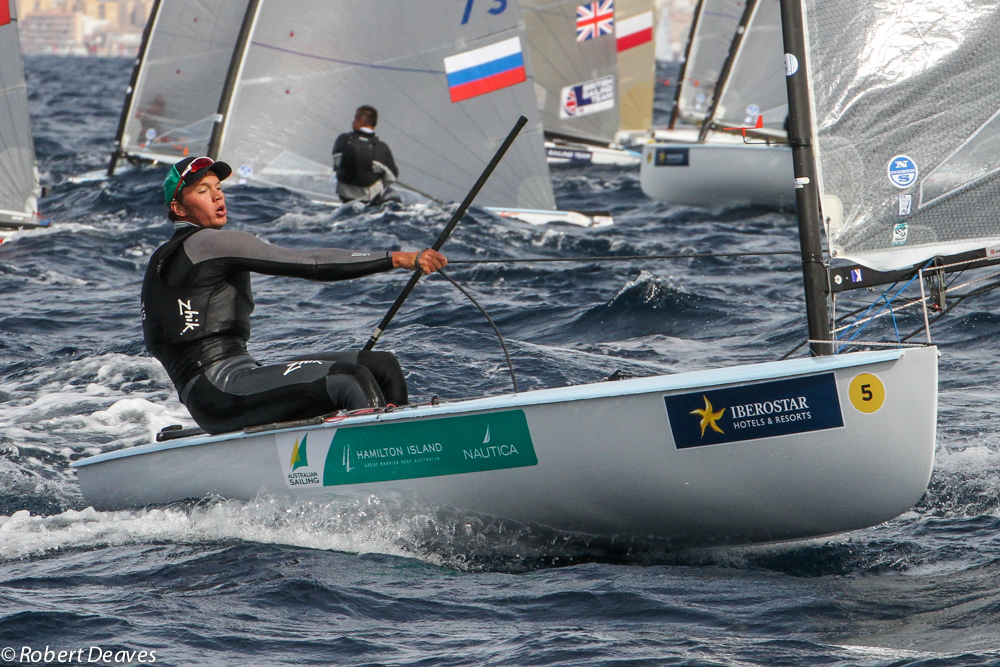 The Finn fleet got off to a perfect start at the 47th Trofeo Princesa Sofia IBEROSTAR on Monday with a 12-17 knot breeze providing great racing conditions and great competition. Giles Scott (GBR) won the second race and leads overnight, while Anders Pedersen (NOR) had one of his best day's ever to sit in second. Josh Junior (NZL) is third. The first race was won by Jake Lilley (AUS).

The best man to the top mark today was the new European Champion Pieter-Jan Postma (NED) who led both races at the first mark by a considerable margin. However in both races, he said, laughing, “but then quite a lot went wrong. My downwind technique was off and then I sailed out of the gusts and upwind I made two tactical errors, both of them pretty major.”

“I don't know why I am laughing, but it is a better start than the Europeans. I thought that my strategy and starts were amazing again, but the downwind speed and tactical errors cost me. But it was an amazing day of sailing. Palma at its best.”

In Race 1, Postma led at the first mark from Lilley and Jonas Høgh-Christensen (DEN). Lilley explained his race, “I had a really good plan and decided to start down towards the pin. I think I sailed a pretty conservative beat and went up the middle after the start and then managed to round second. In the last 200 metres of the run I managed to get past PJ, get the buoy room and extend to the right up the second beat. I managed to pull away from the fleet and then cruise down the run for the win which was very nice after a pretty tough Europeans.” He finished 36th there after hastily having his boat repaired just before the regatta.

“I've been working really hard. I have a new coach, we changed our setup drastically and I also have new boat because the one I had in the Europeans was totalled by a catamaran, so I had to get a new one. So I am really happy with how things are going now. I would have liked to start better in the second race but I'll keep fighting tomorrow.” Lilley placed 13th in Race 2 to end the day in fifth overall.

He concluded, “Beautiful conditions out there. Palma at its finest. We had some really nice rolling waves and 13-17 knots or so. Just beautiful Finn racing conditions.”

The wind increased slightly for second race of the day. Postma again rounded first, this time from European bronze medalist, Milan Vujasinovic (CRO), and Scott. Scott explained. “It had picked up a bit from the first one and the start line was reasonably square. The leaders to begin with came from the right, with a little tack up off the start line, and it was a little right favoured and then turned into a bit of a drag race.”

“I managed to get a good surf on the first quarter of the run and punch out into the lead. Then the Norwegian came out of the right on the second beat. I took the biased gate which was the left gate and I had tacked off to cover the guys on the right because in the race before we had fallen into each other heading right and the same thing happened. The Norwegian got past the other guys who went further left but I crossed ahead.” He extended on the final downwind for a comfortable win.

It is the first major regatta for the current world champion since the Finn Gold Cup in New Zealand in November. He chips in, “I did the Coppa de Brazil straight after that in Rio. I think there were 11 decent boats and if you think about it that's half the Olympic fleet.” He has been spending a lot of time in Rio and skipped the recent Europeans for more training on Olympic waters. But the Trofeo Princesa Sofia IBEROSTAR was an important regatta for him.

“Palma is quite an important step for us as we did a lot of work at the beginning of the year so we wanted to come here and see where we are at with the work, and hope it is moving in the right direction. Ultimately you can convince yourself of something in training, but it doesn't really count until you race with it, so that's the main purpose of the regatta for me.”

On the conditions today, “We had really good conditions. It's 2 o'clock and we are back on shore. In Palma that's unheard of. Normally we haven't even gone out on the water by now. So we are in for lunch, which is great.”

In the Olympic continental qualifier, the leading European is Egor Terpigorev (RUS) in 14th, with Ondrej Teply (CZE) in 17th and Pablo Guitián Sarria (ESP) in 18th. Allan Julie (SEY) leads the African selection in 48th, while Karim Esseghir (TUN) is 69th.

Racing in Palma continues to Saturday. The Finn fleet is scheduled to continue racing at 11.00 on Tuesday.