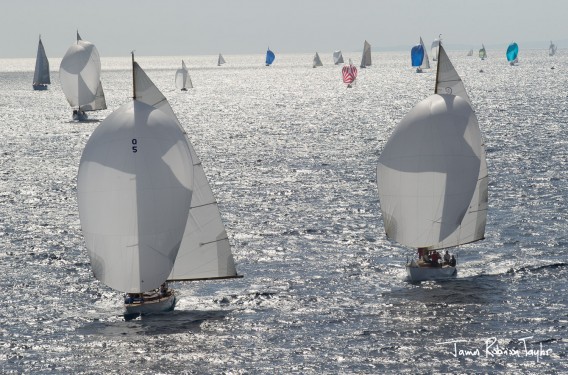 On the opening day of classic racing at the Régates Royales, Aeolus did his very best to make the eighty plus crews happy, despite a very disorderly and chaotic sea-state. The fleet, divided into seven classes, enjoyed a south-westerly of around fifteen knots, progressively increasing to a stiff twenty plus. Just when the race committee fired the first starting signal, with all the big boats on the line, a spectacular accident happened between Mariska and Elena, the 15MI barely escaping the worst, breaking free from Elena's huge bowsprit. Both had to go back to Cannes' Vieux Port and be submitted to a throughly check.

The rest of the fleet marched along on a long triangular race course, upwind to the buoy off La Napoule, before heading back to Cannes for a final leg along the beach. The Scottish-flagged J Class Shamrock V was, as usual the first to cross the line while the smaller boats fought on to better their position on corrected time. All their huge sails deployed, Moonbeam IV and her older brother Moonbeam of Fife – they were actually born eleven years apart- went head to head, finishing just a few metres away. Gaffers were also on their own turf today, showing all their potential and that sometimes “older is better”.

German Dragons on a high

After yesterday’s race in pretty light wind, won by Ivan Bradbury on Blue Haze, today the scenario was totally different.The 38 crews were kept waiting for some time at the pontoons but then enjoyed great sailing conditions on the windward/leeward race course set in the Golfe Juan, with some fifteen knots of south-westerly and a chop that made the tacticians' job harder. But not for Germany's Michaël Schmidt (M3) who after two races got to the top provisional spot just ahead of the Briton who only scored a fifth, whilst his countrywoman Gavia Wilkinson-Cox (Jerboa) jumped on the third step of the podium, even at points with Italian skipper Giuseppe Duca (Cloud). To make things even more exciting, the race committee went for a third race in an increasing south-westerly breeze.

There is a huge spar overhanging the Quai Laubeuf: it's Alcyon 1871's boom. She's a so called “Houari marseillais” a typical sandbagger from the Marseille's area owned by édith and Marc Frilet, who in 2012 commissioned an exact replica of a 19th century powerful racer. The Houari features a huge 150 square metre upwind sail area, with a LWL of 8 metres but an impressive overall length of 21 metres. Since these boats were produced and designed by local craftsmen, to recover the original plans édith Frilet had to consult the archives of the magazine “The Yacht”, a family book, and a collection of daguerreotypes. Local architect Gilles Vaton and yacht builder Daniel Scotto di Perrotolo were then able to start Alcyon 1871's costruction.

“These boats were custom built, between 1850 and 1890, in a very hands-on way. Owners and builders were very secretive about their designs too. Alcyon was my great-great-father's boat. He was called Emilien Rocca and was from an Italian family based in Genoa. He was one of the founders of the Société Nautique de Marseille (La Nautique) and before Alcyon he used to own Zingara, that was later sold to French writer Guy de Maupassant who renamed her Bel Ami II.” The Marseille sandbaggers were pretty extreme boats in terms of sailing area and beam, they were able to sail in as much as 30 knots of wind thus requiring a professional crew, many of them being Cape Horners or big tall ships sailors. When the British rule started dominating on the Cote d'Azur though, and when the metric classes became more and more popular, the Houaris underwent a fast decline because of their size, of their huge sail plan and movable ballast, inspired by North American sandbaggers. “Alcyon 1871 is faithful to the original boat, with her military gunter rig that inspired the Marconi rig. Her boom is 10 metres long and the bowsprit exceeds seven metres, she weighs five tons with 500 kilos of moving ballast (and a 1,90 metre draft) and 700 kilos of fixed ballast. Depending on weather conditions the crew could also put sand bags on board to increase the ballast from 300 to 500 kilos… On the other hand it's a boat that heels very little, thanks to her big beam and her flat bottom: you could compare her to a modern Mini 6.50 or an IMOCA 60' boat.”

For the ninth year the Régates Royales de Cannes are Panerai Classic Yachts Challenge's final act, an unmissable date for classic yachts. The international circuit sponsored by the Italian timepiece brand consists of four series: the Antigua Classic Yacht Regatta, the Panerai British Classic Week in Cowes, the North American circuit including the Marblehead Corinthian Classic Yacht Regatta, the Nantucket Opera House Cup and the Newport Museum of Yachting Classic Yacht Regatta. The Mediterranean circuit is also played out on four major events: the Voiles d’Antibes in France, the Argentario Sailing Week in Italy, the Mahon Copa del Rey de Barcos de Epoca in Spain and finally the Régates Royales de Cannes. The circuit's final scoring is calculated on the four regattas and for the four groups:Vintage, Classic, Big Boats, Spirit of Tradition.

For tomorrow, Wednesday September 23, Météo France forecast sunny skies and a decreasing south-westerly, going from force 6/7 gusting up to 8 in the morning, but later veering to the East and decreasing in the afternoon. The strong chop is also going to decrease during the day. In a word, another great day for racing in Cannes.