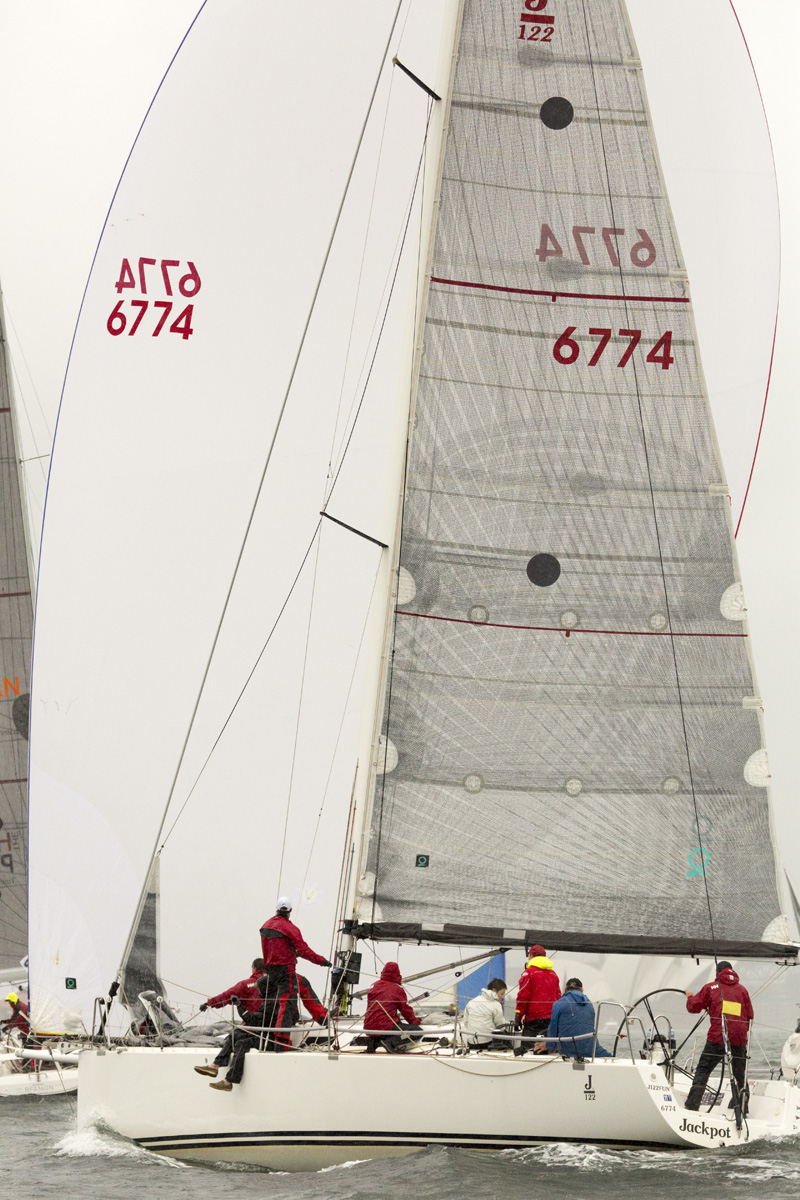 Race 8 of the Land Rover Winter Series was one for those whose boat and crews thrive in light fluky airs and so those boats prospered in the Cruising Yacht Club of Australia hosted series today.

Sailed on Sydney Harbour each Sunday during winter, and with the pointscore series coming to its conclusion on Sunday 10th July, it was a mad scramble to try and pick up a top three divisional placing in the hopes of making the final podium places at the end of the season.

The day’s conditions brought a few new names to the fore, amongst them relative newcomers, Gary Mason and Amanda Williams who co-own Division G winner, Jagged Edge, with Leon Ratner. The two only bought into the J24 in February, and today was their first race win.

“It was absolutely fantastic to win. Leon wasn’t with us today, so Greg Patterson did a great job steering the boat,” declared a chuffed Mason, who worked the bow while wife Amanda trimmed. Completing their crew was Katie Gray in the pit and Jerome Bellamy was at the mast.

Mason and his crew of four should be pleased. They defeated nearest rival, Fiction (Michael Blaxell), a Peterson 30, by close to five minutes. Steve Sweeney steered his Bonbridge 27, Hornblower, to third place.

“Amanda and I have only been involved in sailing for eight months. We took lessons at Pacific Sailing School and Terry Wise put us in touch with Leon, so we’ve been 50 percent owners with him for five months. We are complete converts now, after sailing the CYCA Monday night Twilights and now the Winter Series. We’ve also raced in a couple of J24 events,” Mason commented.

Two others who are not new to the winner’s circle reappeared there this afternoon.

Steven Proud skippered his Kernan 44, Swish, to a win over the TP52, Koa (Andy Kearnan/Peter Wrigley) in Division A1, just 15 seconds separating the pair on corrected time. Swish’s win has allowed her to take the Division lead from UBS Wild Thing (Geoff and Pip Lavis) by three points with just two pointscore races remaining.

“It was a light fluky day and the boat goes well in light fluky weather,” Proud said. “It was quite tricky, as the wind was up and down and all over the place,” he said of the breeze that ranged in strength from 4 to 10 knots, and spun around the compass, mostly settling in the west and south-west.

“You had to keep your boat moving, no matter what,” Proud commented. “We put a new longer bowsprit on Swish and increased our chute area by 20 metres, and had a good spinnaker run.

“We had a great race with Koa and from Steele Point to the finish line. We left Koa in our gas – we kept them in our dirty air to the finish. It was a good day despite the cold. It was freezing when the sun disappeared, but we forgot it when our 44 footer beat the TP52.”

“It was also good to have a bit of a shakedown for the (Land Rover) Sydney Gold Coast race at the end of July,” Proud ended.

In Division B, Jackpot’s win has put her within striking distance of a series win. Adrian Van Bellen’s J/122 is in second place overall now, a mere 2 points behind series leader, Alan and Tom Quick’s Beneteau First 40, Outlaw.

“It was pretty close between us and More Witchcraft,” Van Bellen said. “They got closer and closer towards the finish.

“What helped us was a great spinnaker run up the Harbour and the crew work. Whenever we do well it’s because of the crew – it’s not just about the skipper,” Van Bellen acknowledged.

“You had to get the tactics right – it was a very tricky day,” he finished.

The lucky winner drawn to receive the use of the Land Rover Evoque experience for one week was Division F winner, Speedwell, the Beneteau 34.7 owned by Colin Geeves, while Steven Proud was drawn to receive the Noakes Group prize of a lift stand launch and two free lay days, which will come in handy ahead of the Gold Coast race.

Sunday 10th July is not only the last pointscore race of the Series, but also the return of the Land Rover Twin Terrapod experience between 8.30am and 4pm on the hard stand.

The Twin Terrapod is a trailer based off-road simulator that allows the vehicles to climb between 43 and 48 degrees, achieving a height of nearly 6 metres above the ground on the hard stand. It is an exceptional way to experience the capabilities of the Land Rover and Range Rover, so don’t miss out.

Racing in the Land Rover Winter Series continues next Sunday from 11.25am.