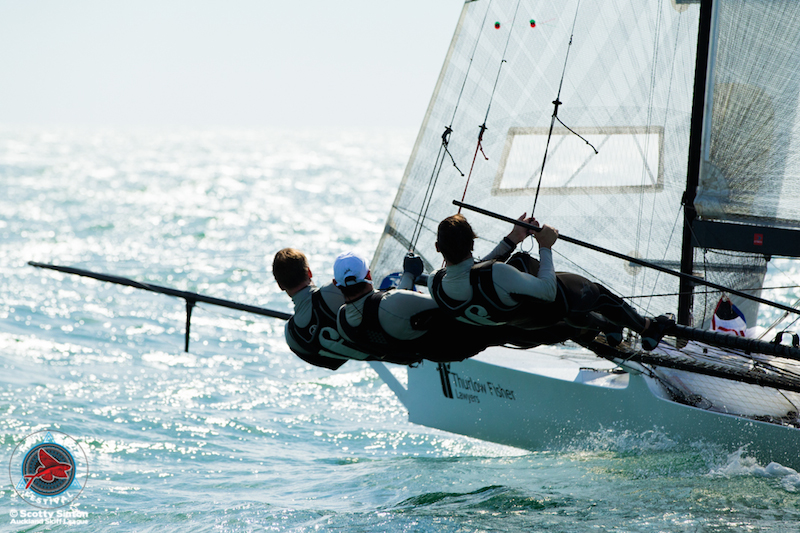 Perfect conditions welcomed the fleet to Fiji for the Mark Foy Championship and round three of the Triple Crown Trophy. After settling in to Fiji time, racing got underway at 1:30pm in a 12knot sea breeze and two windward/leeward races.

Race one got underway with a clear start and Thurlow Fisher Lawyers stuck their nose out in front and lead till the finish. The fight for second was a good one with a group of boats all close together.

Peroni, Compass Markets, Yamaha and Smeg continued their battle upwind with Smeg splitting from the fleet and heading out to the left. It paid off and the red boat moved in to third. But a spectacular cartwheel on the way to the finish saw them drop back.

In the end it was Thurlow Fisher Lawyers with Yamaha in second and Peroni in third.

The second race got underway quickly and saw Smeg lead from the start with Harken and Thurlow Fisher Lawyers right behind them. There was no change in the top three throughout the race.

Speaking after racing, Thurlow Fisher Lawyers skipper Michael Coxon explained the conditions as brilliant. “It was champagne with a bit of cheese as well, beautiful sailing. It is a great location.”

On the superstition of not winning the invitation race Lane commented, “I think Mike just lost the regatta with the first win.”

It was an exciting return to Fiji for the 18 Footers who last raced at Denarau in 1952. With 13 boats on the racecourse today and two more on the way it is going to be a close battle for the Mark Foy Championship. The pressure will be on the Yamaha crew to hang on to the Triple Crown Trophy. The Smeg team will be fighting till the end to knock the Kiwis off the top.

Racing continues tomorrow with race one scheduled for a 1pm start. But it is Fiji time so may be a little late.