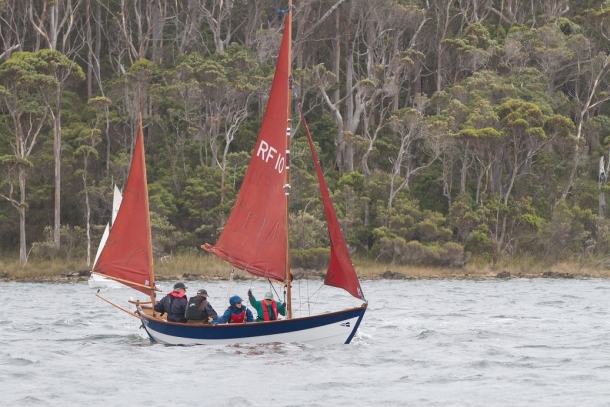 Fresh breezes at Walpole Yacht Club’s “Regatta in the Trees”  last weekend made for a great weekend of sailing. Competitors arrived at the little south coast town from Perth, Denmark, Albany, Bunbury and Busselton and kept rescue crews on their toes with capsizes a-plenty.

Local fire fighter John Fishwick was crowned “Person of the Regatta,” having made it his mission to coerce owners of Mirror dinghies in the district to drag them out of garages, haysheds and canvas covers, dust them off, repaint them and restore any missing deck fittings. His success rate was amazing, and even more so considering that as a fire fighter, much of his time in the all-important final weeks was spent protecting the district from devastating fires that swept through the area.  John was clearly a dedicated supporter of the regatta and a most deserving winner of the award.

Todd McVee sailed his Cherub dinghy Smurf Crease into first place, followed closely by promising female skipper Virginia Horn in Serenity Now and Brad Luketina in Panda Monium. This is the first time that Cherubs have sailed at the Regatta in the Trees and all have vowed to return.

After an exciting World championship in Busselton in December/January, the two handed Tasar class were still full of enthusiasm.  The winner was David Meehan’s Critical Path, followed by former Sharpie champion Trevor Date in Zailing and Bill Quinn’s Plan B.
East Fremantle’s Peter Coop was in total control of the single handed Sabre fleet, winning every race of the series.  Second place went to Trevor Holm and third was sail maker Graham Hill.

A special presentation was made to Kim Swarbrick and his cousins Glenn and John, recognising the contribution of the Swarbrick family to the Walpole sailing community.  In his acceptance, Kim referred to regattas of past years, when Olympic silver medallist Rolly Tasker joined sailing greats like Syd Corser and Huck Scott in the annual trek to Walpole – at a time that the road from Manjimup to Walpole was still heavily corrugated gravel.
The Regatta in the Trees remains unique in Australia, in that it has the support of virtually the whole town.  If enthusiasm really is infectious, then the spirit of Walpole will ensure the continuity of this fine event for many years to come.