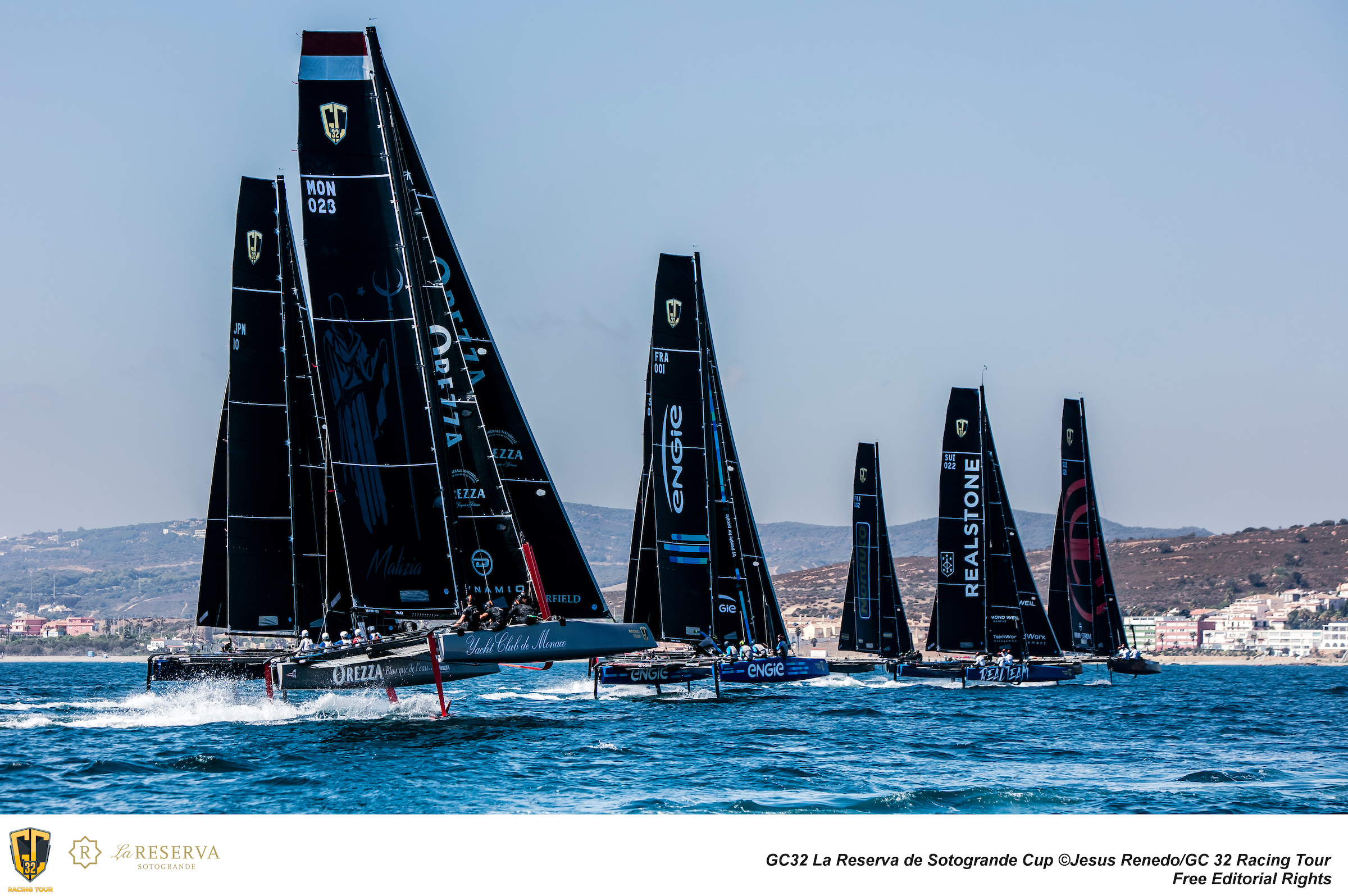 The westerly Levante breeze was expected to blow at about 10 to 11 knots for day three of the regatta, but the long white cloud hanging over the Rock of Gibraltar signified that there might be less. Even with just five or six knots the GC32s were still able to get on the foils as they launched off the start line of the first race.

Realteam took the early lead but skipper Jérôme Clerc couldn’t keep the more experienced crew of NORAUTO at bay.  It was only a matter of seconds before Adam Minoprio foiled past the Swiss crew and into the lead. Even NORAUTO looked vulnerable however, as ARMIN STROM took their turn at the front before Minoprio regained the initiative just before the finish, Flavio Marazzi holding on for second ahead of Team Tilt not far behind in third.

Two boats jumped the gun in the next start, ARMIN STROM and Malizia – Yacht Club de Monaco ordered to slow down and take their penalty by the umpires while the fleet sailed past. Trouble was, Malizia failed to slow down in time before the first turning mark and was black flag disqualified, forced to watch from the sidelines as the rest of the fleet sailed on. After a poor start, Schneiter weaved his way through the pack and took the lead before the finish, winning his first race of the regatta. NORAUTO had held the early lead but uncharacteristically was unable to keep the other boats at bay, being passed not just by Team Tilt but two other Swiss crews, Realteam and ARMIN STROM taking 2nd and 3rd respectively.

In the third and final race of the afternoon, Team Tilt pushed the start line hard and was rewarded with an early lead around the first mark of Race 12. These were the kind of conditions where anything could happen, and Team ENGIE did briefly seize the lead from Team Tilt at the bottom of the course. But not for long. Schneiter went in shore for what looked like better breeze and NORAUTO was on a charge too. ENGIE looked slow out on the seaward side of the course. This time it was Minoprio who was breathing down Schneiter’s neck, but the 21-year-old  birthday boy kept his nerve and won his second race of the day.

While NORAUTO’s lead remains fairly secure on 24 points, Team Tilt’s scores of 3,1,1 have given the Swiss a useful advantage over their rivals, with 40 points to Team ENGIE’S 50 points in third overall. ENGIE skipper Seb Rogues can’t afford any slip-ups however, as Realteam, ARMIN STROM and Malizia are all within four points of the podium as they head into the final day in Sotogrande.

The forecast for the final day’s racing is 10 to 11 knots from the west, which promises a thrilling showdown for the GC32s in Sotogrande. Sunday's racing begins at 1300 CET.