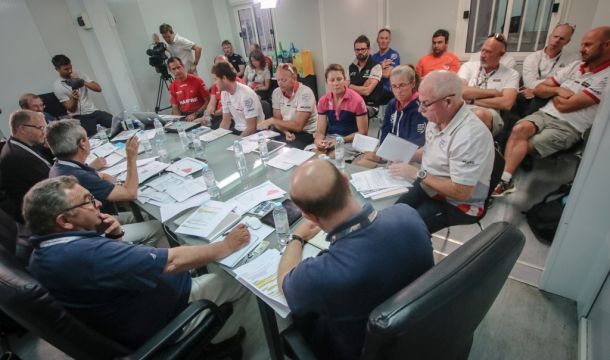 Team SCA (Sam Davies/GBR), Dongfeng Race Team (Charles Caudrelier/FRA) and MAPFRE (Iker Martínez/ESP) all admitted sailing the wrong way in Traffic Separation Schemes (TSS) and were each penalised a point to be added to their overall total in this low-scoring event. Additionally, Team SCA were given an additional penalty point for sailing into an exclusion zone (see Noticeboard for full details of all infringements).

MAPFRE drop back to 27 points, level with Team Alvimedica (Charlie Enright/USA), but the Turkish/American team move up to fourth courtesy of their better in-port record (see panel above).

All three teams admitted their infringements in the hearing, but said in mitigation that there had been confusion over how clearly the TSS zones had been marked and the angle the boats were allowed to sail within them.

“This gave us no advantage, it was an honest mistake,” Team SCA skipper, Sam Davies, told the jury. “There was no shipping in the vicinity at the time, so no safety issue.”

The jury was earlier given evidence from Race Director, Jack Lloyd, who said that the offences took place early in the 2,800-nautical mile (nm) leg from Newport, Rhode Island, to Lisbon, which started on May 17. The infringements were spotted by Race Control staff and corroborated by diagrams of sailing movements sent from the crews themselves.

Both MAPFRE and Dongfeng Race Team witnesses said that recently introduced guidelines of sailing in TSS zones had confused sailors and that improvements needed to be made in the future to assist crews from inadvertently breaking sailing rules.

Despite the decisions, the race is a long way from being decided. With the comeback of Team Vestas Wind (Chris Nicholson/AUS) to the fleet returning it to full-strength for Leg 8 to Lorient, France, the chasing teams still have the chance to cut drastically Abu Dhabi Ocean Racing’s lead before the final showdown to Gothenburg.

The Leg 8, 647nm between Lisbon and Lorient, begins on Sunday, June 7.

Representing the Spanish team, MAPFRE’s lawyer Luis Sáenz de Mariscal was present at the hearing along with the team’s navigator Jean Luc Nélias.

After hearing the final decision of the International Jury, the reaction of MAPFRE’s lawyer was clear, “This is an unfortunate incident; we committed a small error in navigation that took us in the wrong direction for about 700 metres inside Buzzard Traffic Separation Scheme (TSS). It is important to note that there was no merchant traffic, 6 knots of wind, full diurnal visibility and no danger to the navigation. The International Jury has penalised us for that and we have full respect such decision. Having said that, I do not agree with several issues involving these cases,” specified Luis Sáenz de Mariscal.

“First of all, with the data that is available to us (AIS position reports), Brunel also sailed inside and in the wrong direction in the Buzzard TSS. However, the Race Committee did not protest Brunel. It is important to note that boats are not allowed to protest for these issues and only the Race Committee may do so.”

Sáenz de Mariscal added, “Secondly, DongFeng breached the rule twice. The first time in Buzzard TSS – for more than one kilometre- and, about twelve hours later, for a second instance in the Boston to New York TSS – for more than four kilometres- (Mapfre had to change sails twice to respect that TSS). However, the International Jury decided to impose the same penalty to DongFeng (two breaches) than to Mapfre (one breach). Therefore, the penalties are not proportional to the breaches.”

Co-skipper of the Spanish team, Xabi Fernández also added, “In my criteria the principle of proportionality has not been applied here. One point in a leg represents many hours of sacrifice, work, effort,and even risking your life in some cases. An action that didn’t provide us with any kind of advantage, has been penalised with a point, and I feel that it is completely disproportionate. We believe there could have been another kind of sanction, such as time in stead of points, to compensate for the error, and which would not have distorted the general classification.”

Pedro Campos, Director General of the Spanish team declared, “I believe that a large organisation such as the Volvo Ocean Race should reflect very deeply about the degree of confusion which exists in regard to the rules which define it. In my opinion, when four out of six boats competing make a mistake, and three are penalised for it, the rules are obviously not clear, particularly given that the best navigators in the world are taking part in this race, and they spend many hours and much effort to prepare each leg of the race.”